The rapid development that is underway across many parts of the island seems to have disturbed some settlements, including in the Eastern Province.

With the end of the civil war, an area that has been consistently mentioned and has now become synonymous with land loss and grab is the southernmost village bordering Kumana National Park – Panama.

The Sunday Morning recently visited Peanut Farm in Panama, which does not have proper road access.

The remoteness of this village and its vicinity to the Kumana National Park itself make it an area where little to no development should take place, so as to not damage its biodiversity.

However, patches of forest seem to have been cleared recently to set up temporary abodes for budget travellers to the region.

Senapala, a resident of the area, said that they are purposely squatting in a prime beach property as they do not want some political goon to grab the land and profit out of it.

“We used to work in chena cultivation on the border of Kumana National Park and have done so for over three decades. As the war ended, the Forest Department demarcated the National Park and set up a high-tension fence to keep the elephants from entering the village. The chena cultivation was focused on planting corn, ground nuts, and peanuts, and was done at the edge of the forest.”

Unbeknownst to Senapala and the rest of the people of Panama at the time, in 2009, the then Government had declared the area that was fenced off as part of the National Park, thereby denying them access to their cultivation.

Prior to that, the people in Panama were issued cultivation permits annually for the bordering areas by previous governments.

However, later, these permits were revoked by the successive Government, which stated that the region was earmarked under a development plan that will be initiated in several stages; the project is to be completed in 2050.

The Sunday Morning spoke to Environmental Conservation Trust Director Sajeewa Chamikara, who has been working with the people of Panama for years to understand their pain points; he had conducted extensive studies in the area on the impact that these development projects could have on the environment and also the people who would be displaced due to land acquisitions by the state institutions in the months that followed.

“We cannot pin the blame on just one government, as regional development plans are rolled out in stages by successive governments. It is unfortunate that the people in the Eastern Province are the ones that are trapped by the multi-sectoral development projects that are underway since the end of war and which will go on till 2050,” Chamikara elaborated. 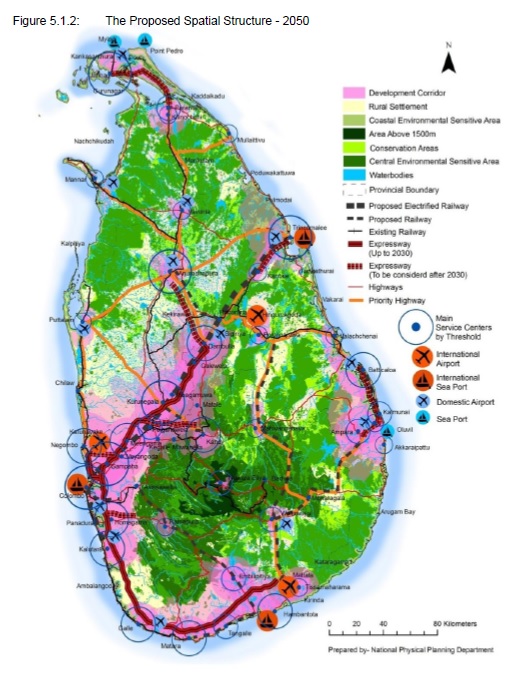 Chamikara added that the area is now being surveyed for the extension of the highway network, which is to continue from Kataragama towards the Trincomalee Harbour over part of these lands that have been acquired with no contingency plans to move the residents of the area to more suitable lands.

The question which the people from Panama posed to us was: “If the Government is acquiring these lands from us saying it is part of the forest reserve, how can they justify other tourism-related projects that are being established under the guise of tourism sector development of the country?”

It is this very question that has prompted people like Senapala to seek assistance from interested businessmen to set up temporary abodes amidst the area that is demarcated as forest land under Government Circular 5/2001.

“If they are not letting us cultivate anything, at least they should allow us to earn a living by renting out these temporary shelters to tourists that are visiting the area. Why should we allow some rich investor to profit from the land that we grew up in?” an angered Senapala questioned.

When questioned about whether this was the right choice that the villagers have made, Chamikara informed The Sunday Morning that while it is illegal for the residents to squat in state-owned land, it is a difficult situation even for law-abiding citizens to go and reason with them and explain the legal implications.

When questioning Senapala on the same, he noted that they would be willing to move out from the current property should the Government compensate them properly and give them a clear picture on what benefits they would receive from the development projects that are to be implemented.

Adding that many of the villagers had lost their ancestral lands due to the false promises made by many politicians over the years, he stated: “Not all of them would fight back like us; some are scared to be intimidated so they easily give into the requests of the influential people. Most of these villagers have now been relocated to a different village. That village has no water supply and the soil is so bad that they cannot cultivate anything,” Senapala added.

According to Gazette Notification No. 1152/14 dated 4 October 2000 published in terms of Sections 23A and 47 of the Amended Antiquities Ordinance No. 9 of 1940, an archaeological damage assessment should be done first and approval should be obtained for it. However, former Minister Daya Gamage laid the foundation stone for the Panama Housing Project without such approval, while the Department of Archaeology has not yet taken any action against it, alleged Chamikara.

“No Environmental Impact Assessment (EIA) was carried out before laying the foundation stone for the implementation of the Panama Housing Project. This has further escalated the human-elephant conflict in the area due to unplanned development. Former Minister Daya Gamage had acquired swathes of land during the Yahapalana Government from the Panama people in violation of the recommendations of the Human Rights Commission (of Sri Lanka), cabinet decisions, and laws in force in the country,” Chamikara alleged.

1,220 acres of land was acquired by the Navy and the Air Force which included the Buffer Zone of Kumana National Park, residual forests, mangrove forests, lagoons, and beaches that had been brought under the control of the Department of Forest and Forest Conservation during his tenure, thereby affecting the people living in the villages of Shastrawela, Ragamwela, Egodayaya, Horekanda, and Ulpassayaya, commonly known as Panama, he stated.

These lands were acquired with the intervention of the Navy and Air Force under the direction of former President Mahinda Rajapaksa’s Chief of Staff Gamini Senarath under the Regional Development Programme in 2013, shared Chamikara.

The acquisition was to build a holiday resort for foreign leaders and dignitaries visiting Sri Lanka.

In the face of this alleged land grab by successive governments, about 350 families living in Panama, engaged in farming and fishing, have been displaced for nearly a decade. Paddy farming and chena farming as well as fishing were the main sources of income for the people of this area. All of that is now lost.

In addition, the construction of electric fences by the Navy and the Air Force to cover these forest areas has resulted in the loss of habitat for elephants and leopards that live and migrate through the areas.

The lands belonging to the Department of Forest Conservation should be given back to all living beings to enjoy freely, Chamikara opined.

Upon investigations by The Sunday Morning, it was revealed that the development in these areas was in accordance to the Government Gazette Notice 2127/15 of 12 June 2019, which was the most recent update that took the country’s infrastructure and industry plans to the next step. And it was learned that the team in charge of this had followed the process stipulated in the Town and Country Planning Ordinance No.13 of 1946, Amended by Act No. 49 of 2000.

Speaking to The Sunday Morning, National Physical Planning Department Director General Madhawa Waidyarathna noted: “Regardless of which governing party comes to power, this plan will be executed accordingly and from this year onwards, we will be continuing the relevant development work in the respective areas.”

The process was also complemented with a series of studies and consultations by experts, development agencies, stakeholders, and interest groups, through which the plan leading to 2050 was rolled out.

Sunny Side Up: The minister who said ‘no’

August 28, 2021 byNews Admin No Comments
It is not often that you hear of a politician who says “no” to more power and responsibilities. However, it is now learnt that there is one such minister in the incumbent administration.

August 14, 2021 byNews Admin No Comments
While the people are dealing with crisis upon crisis, ranging from Covid-19 to economic desperation, the political arena was focused on an impending cabinet reshuffle.