November 23, 2020 by Dimithri Wijesinghe No Comments 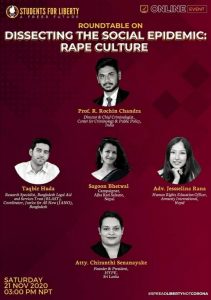 The conference was a short two-hour session where the panellists from the different regions of South Asia shared their works and knowledge about the ongoing rape culture in our societies. The panellists attempted to explore different aspects related to rape and how our governance system is trying to tackle it, each bringing in their own country’s perspective into the conversation.

A key highlight brought out during the discussion was the importance of debunking myths about the rape culture: Rape culture being a set of beliefs, ideas, or attitudes that have been normalised, perpetuated by the language you use, the objectification of people’s bodies, sexually explicit jokes, glamourising sexual violence, etc.

Each country representative put forth important myths within the rape culture that they believe cause the harmful cycle of rape culture to continue, with a major issue being the extremely prevalent sociological myth widely present in Sri Lanka that rape culture is propagated by the patriarchy and that it is a construct of men.

The thought that “men are trash” and it is of course their fault is a common trope that you or I, male or female, may have believed at some point in our lives, comfortably accepting that it is in fact the men. But the speakers brought forth an area that is underdiscussed and should be given far more attention that it has: Intra gender discrimination. It is the thoughts of women that the female rape victim experienced this because of “how negligent she was”, “she must’ve worn clothes that were not appropriate”, “she was looking for attention”, etc. These ideas are often perpetuated from within the gender itself.

This also lent itself to the victim-blaming aspect of it, which is the consideration of statistics for “false rape allegations”, and despite these statistics proving otherwise and that it is less likely the allegations were false, the question continues to get asked: Is she telling the truth?. The question here was that, much like rape, there are other heinous criminal acts faced with legal challenges in collecting evidence and proving in a court of law whether the perpetrator was in fact responsible. There’s murder, assault, battery, and yet why is it that rape is the crime where there is social and cultural concern of “are they telling the truth”, it was discussed.

It is concerning how sexual violence, an act of oppression, and the use of power dynamics and hierarchies is where the victim is left ostracised. The panellists shared that often, believing the victim is about acknowledging the struggle they have endured in coming forward and the uphill battle they have and will continue to face in their journey of having come forward.

This also lent itself to the myth of “men cannot be raped”, which was largely blamed on the media, particularly with regard to language used when it comes to reporting crimes of sexual violence against men. Taqbir Huda shared that at least in Bangladesh, when reporting rape of men, it used to be reported as sodomy, and even with the law providing for the protection against rape of male children, it was still reported in that way. He said the media failed the public in doing so and since then, things have changed for the better.

Huda said that for the longest time, it was believed that men cannot be raped, and also the act of “rape” was associated with female wrongdoing. That level of normalcy where women are raped because they did something wrong is no longer a valid argument and the narrative must now change. He said, therefore, it is imperative rape be understood not as a gender problem, but as a social one.

All participants shared the reason why it is important to debunk rape culture myths and that is in order to create the awareness that rape is in fact a social problem; they spoke of this under the topic of gender-wise statistics where they brought forth this prevalent belief that many have stated that as they are not rapists themselves or do not perpetuate those who have committed rape, it is not their problem.

Why does it affect us all?

To understand why it is a social problem, they introduced the theory that was put forth during the second wave feminist movement, which is the rape culture triangle. The first layer at the very bottom is “victimization”, the use of rape jokes, perpetuating that only women get raped, depends on what she was wearing, etc. The second level is “degradation”, which is slut-shaming, cat-calling, etc. The third level is “removal of autonomy”, which is the narrative of acts that were drug-induced, was intoxicated, etc. The fourth and final level is “explicit violence”, is rape, sexual assault, etc. This theory provides that this final level is supported by all other levels below it, and if you have taken part in any of the other levels, then you have contributed to the problem.

Particularly in this day and age, if you’ve done nothing to voice your belief against it, as it is the era of micro activism, we all have a voice and platform to make change happen. We can proactively campaign against something, and effect change.

‘Sri Lanka is safe, and still a fun country to visit’: Foriegn travel bloggers and journalists to promote Sri Lanka

April 16, 2021 byNews Admin No Comments
The Visiting Travel Blogger and Journalist Programme is an annual project which Sri Lanka Tourism hosts in order to diversify and spread the visitation of foreign travellers and also generate income f