December 13, 2020 by Jennifer Anandanayagam No Comments

With her welcoming smile and spirited persona, mezzo-soprano Tahanee Aluwihare had me instantly engaged a few minutes into our video call. While she chatted to me from her home just outside of Boston, Massachusetts on a “sunny but cold” morning about how the pandemic and social change are becoming catalysts for progressive ideas within the classical music artform of opera, I couldn’t help but become increasingly drawn into her vision for the industry.

Covid-19 has not left any stone unturned; the pandemic has caused many industries the world over to push the envelope, and performing arts hasn’t escaped its touch. Imagining a room full of elegantly clad audience members, eyes directed at a large stage decorated by singers and an orchestra, taking the form of a virtual creation in pandemic times is interesting to say the least. So when the Boston Camerata put out a distanced creation of Henry Purcell’s only opera, Dido and Aeneas, I was intrigued. 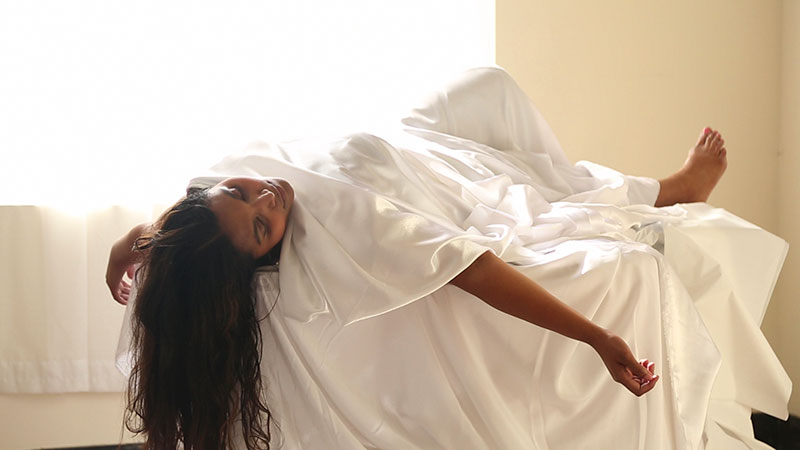 A distanced production of a beloved opera

Titled “Dido and Aeneas: An Opera for Distanced Lovers”, the opera was screened online from 14-29 November. The virtually staged performance was made with the combination of a principal cast – recorded live at Longy School of Music – and original silent films.

Aluwihare played the role of the widowed Queen of Carthage – Dido. One of the earliest known English operas, Dido and Aeneas is a beloved opera in the repertory. The opera performed in three acts tells the story of Dido who entertains the Trojan Prince Aeneas, shipwrecked on his way to Italy, where he will find a new Troy. Witches plot Dido’s destruction and eventually Aeneas and his sailors prepare to leave, to the delight of the witches. Aeneas separates from Dido, who kills herself once he has gone; her death is lamented by mourning cupids.

“Naturally, I’m biased towards the role of Dido,” shared Aluwihare. “She is such a complex character – strong, vulnerable, passionate, cool headed – that she’s a paradox, which makes her interesting to play.”

Aluwihare finds the role especially remarkable because of the time when the opera was written. “You realise that Tate (who wrote the libretto) and Purcell (the composer) envisioned this complex female protagonist several hundred years ago, in an age when the general understanding of women was very different. She’s a character who would not be out of place in today’s more progressive world!” 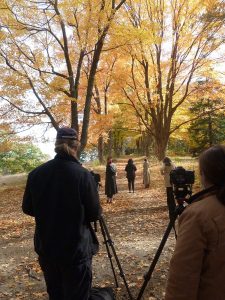 Boston Camerata behind the scenes

Commenting on the experience of being a part of a production made with the inevitable restrictions the pandemic brought in, Aluwihare said it was strange, of course, but that the whole team was very grateful to be part of something. “It gave us something else to focus on, aside from all the disappointing and sad things that have happened this year.”

The definite challenges came in the form of having to be very conscious of wearing masks at all times during rehearsals, and being as socially distant from colleagues as possible. “But there was also a certain amount of trust you had to have in your colleagues. We were all tested for Covid-19 before the rehearsals, of course, but you did have to have that trust to keep the whole team safe. I think it made us all realise that even in the dark moments of our history, art is a very important reminder of the beautiful things in life that keep us hoping for light at the end of this tunnel.”

Changing with the times

A powerful voice cutting over an entire orchestra is a combination of athletic ability, art, and science – and opera, to Aluwihare, is that. Currently in audition season, Aluwihare explained that a typical period for auditions would consist of multiple travels a month to different countries, but the pandemic has forced the industry to embrace something professional actors have been doing for years – submitting auditions online.

“People just do things the way they’ve always done them,” she shared, adding that Covid-19 has propelled even opera singers to move with the times. “It’s a good push forward for us, because there’s a lot of things we needed to step up to.” Virtual performances being another one of them.

Not being able to meet people and build audiences has brought a lot of attention to the importance of social media and connecting with people. Aluwihare feels that even though opera is better performed and consumed live and that there are some people who will not watch live-streamed versions, which to them “is like TV”, this push to innovate has made opera more accessible. And accessibility and breaking down myths surrounding the industry, it was clear, are deep passions for Aluwihare.

“We understand that there’s only going to be so many people interested in watching opera, but it’s important to not create barriers,” she enthused. “Sometimes, that barrier is about driving to New York City and sitting at the Metropolitan Opera; not everybody has the resources to do that. If you can pay $ 20 for a ticket (and a lot of these live performances are free), you can watch it on your laptop in your pyjamas, that becomes less of a barrier.”

Some of the reasons people don’t physically go and see operas, according to Aluwihare, have to do with money, the need to travel considerable distances to access the performances, and not knowing a foreign language, all of which virtual streaming takes care of. “There’s subtitles!”

Aluwihare hopes that this trend the pandemic has created in making opera more available to a less exclusive audience is something that’ll continue even after the world finally says goodbye to Covid-19. 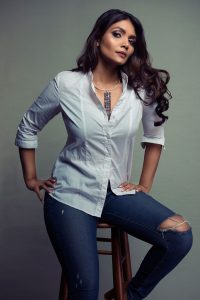 Born and raised in Colombo, she shared that while she was always involved in music, she doesn’t come from a particularly musical family. “So it was a fairly gradual process for me up until the point I encountered opera.”

Her family is very artistic, however, so conversations about art and music being important were commonplace in her home. Wanting to be a professional opera singer, Aluwihare sought the advice of several mentors, both in Sri Lanka and elsewhere. “I started to sing in choirs and gradually moved on to solos, and by that point, classical music was a big part of my life.”

Having lived in the US for almost 10 years now, Aluwihare spoke candidly about some the archaic notions around and within the industry and performing arts in general that are even prevalent in the US. But she is hopeful. Referring to movements like Black Lives Matter (BLM), she spoke of how important social change is in all of this, when it comes to holding people accountable, particularly within the opera circles.

Although there was conversation around it, there weren’t really any actionable steps being taken. With the huge impetus that movements like BLM brought about, Aluwihare feels the opera industry was pushed to move with it all, and pledge to make more diverse stories and hire more diverse people. “If this trajectory continues, I think we’ll be okay. The world was coming to a breaking point when it came to intolerance.”

Aluwihare explained that 50 years ago, there were very few singers of colour, but now, there are so many. Adding that anyone reading should take this with a grain of salt as she’s not an activist, she said she feels that waiting for social change to do our work for us is not ideal. Stressing on the need to have people from “unconventional places” be on Boards of Directors, Boards of Trustees, and panels, she said: “The people who are hiring are not reflective of the people that they are claiming to watch. The panel that’s listening to you needs to be diverse, and that has to be conscious. We’re seeing the singers becoming diverse slowly, but we’re not seeing the panels changing as fast.”

Aluwihare thinks the industry has to look inside and tell themselves “‘we haven’t done the best job’ and that’s okay. Lots of people are realising that”. The industry has to examine itself and ask the all-important question of what the heart of the artform is: What has been passed along from ages ago that is beautiful and important that has to remain, and what doesn’t really have a place in 2020.

“We can keep the music, but do we have to keep the idea that a princess can’t be a person of colour, or a prince can’t be a Korean or Japanese man? This idea that certain races are suited for certain roles, that’s an old idea, and it came along with opera, and that can leave,” she said.

August 12, 2019 bythemorninglk No Comments
Hilton hosted a high tea at L.A.B. – the restaurant’s lounge and bar – on 7 August from 3 p.m. to 6 p.m. in order to introduce their new seasonal produce.

Ashanthi De Alwis – Another side to the Lankan queen of pop