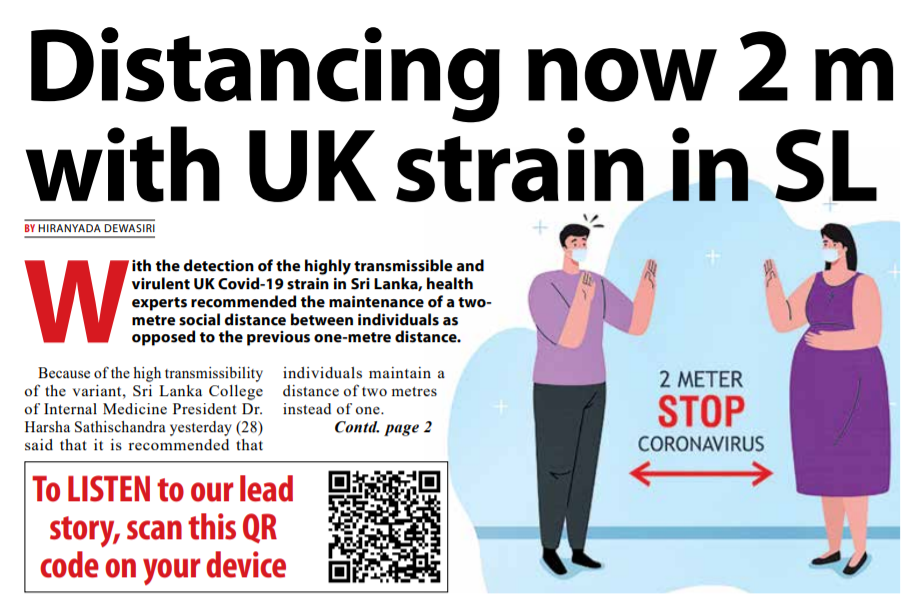 With the detection of the highly transmissible and virulent UK Covid-19 strain in Sri Lanka, health experts recommended the maintenance of a two-metre social distance between individuals as opposed to the previous one-metre distance.

Because of the high transmissibility of the variant, Sri Lanka College of Internal Medicine President Dr. Harsha Sathischandra yesterday (28) said that it is recommended that individuals maintain a distance of two metres instead of one.

“About 1,000 cases are reported daily from about 16,000 polymerase chain reaction (PCR) tests conducted, and the patients are showing more symptoms. Because of the high transmissibility, stay home as much as possible, wear a mask when leaving the house, and maintain a two-metre distance, as it is more appropriate.”

University of Sri Jayewardenepura (USJP) Allergy, Immunology, and Cell Biology Unit Director Dr. Chandima Jeewandara yesterday announced the detection of the SARS-Cov-2 variant B.1.1.7 (UK strain) in gene sequencing conducted on 42 samples collected from Colombo, Boralesgamuwa, and Kurunegala during the two weeks after the Sinhala and Tamil New Year.

“The USJP will be conducting further sequencing to find out as to what other variants are spreading in the country. The UK variant has a higher mortality rate of 55% and a higher transmissibility of 50%.”

However, Dr. Jeewandara said that the Oxford-AstraZeneca Covishield vaccine that is currently administered in Sri Lanka responds well to this variant.

The UK variant was detected in the community in Sri Lanka when a group of construction site workers in Boralesgamuwa were detected with the UK variant on 8 April, Dr. Jeewandara said at a media briefing.

As neighbouring India is reeling under a deadly second wave of Covid-19, Dr. Jeewandara said that the mutant variant that has been detected in India has not been detected in the sequencing conducted in Sri Lanka yet.

“We have not detected what is called the Indian variant in Sri Lanka. However, about 50% of the cases reported in Punjab and New Delhi are of the UK strain.”

August 31, 2020 bythemorningeditor1 liberty No Comments
There have been no casualties or damage to property as a result of the slight seismic tremor felt in Kandy last Saturday (29) night, The Morning learnt.

The true nature of the Govt. has been revealed: AKD compares it to an “Iceberg”

September 29, 2021 byRuwani Fonseka No Comments
While claiming that the true nature of the Government has now been revealed, Janatha Vimukthi Peramuna (JVP) Leader Anura Kumara Dissanayake compared the same to a melting iceberg at a press conferenc

Sputnik may be limited to one dose