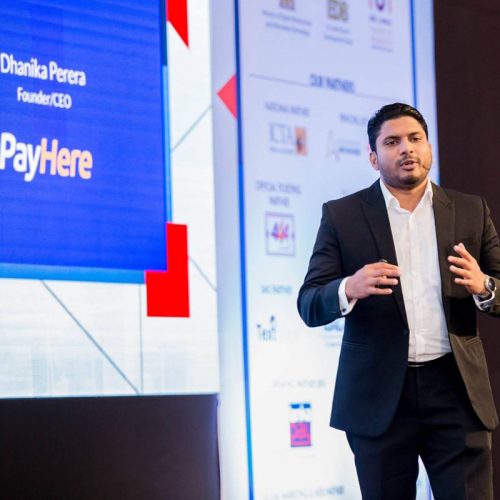 Forging a gateway to the world: PayHere

March 10, 2021 by Karen Hapuarachchi No Comments

Albert Einstein once said that “I am thankful for all those who said ‘no’ to me. It’s because of them, I am doing it myself”. The ability to “do it yourself” (DIY), which is deep-rooted in the era of the 1950s, has transitioned into the 21 Century as the trend that many YouTube influencers use to curate content that receives an average of seven million views.

One excelling entrepreneur who travelled the extra mile of bootstrapping both of his empires and stands as an example of this is Dhanika Perera.

A serial entrepreneur, engineer, Chief Executive Officer (CEO) of Bhasha Lanka, and Founder of Sri Lankan software products “Helakuru” (which received over five million downloads) and “ShopHere”, Perera is also the creator of PayHere. This wednesday, The Morning Business caught up with Perera in an exclusive interview.

PayHere, which initially started back in 2016, was launched as the first aggregated payment gateway service approved by the Central Bank of Sri Lanka (CBSL). PayHere offers a single solution for Sri Lankan businesses by allowing online transactions via all the global and local payment methods available in Sri Lanka.

PayHere was also inspired by Perera’s motivation to innovate and provide solutions from the challenges that can be seen in one’s daily life. The Founder also mentioned that he faced the aforementioned issue that many businesses and freelancers faced.

“I faced the problem of online payments myself when I started my first company, Bhasha Lanka. I felt the need for this as I was running a digital business, but there were very few ways to accept payments from my customers,” Perera explained. “This problem was shared amongst many businesses, thus this need was my very motivation to initiate PayHere.”

After PayHere was launched in 2016 as a technological solution to the aforementioned challenge that Sri Lankan businesses faced, the Sri Lankan payment gateway service red tapes from the legal aspect. As a result, PayHere had to stop its service shortly after three months of operation.

Perera stated that the unfortunate halt of operations was due to the lack of legal support to PayHere, adding that the company underwent a pivotal challenge of obtaining approval from CBSL as PayHere is an essential service in the country. Thereby, PayHere obtained the approval from CBSL within one-and-a-half years as a payment service provider and relaunched its service in March 2018.

“Our mission was to provide a technological solution for this online problem; we modeled a new technological solution, but at that time, there was no legal system to support that model we innovated. Thus, we worked with CBSL to get the legal support for the innovative business model we created. As a result, in 2018, CBSL issued a new direction which is called ‘Direction 01 2018’,” he revealed.

With this new direction, there was legal support for the model PayHere created, which supported its aforementioned 2018 relaunch. “After the idea came up about this innovative solution with our in-house engineers, we developed this within six months,” Perera added.

After the 2018 relaunch, Sri Lanka started utilising its service as their go-to online payment option. PayHere facilitated Sri Lankan business entities to accept online payments from their customers. As a result, the service provider started processing Rs. 1 billion within two-and-a-half years by mid-2020. “Surprisingly, it took us only six months to facilitate the second Rs. 1 billion. A month ago, we started processing Rs. 2 billion in online payments for the country,” Perera added.

Perera further explained that this unexpected growth within the last six months was heavily influenced by the effects of Covid-19 as well as the demand for online firms and e-commerce classes, and payments skyrocketed.

When queried about the Government’s response to the Sri Lankan payment gateway service, the PayHere CEO revealed that the legal challenges PayHere underwent was not directly from the Government. He explained that it was rather a challenge that involved bureaucracy as there was no legal provision for the business model that was initially created.

In addition to this, following CBSL’s approval, Perera also mentioned that PayHere reportedly received a recommendation from the Ministry of Finance, specifically from Secretary to the Treasury and Ministry S.R. Attygalle. Additionally, this recommendation involved a recent tweet from Attygalle which ranks PayHere as a Sri Lankan payment gateway service and the local substitution for PayPal.

“Getting a recommendation from the Ministry of Finance and the Government was a great achievement for us as a technological start-up grown into this level to serve the country,” Perera commented.

PayHere was founded by both Dhanika Perera and Co-Founder Chamika Weerasinghe. The company was reportedly a spin-off from Perera’s first company, Bhasha Lanka (Pvt.) Ltd. which powers Helakuru. It was highlighted that PayHere can be introduced as another service powered by Bhasha Lanka.

Nevertheless, this payment gateway service is licensed as a separate private limited company owned by three stakeholders: Perera, Weerasinghe, and another partnered company known as Emerging Media, which is PayHere’s marketing partner.

“It also should be noted that we will not be able to create a service provider such as this without the help of our partnered banks and financial institutes. We work closely with Sampath Bank, Seylan Bank, and Nations Trust Bank, as well as telecommunications companies Dialog Axiata and SLT-Mobitel for the payment processing that we facilitate for local merchants,” he added.

Perera reported that the service provider is fully owned by Sri Lankans, also revealing that he funded the company initially from profit earnings from his other companies. In other words, he went on to describe that the investment involved was bootstrapped as PayHere did not have any initial funding in the beginning. It was also highlighted that there were no external loans or investments taken into account for the establishment of the company.

As a result, the Co-Founder and other partners of the firm followed his example and invested their own capital into the establishment and developed it to the current PayHere service provider.

“I am a firm believer of the bootstrap concept. For instance, my first venture ‘Helakuru’ is also a bootstrap. We have never taken any external funding or bank loans. Thus, I’m applying the same philosophy and attitude to PayHere as well. However, we always welcome collaborations,” Perera said.

As this can be another example of Perera’s will to “do it himself”, he also mentioned the importance of collaborating with other companies to uplift both parties and develop its status as well as products and services.

Furthermore, Perera also shared that PayHere consumers were pleased as it is affordable and diverse in the type of companies which can obtain this service, compared to other payments options provided by banks. This was also said to be one of the benefits that the Founder envisioned and aimed for when he established PayHere.

“Payment gateway services were available directly from banks previously, but it was not that affordable for a start-up or SME (small and medium-sized enterprise) type of business. At that stage, being a start-up ourselves, I wanted online payments to be a commodity item that any business can afford and access,” he explained.

In addition to this, the PayHere pricing strategy was planned to cover all segments of types of business, affordability, and accessibility. Thus, start-ups and SMEs would have a better option and corporates would be provided with more value additions when using these services. Perera further added that due to its welcoming pricing strategy, PayHere received demand from the very beginning and developed a large consumer base. It was also mentioned that PayHere was featured on a global GFCR report as the payment gateway service in Sri Lanka with the largest consumer base with over 2,500 members.

PayHere service plans include PayHere Lite, PayHere Plus, and PayHere Premium. PayHere Lite is targeted at start-ups where the company does not charge any registration fees. It was mentioned that the company only charges a commission when the start-up accepts an international payment. PayHere Plus is targeted at SMEs as the company charges a monthly fee and a commission, while PayHere Premium includes a higher monthly fee which also comes with many value additions.

In addition to this, freelancers or individual consumers who wish to use the PayHere are recommended to register themselves as a sole trader, as PayHere has legal regulations where it can only provide its service for businesses. “The beauty of this is that consumers can accept payments in different currencies such as dollars, euros, and other non-LKR currencies from foreign countries,” Perera added.

Moreover, he expressed his gratitude to his team in the journey PayHere has travelled and credited his team from Bhasha Lanka by ranking them as the technological strength behind himself as well as the support provided by the Co-Founder.

On the other hand, he also mentioned that any market involves competition, but that he was delighted to introduce a payment service provider model to the industry which allowed non-financial institutes to fill the gaps in the market which was especially related to the technological aspect.

“Because of our inception, the legal system and regulations of our country were adjusted or made flexible to support even non-financial institutes to come into the picture to fill the gaps involved, which ultimately benefits not only the businesses but the consumers as well,” Perera stated.

It was further noted that unlike other financial institutes such as banks where the consumer would have to visit the office to register for its service, PayHere accompanies the ability for consumers to register via its website. As such, the registration would be approved within a week, he said, also highlighting the convenience for consumers the PayHere website provides.

Furthermore, Perera expressed his mixed feelings regarding the expansion of the business to international markets. It was noted that PayHere would take baby steps into developing into a local payment gateway service empire before making plans to expand to global markets to take on competitors such as PayPal.

“Nevertheless, I still see many gaps in the payments industry in regard to the technology. Thus, my first priority will be filling those gaps. So we have much to do as our mission is not yet completed. When this is completed, we will explore opportunity in the global markets as well,” he shared.

Lastly, Perera highlighted that there are several plugins of PayHere that consumers can use on their websites and apps. Merchants can use the website for queries regarding the history of transactions, details about accounts, and registrations.

Many might acknowledge that PayHere has come a long way from the inception of Perera taking it upon himself and his partners to provide this solution to the country whilst existing as a pivotal example of DIY.

Union Assurance has been recognised as one of the best workplaces, ranked among the top 10 in the Banking, Financial Services, and Insurance (BFSI) industry in Sri Lanka. The accolade from the Great Place to Work (GPTW) Institute affirmed the company’s strong commitment to enriching its work culture and empowering[…]