Do you take issue with drone surveillance?

November 22, 2020 by Dimithri Wijesinghe No Comments

Speaking to Military Spokesperson Brigadier Nihal Hapuarachchi with regard to utilising a drone regiment, he shared that it is multi-purposed and holds technical importance, especially considering emerging soft operation trends in war scenarios, natural and man-made disasters, floods and other catastrophes, special emergency circumstances, chemical warfare, and outbreak of community-infected epidemics – much like the current Covid-19 pandemic.

He stated that the new 15th Drone Regiment in the SLA is well equipped with high-tech cameras that enable operations within short and medium distances and quadcopters with observation cameras for surveillance purposes in military or non-military applications, adding that it is for the purposes of engaging in reconnaissance duties, gathering of sensitive information, and others with a view to further strengthen national security needs and related concerns.

Drone surveillance in areas under lockdown

We spoke to Mattakkuliya Police Station Officer-in-Charge (OIC) Bandara Dewatagoda in this regard. Given the area being one of the high-risk isolated zones due to Covid-19, he shared that the drones are deployed twice a day – early morning and in the evening – in order to monitor stragglers who may not be following the Covid-19 health guidelines issued for their specific high-risk area. 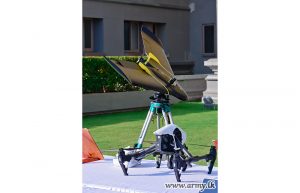 A couple of the drones being utilised by the Sri Lanka Army’s 15th Drone Regiment on display.

Officials at the Kotahena Police Station shared that while monitoring is done utilising CCTV cameras, to their knowledge, it is done in association with the armed forces and the Covid-19 Monitoring Unit at the Police Headquarters.

When asked whether they faced any issues due to this constant surveillance, they shared that it has only been a great assist as there is awareness created among the public due to the presence of these drones, that “we are not to take matters lightly and that it is a matter of national security”.

We also spoke to a number of residents in these areas. They said that while drones are deployed to survey the streets, a majority of citizens in the area showed a complete lack of concern. Many said they hear the drones flying around, and when the authorities spot people disobeying lockdown restrictions, they are immediately taken away.

When asked if they worry that these drones, which essentially function as an extension of the Government’s eye on the public, raise any concerns with regard to privacy, many said that as these are extenuating circumstances as a result of the pandemic, the authorities must take every possible step to ensure the rules are followed.

However, there were a few who expressed some concern; they fear that by allowing this to happen, they may be setting a dangerous precedent which allows the Government to spy on them at any given time of the day.

An individual from the LGBTQI+ community shared that they worry the Government may use this new drone operation to prosecute them. “I already feel unsafe as it is, with the law not allowing me any protection, but if this surveillance continues, what’s to stop them from looking into our private lives and how we go about our daily affairs?”

In other parts of the world

In a research paper titled “Drones and aerial surveillance: Considerations for legislatures”, George McNeal of Pepperdine University School of Law shared that the prospect of the expanded use of unmanned aerial vehicles has raised concerns for lawmakers and has led the call for legislation mandating that nearly all uses of drones be prohibited unless the government has first obtained a warrant. 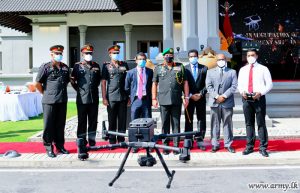 In America, privacy advocates have succeeded in lobbying and convincing the majority of the states to enact laws to regulate the use of drones by law enforcement authorities, with some states requiring a warrant before the government may use a drone.

The Office of the Privacy Commissioner of Canada provides that in terms of the current situation in the country so far, there has been no indication that drones are being used for general surveillance or to gather personal information. However, Canada’s privacy laws will apply to drones deployed by public or private sector organisations to collect and/or use personal information.

Meanwhile, the UK is very clear and advanced in its approach to privacy rules; the protection of privacy goes so far as to include a “Surveillance Camera Code Compliant” when dealing with police forces, pursuant to their Protection of Freedoms Act 2012.

After taking into consideration the approach of various governments towards privacy laws and drone surveillance, let us take a look at Sri Lanka’s legal stance on the matter.

Right to privacy is a term you may have heard yelled out loud in the West as often westerners would tote their right to privacy. Having consumed a fair portion of western media, it would come as no surprise that many Lankans assume they are in a similar situation. However, most are not aware of the local laws – or lack of – on privacy. 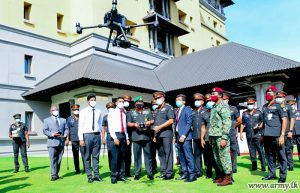 Chief of Defence Staff and Army Commander Lieutenant General Shavendra Silva (centre) operating a drone, flanked by Army officers and others, at the inaugural ceremony of the 15th Drone Regiment of the SLA

Our Constitution recognises fundamental rights; Chapter 3 affords us these rights and that much we know for certain. However, it does not explicitly mention the “right to privacy” as a fundamental right.

However, the International Covenant on Civil and Political Rights (ICCPR) does recognise this right, and Sri Lanka has adopted the ICCPR Act as a domestic law. Sri Lanka is a dualist country requiring us to incorporate any conventions we may sign at the world stage, and we went ahead and afforded the ICCPR this privilege in 2007.

The grey area comes in with the existence of the Sri Lanka Telecommunications Act which provides that individual persons cannot tap other people’s phones, but it does not go on to elaborate whether the state can or cannot do the same.

If Sri Lanka’s defence forces wish to deploy drones to survey the streets, they can do so on the basis that they are not violating any citizen’s constitutional right or are not in breach of the laws in Sri Lanka.

Despite the current laws as they stand, there exists a need for the protection of privacy and a call for constitutional reforms for the identification of the right to privacy as a fundamental right, along with the provision of a clear interpretation of the scope and extent of the right to privacy and how it should be balanced with other considerations such as the right to information, freedom of speech and expression, national security, and public health. This is partly a debate on legal philosophy and partly a debate surrounding the utility and risks of recent technological innovations. 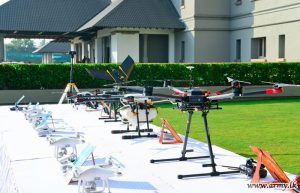 A display of the drones available to the 15th Drone Regiment

The Centre for Policy Alternatives (CPA) has made their case with regard to the lack of identifying the right to privacy as a fundamental right, and the need for it. CPA Senior Researcher Bhavani Fonseka shared that the issues posed by the use of not only drones but any kind of technology here is due to the lack of a clear framework.

She said there needs to be clarity with regard to who will monitor, as there is the possibility of oversight in the abuse of the technology, and it could possibly be used to minor and critique minorities.

Moreover, while it is stated that the technology would be used to survey isolated areas and apprehend lockdown guidelines violators in the context of the current pandemic, there is no clarity in how it will be carried out or who will operate and utilise the technology, leaving room for abuse of the technology.

Fonseka shared that it is not that technology is inherently bad and should not be used, but that rather when it is utilised, it must be done with a clear framework with means to hold persons accountable.

Good For You, Good For Planet

September 17, 2019 byThe Sunday Morning No Comments
Sea erosion, more commonly known as coastal erosion, is the process of the removal of sedimentary rocks at the coastline thereby leading to a loss of land and retreat of the coastline landward.