‘Dolce Vita in Serendib’: A small encyclopaedia of Italian cuisine

If there’s anything Sri Lankans and Italians have in common it is our love of food, and on Tuesday (14), the Italian Embassy in Colombo launched the coffee table book Dolce Vita in Serendib, a gastronomic journey of authentic Italian cuisine in Sri Lanka. The book holds a repository of epicurean treasures with over 60 Italian recipes beautifully interwoven with tales and accounts of Italy’s culinary history. 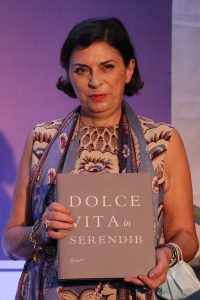 Ambassador for Italy in Sri Lanka and the Maldives Rita Mannella

Eight restaurants in Sri Lanka have contributed recipes of their signature Italian dishes while both the Ambassador and Deputy Ambassador’s well-loved recipes have also been added into the book. The featured restaurants – Aqua Forte, Capital Bar and Grill at the Shangri-La, Dolce Italia, Echo at the Cinnamon Grand, Lago Italian Bistro, Mount Lavinia Hotel, Park Street Trattoria, and Tintagel – were handpicked as serving the most authentic Italian fare.

Complementing the flavours within the pages is an array of narratives chronicling legend, history, anecdotes, and tales that surround Italy’s romance with food. Quirky, factual, historic, and fun, the articles start off with an introduction to fashionable food and feisty flavours, travelling through time with wine, cheese, pasta, ham, olive oil, coffee, gelato, and pizza, go through the history of etiquette, slow cooking, the Mediterranean diet, and kitchen culture, while also adding a reality check with the conservation of food.

At the launch event of the book, Ambassador for Italy in Sri Lanka and the Maldives Rita Mannella who penned the book together with renowned writer Savithri Rodrigo, said: “The idea of publishing a recipe book showcasing Italian cuisine came to my mind almost immediately on my arrival. I wanted everyone to try preparing, eating, and enjoying Italian food in their own home, with authentic Italian recipes. As an Italian, it is universally well known that we love our traditional food. I’ve also seen the deep appreciation and love for Italian cuisine among our Sri Lankan friends and this is no surprise as Italian food is truly universal.” 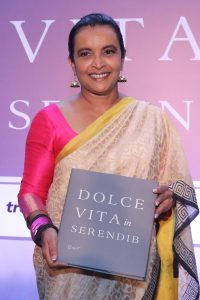 Also speaking at the launch event, Sri Lanka Tourism Chairperson Kimarli Fernando mentioned that she was delighted to see the diversity of cuisine and cultures in Sri Lanka being showcased, noting: “The Italian Embassy in Colombo’s tribute to the country’s expansive culinary offerings, with particular reference to Italian flavours is truly exciting. The multi-cuisine flavours Sri Lanka offers is truly unique and one of the country’s USPs (unique selling propositions) which I believe we need to build on. It is exciting to see this book showcase the authenticity of flavours that Sri Lanka offers – whether it’s in five-star restaurants or stand-alone boutique restaurants. This is a good start to placing Sri Lanka as a cuisine destination.”

Speaking separately to Brunch, Ambassador Mannella explained that Dolce Vita in Serendib partly came about as a project to work on during the lockdown when everything else came to a standstill. “I am an active person, and not having my usual engagements was difficult,” Ambassador Manella shared, adding: “This project was the panacea for the boredom that was threatening to set in. Also, when we began speaking with the restaurants, it brought people together which is the primary objective of a diplomat. We were a group of people who spoke the common language of cuisine. But it also meant that because of the lockdown, our access to restaurants and their cuisine was limited. So while this is our first edition, we are hoping a second edition will become a reality featuring more restaurants.”

Noting that being able to explore the intricacies of Italian cuisine and its deep-rooted history was one of her favourite parts of working on Dolce Vita in Serendib, Ambassador Manella also shared with us what she found most challenging, saying: “Transforming a recipe book into a book of art was most challenging. I wanted to make this book a work of art, a masterpiece that adds food for thought. I want it to be placed on a coffee table, where people socialise and become a topic of conversation rather than be among the recipe books on the shelves of a kitchen.” 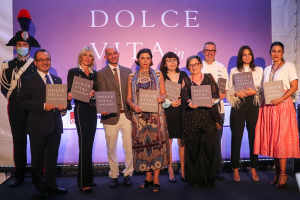 Guests at the event holding copies of ‘Dolce Vita in Serendib’

As an Italian diplomat and ambassador for Italian culture in more ways than one, Dolce Vita in Serendib was still a learning experience Ambassador Manella, who said that one of the most unexpected things she learned while working on the book was being able to hand-make the iconic Italian pasta fettuccine. 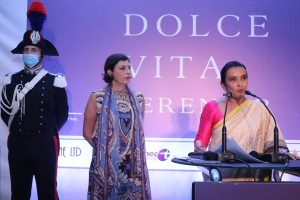 Foodies ourselves, we also asked Ambassador Manella, which recipe in Dolce Vita in Serendib she finds the most irresistible, and learned that Dolce Vita in Serendib has the recipe for a sinfully delicious chocolate cake. “It is just heavenly,” she shared, adding: “In fact, one of the guests who received the book, had made it and told me it truly was the best chocolate cake in the world, which also means that the recipes have been tried and tested. I also like the Vitello Tonnato – a veal recipe with a tuna and anchovy sauce, which is not a restaurant meal but rather a family meal as it is made absolutely fresh and is a summer meal that brings the family together. That’s what Italian cuisine is all about – the love, joy, and togetherness that all happens over food.” 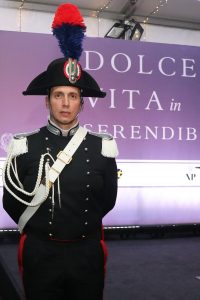 Savithri Rodrigo who collaborated on the narrative aspect of the book also shared her thoughts on the experience, noting that her favourite aspect of working on the book was being able to learn new things. “Delving into the history of Italian food such as pizza, pasta, coffee, and my favourites – the cheese and wine – which though part of our everyday lives, we know very little of when it comes to origins, uses, and evolution was incredibly exciting,” Rodrigo said, also noting that this was a double-edged sword: “Summarising all the research I came across – there was an unimaginable amount of information which took me ages to read and decipher but while summarising all that was challenging – but the findings were a true repository of extraordinary information.”

Rodrigo’s most unexpected learning from the book was just how fascinating Italian cuisine is. “Finding out that Italy was truly the food capital of the world, how food is centric to everything in Italy, the intertwining of food and fashion with the arts, how master painters depicted the emphasis of fresh produce in their oeuvres, learning that Italian food is not just pasta and pizza but an infinitely expansive epicurean discovery, those absolutely ostentatious banquets and gosh…etiquette – what gems were in there! I now know how to – and how not to – eat pasta,” she said, adding that she simply couldn’t decide which recipe she liked more. “I can’t choose…I simply can’t.  Each recipe is better than the last and each one, becomes a favourite, unfortunately.”

November 20, 2022 byNews Admin No Comments
Despite the fact that the Budget 2023 received more negative remarks than positive ones from the people in terms of short-term relief, it has touched on certain progressive measures that the country c

The killing of wild elephants

October 5, 2021 byNews Admin No Comments
On 4 September, a cattle farmer informed a local conservationist that for over a week, an injured elephant had been wandering the borders of a forest near the Abakola Ara, not far from the boundary of