Don’t let your personal prejudices get in the way of creating content: Blok and Dino

The Sri Lanka Development Journalist Forum (SDJF) recently held the fourth edition of their Media 4 Everyone series titled “Gender-sensitive media content, SO WHAT?”, speaking with award-winning content creators Blok and Dino, on gender-sensitive media content and its importance. The discussion was moderated by gender and women’s rights consultant Sharanya Sekaram. The SDJF has been working towards achieving gender equality for over 10 years, driving many initiatives to come closer to achieve this goal.

Blok and Dino is an award-winning duo of content creators, Gehan Blok and Dino Corera, who have a combined 20 years of experience in the fields of journalism, broadcast, and media. 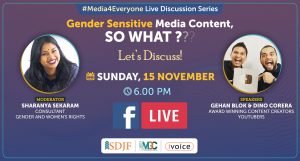 The pair spoke about their content creation process, sharing that they actively work to break stereotypes with lots of subtle, subliminal messaging that goes into the language that they use as well as in the characters they build, addressing tropes like minor staff being immediately wrongfully accused when something goes missing or the elderly being portrayed as vulnerable and dependent, and showing that this isn’t always the case.

Blok and Dino also spoke about breaking brand stereotypes and fighting misinformation about brands and the social and ethnic groups that they’re related to, explaining that they do not consider things like race, religion, or social class when approached to work with brands. Blok and Dino cited the example of Pick Me, which is perceived to be a Muslim brand, saying that when working on their Pick Me content, they decided to create something so funny that even the most racist person would be amused and consume the content repeatedly.

Blok and Dino sometimes draws criticism because Corera and Blok frequently portray female characters themselves, which can be seen as insensitive and reinforcing negative gender stereotypes, but Blok shared that this is simply because their brand is “Blok and Dino”, and their audience expects to see them in their content, and when the pair do portray female characters, it is only main characters that they portray themselves. Blok also commented that when creating such characters, focus is always given to the character and Blok and Dino actively avoid running down the women they portray unless the situation is very specific, like in their sketch the “The Tanhadasas”, which saw both main characters being evil but in completely different ways when angling for the better share of their mother’s estate.

Blok and Dino shared that the content culture in Sri Lanka tends to run down women with creators tending to resort to rude stereotypes for laughs, shares, and views. This is also what brands tend to look for when looking for brand conversion. This is something Blok and Dino doesn’t compromise on, insisting on creative freedom. “We don’t do ads, what we do is content marketing. It takes some convincing to make brands understand it’s not an ad but a story that connects organically with the brand, talking about its USPs (unique selling points) and brand values in the course of the storyline. It’s like a trojan horse that gets the message across to the customers.”

Blok and Dino also shared that they have the luxury of being able to decline to work with brands when values don’t align and brands aren’t able to step away from the traditional approach.

Speaking on media and gender sensitivity, and sharing views on why sensitivity is an issue, Blok and Dino shared that a major problem is that most creatives in mainstream media are underpaid, and as a result, end up moving on to better opportunities, and the talent that remains is not always the best. Blok shared: “If you want to retain quality talent, you have to pay them properly. That’s the absolute truth.”

Another issue that affects sensitivity in media is the fact that most, if not all, media companies have some sort of political alliance or affiliation and are biased towards one party or another, and even if creators try their best to create sensitive content, it’s hard because the powers that be are affiliated to someone. Advertising also comes into play. If an article is written against a company, there is often the threat of advertising being pulled immediately, and advertising revenue is crucial to keeping media businesses going.

Radio also plays a huge role in spreading gender-sensitive messages. Corera shared that especially in morning radio, there is the chance to address deep issues humorously and casually because the audience is more or less captive in their cars on their way to work or school. “Good radio involves a lot of planning, scripting, and chemistry between the hosting personalities as well. You can talk about anything, provided you sugarcoat the bitter pill correctly. Which is what good late-night hosts and comedians do.”

Blok and Dino also spoke about women content creators and comedians, sharing that with Sri Lanka’s present online audience being predominantly male, female comedians will inevitably face added discrimination and hate because of their gender, adding that these are deep-seated cultural issues that need to be fixed over time with thoughtful strategies like education reform as well as responsible reporting. Blok and Dino also pointed out that the audience is maturing which is a good sign, and in a few years, we are likely to see a lot of women content creators coming out.

Sharing advice on how to create more sensitive content, Blok and Dino encouraged creators to challenge the norms and usual stereotypes that we see. They encouraged creators to understand there is currently a set way of telling a story that is not sensitive and to change this. To correlate different characters and break the status quo. They also stressed that creators need to take responsibility. Sensationalism is not the only way to get a message across; creators need to be more thoughtful about the messages that they’re putting out there.

Personal bias is also very important. “Try and be unbiased,” Blok said. “Don’t let your personal prejudices get in the way of creating content. You can’t be affiliated to any party or religious denomination. All of that needs to be left behind. The one thing you need to pay attention to is being a normal human being.”

Working with the human mind

August 8, 2021 byNews Admin No Comments
The scientific study of the mind and behaviour, psychology is a subject that has gained momentum over the past decade. All around the world, psychology is being applied to a plethora of industries suc

August 24, 2021 byNews Admin No Comments
With World Suicide Prevention Day fast approaching on 10 September, and all of Sri Lanka in lockdown until the end of this month (hopefully), it is important to take a step back and reflect on the imp