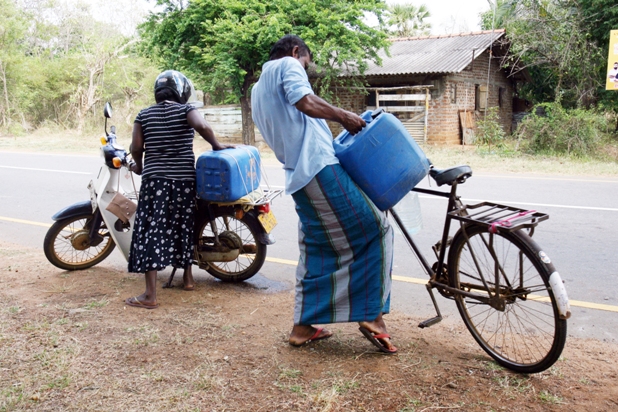 The ongoing heatwave has increased the amount of water consumed by the public. But with little to no rainfall reported from the catchment areas, Sri Lanka’s groundwater levels and quality seems to be fast depleting. As of 14 March, the island was reporting the onset of drought conditions in seven districts, namely Kegalle, Ratnapura, Kandy, Kalutara, Gampaha, Puttalam, and Matara. The effects of the drought have been felt by 103,445 persons from 29,615 families, causing drinking water shortages in the said areas.

According to the Disaster Management Centre (DMC) report on the current situation, among the worst-affected areas is the Mahakumbukkadawala Divisional Secretariat (DS) in the Puttalam District, which is home to 19,328 persons from 6,215 families. The Sunday Morning recently visited some of the families in the area to inquire about the challenges they are facing due to the prevailing weather.

En route to Mahakumbukkadawala, we observed that many of the paddy lands in the area had just finished their cultivation cycle and the water bodies adjacent to these paddy lands still had sufficient water in them. Therefore, one could presume that the drought had just started to settle, causing the groundwater quality to change and increasing the concentration of minerals that are diluted.

The Sunday Morning first stepped into the Mahakumbukkadawala DS to inquire about the drinking water shortage that its grama niladhari divisions are facing currently. Mahakumbukkadawala DS Assistant Divisional Secretary R.P.N. Udani told us that there are 23 grama niladhari divisions in the area and that the DS office’s Disaster Management Unit (DMU) was distributing water through a 4,000-litre tractor bowser and a 13,000-litre full-sized water bowser.

“Since there are 23 grama niladhari divisions, water is distributed to these families on a rotation basis and per day, we try to cover at least two to three grama nildhari divisions. We have made arrangements to place 1,000-litre water storage tanks to be shared by several families living in the vicinity. The water is distributed by the DMC free of charge,” Udani explained.

In hopes of witnessing the water distribution routine around the area, we headed towards Mudalakkuliya, just 13 km from the DS office. As instructed by the DS office, we turned from the 28 km post inland to speak to some of the residents affected by the drinking water shortage. As we took a turn towards Kehelhenayaya, there was a water tower at the top of the road, which left us questioning whether it was not serving any purpose to the village.

Stopping at R.H.M. Karunaratne Rajakaruna’s residence, we initially intended to inquire about the drinking water shortage and how the drought had affected their daily lives. However, it was Rajakaruna’s daughter who first spoke to us and when asked about the ongoing drought, she jumped to clarify that what they were experiencing at present was hot weather and not the drought.

“At the end of every cultivation cycle, it is normal to have a dry spell as this, but if we do not get any rain by the time we are scheduled to start our next cultivation cycle, that is when we can deem the drought has settled in. This generally takes place during the months of August or September,” she added.

Rajakaruna, who was in the backyard, decided to join us for a brief chat.

“The people in our area have faced a lot of difficulties due to the water shortage. You might have seen a water tower at the top of this road, even that was built after the villagers made several pleas to the government and private organisations to provide water to the village. In 2010, the water tower was built and only in 2013 were the pipelines laid out to the houses and the water connection was given,” Rajakaruna explained.

However, the water supplied through the water tower is not always consumable and is used for bathing, washing, and watering the household plants. For the purpose of cultivation, they use water from the Surakkulama Reservoir, Rajakaruna noted.

“The water tower at least helps us in meeting our day-to-day water needs. But the water supplied is most often hard water and is not suitable for drinking. We have to therefore purchase filtered drinking water at a cost of Rs. 2 per litre,” Rajakaruna added.

Detana is another settlement where 22 families live. According to its residents, the village has been around for little over 40 years. The tractor bowser had just made its way to distribute water to the families and we were able to speak to some of them.

We were also told that the drinking water issue is continuous, where the families have to purchase drinking water often and only during a drought are they supplied with free water from the DS divisions.

“We cannot drink hard water; therefore, we purchase filtered drinking water from a private company. Apart from that, we are also able to get drinking water from Sangattikulama Sinhala Kanishta Vidyalaya, which has a reverse osmosis plant fitted. However, one must pay a membership fee to obtain water from the school,” R.M. Nirmala Sewwandi informed.

The village had not received rainfall for about three to four months now. According to L. Dhammika Jayalal Pathirana, many of them had therefore opted to do labour work or brick manufacturing.

“With erratic weather, it is never easy to stick to farming. One season you will be lucky to experience favourable weather and reap a good harvest, and the next season your crops might get completely destroyed. However, even finding labour work is becoming quite challenging these days as there is not much development work taking place closer to home,” stressed Pathirana.

Heading to Kokichchamkulama, which is home to 52 families, another alarming aspect was revealed. The pipelines had been laid for most of the homes, but they are yet to receive a water connection. Until such time, all they could resort to is digging tube wells in their backyards.

R.M. Indra Padmakanthi, speaking to us, informed that she settled in Kokichchamkulama in 1991 and the village has been facing a shortage in consumable water for as long as she remembers.

“Several governments and presidents have been elected but our problems are still the same. This village does not have a proper water supply system. We were promised that a water connection would be given but that too has halted after the pipes were laid out. We have now dug wells in our gardens so we have water for our daily needs,” said Padmakanthi.

However, the water is not suitable for drinking due to its high concentration of minerals and Padmakanthi, and the rest of the families have to depend on purchased water. Even water distribution does not take place all the time as the DS office can only supply them free water during a drought.

We noticed the tractor bowser filling the 1,000-litre storage tank placed in front of Padmakanthi’s house. That tank is supposed to provide drinking water for about 15 families living in the vicinity and lasts for about three days if they use the water sparingly.

No water resources in the vicinity

Responding to our inquiry on what measures the DS office has taken to provide the necessary water connections for their residents, Assistant Divisional Secretary Udani stated: “There are no water resources in the Kokichchamkulama area, which means we will have to establish a water pumping station. Following several requests, the Samurdhi Scheme allocated a budget to initiate the water connection for the area, but that was only sufficient to lay the pipelines.”

Udani explained that the closest water resource was in Anamaduwa and if the waterline was to be pulled all the way from there, the cost would be quite high. The other option was to dig a deep well, create a water source, and then establish a water pumping station. While the DS has listed the requirement under the area development needs, Udani believes it would take another two to three years by the time the budgetary allocations are approved and passed to the DS office.

So far, only part of the Mahakumbukkadawala DS is supplied with water from the Anamaduwa Integrated Water Supply Project (the water supply line to which is taken from the Inginimitiya Reservoir), but that too is not fulfilling the water requirement of all the grama niladhari divisions of the area.

“Some of the grama nildhari divisions have been able to establish community water supply projects and through the committees they have appointed, they have reached out for funding through private organisations and have successfully built water tanks. Even then, the water they get is not suitable for drinking, but it fulfils their day-to-day requirements,” Udani confirmed.

She also noted that people had dug up tube wells but even in those, the water levels were receding due to the dry weather conditions. Therefore, the DS office had taken measures to supply water to such areas.

In this backdrop, the Government has taken measures to supply 150,000 new domestic water supply connections by end-June at a cost of Rs. 1.2 billion, the National Water Supply and Drainage Board (NWSDB) announced.

Meanwhile, the NWSDB also stated that it is facing difficulties in fulfilling the water supply demand in certain areas as the feeder pipelines need to be extended towards areas which do not have existing pipelines. This is estimated to cost prospective consumers close to Rs. 20,000 as down payment to renovate roads when new pipelines are laid out.

In order to ease the consumer burden of having to pay Rs. 20,000 upfront to obtain a new water connection, the Cabinet of Ministers had approved the proposal made by Prime Minister Mahinda Rajapaksa in his capacity as the Minister of Urban Development, Water Supply, and Housing Facilities to obtain water connections without inconvenience by paying Rs. 2,000 initially and the balance in instalments over a 10-month period.

April 11, 2021 byNews Admin No Comments
The Colombo District Court has issued an enjoining order effective till 19 April, barring the holding of the election of the Sri Lanka Medical Council (SLMC).

Sunny Side Up: Mahindananda gets tough

August 1, 2021 byNews Admin No Comments
Minister of Agriculture Mahindananda Aluthgamage was last week at loggerheads with farmers during a meeting convened in Anuradhapura to discuss the issues faced by the farming community in accessing f