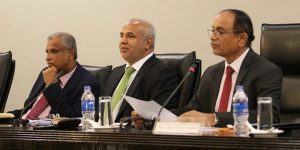 Peiris, testifying before the Parliamentary Select Committee (PSC) probing the Easter Sunday Attacks criticized the TID for waiting on instructions from the Attorney General’s (AG) Department instead of arresting terrorists connected with the NTJ.

“The TID does not need to wait for instructions to proceed with their arrests. The fault lies with the TID for not taking actions.” Peiris said.

However, MP Sumanthiran pointed out that according to previous witnesses who had testified before the Committee, the AG’s department had failed to respond to requests from investigative agencies seeking advice on potential terrorist suspects.

“There had been several investigations by the Police and TID. As a part of those investigations, the investigating officers have sought your instruction to proceed. According to the witnesses who testified before this committee, the AG Department did not provide them with the advice they had sought,” MP Sumanthiran highlighted.

In response, Peiris said the TID need not wait for the AG’s advice and was empowered to arrests suspected terrorists.

“The TID could have arrested the suspected terrorists on their own without having to ask others. They sent us three files which were incomplete. Those files did not have anything substantial to form an accusation in order to file a case.  One of the files contained nothing but two speeches and printouts of posts taken from Zahran Hashim’s Facebook page. We cannot file a case on such material. The TID has a trump card for every delay.” Peiris said.

Diplomatic surveillance: No complaint from Canadian HC yet

March 9, 2021 byNews Admin No Comments
The Ministry of Foreign Affairs (MFA) is yet to receive any official complaint regarding the surveillance of diplomats in the country, The Morning learnt yesterday (8).

Group of lawyers accuse MR of misleading the public

December 3, 2018 byEaswaran No Comments
A group of lawyers have accused former President Mahinda Rajapaksa of attempting to mislead the public.