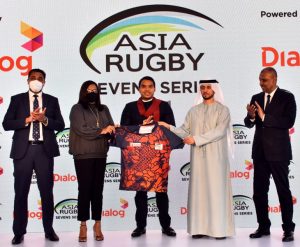 The culmination of the three-legged Asia Rugby Sevens Series is set to be in Dubai, United Arab Emirates (UAE), this Friday and Saturday, 19 and 20 November.

Dialog Axiata PLC will be the title sponsor of the much looked-forward-to event. The announcement in this regard was made at a special media briefing held at the Port City Gallery in Colombo on Monday (15).

“I don’t have to introduce Dialog to rugby and it was in 2012 that they partnered with us (the national rugby team) when I was playing (in it). Dialog is a very strong partner for rugby and, not only rugby, for most of the sports in Sri Lanka,” Youth and Sports Minister Namal Rajapaksa, who is also former Sri Lanka rugby Captain, said on the occasion.

Asia Rugby Sevens Series 2021, to be hosted in Dubai this time, will be a culmination of the traditional three legs of the tournament played across Asia to pick the qualifiers for the Rugby World Cup.

The 10th edition of the quadrennial Rugby World Cup is set to be held in France from 8 September to 28 October 2023.

Asian Rugby Sevens was launched in 2009 with China, Hong Kong, India, Korea, Malaysia, Singapore, Sri Lanka, Thailand, and UAE being hosts through the 11 years since then. The 2021 Asia Rugby Sevens Series will be hosted as two tournament events in the UAE following the cancellation of the 2020 series due to Covid-19 pandemic.

“Asia has the biggest potential to popularise this sport that we all love, making it a truly international sport for all, both male and female,” Qais Al-Dhalai, President, Asia Rugby, who too was present on Monday, said.

“Asia Rugby’s ultimate objective is always to partner with a reputable and efficient organisations, which we found in Dialog (which is) super fit,” said Al-Dhalai whilst also adding that Asia has over 130,750 registered players, 450,000 regular participants, as well as nearly 1,000,000 social media followers illustrating the Asian strength of the game of rugby.

Dialog, together with Asia Rugby, launched a unique fan jersey yesterday (see photo) with a view to capturing “the spirit of rugby in the Asian continent”.

The fan jersey, designed and stitched in Sri Lanka, encompasses the vibrant colours and unique designs of Asia as well as sporting the map of the continent on the right-hand sleeve, which incidentally has the highest viewership for rugby in the world.

The fan jersey would be available in all sizes at all leading fashion retail outlets for a price of Rs.1,650/=.

Not only rugby, but Dialog Axiata is also the proud sponsor of the Sri Lanka national cricket, volleyball, and netball teams. The company also has a close association with the President’s Gold Cup Volleyball, Junior Volleyball, National Junior and Senior Netball Tournaments, Schools Rugby League, the Knockout, and Sevens Tournament too.

August 2, 2021 byRevatha No Comments
When and where will the Proteas play their matches next month in SL?

July 18, 2019 byRevatha No Comments
Will the SL cricket coaches be shown the door soon, after their first-round exit from the ICC World Cup?

November 15, 2021 by Ruwani Fonseka No Comments