December 4, 2020 by Dimithri Wijesinghe No Comments

Considered the oldest building in the Colombo Fort area and dating back to the Dutch Colonial era, the Old Colombo Dutch Hospital has held great significance to the people of Colombo, and even more so since its adoption as a heritage building and a shopping and dining precinct back in 2011. 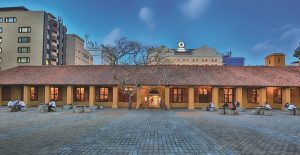 The Dutch Hospital Complex celebrated its ninth anniversary on Wednesday, 2 December, with the merchants of Dutch Hospital gathering to commemorate the occasion. Notably far less grand than in the past years, this year saw a quiet affair, with Christmas decorations going up, but exuding far less a sense of exuberance than times gone by.

We spoke to each of the merchants that gathered for the occasion, about their way forward, how they had made adjustments for the first Christmas since Covid-19 wreaked havoc globally, and also how they hope to carry out their operations come 2021. The merchants brought a unique perspective to this matter, especially considering that the complex was heavily reliant on tourist traffic, and with tourists taken entirely out of the equation, their circumstances have drastically changed.

We asked the merchants whether their mindsets lean more towards hope for things to soon go back to normal once the pandemic is dealt with, or whether they are preparing to make some very real changes, considering the possibility that things are less likely to ever really go back to “normal” and we might be facing a drastically different arena in business.

We have to start somewhere: Harpo Gooneratne

Harpo Gooneratne, of the Harpo’s-owned Colombo Fort Café, shared: “It has been nine years. From a seasonal point of view, I must say that we are opening after one-and-a-half months; we were under lockdown and things have not been great, but we have to start somewhere. So we thought, since it is December and it is the festive season, let’s get this place up and running.” 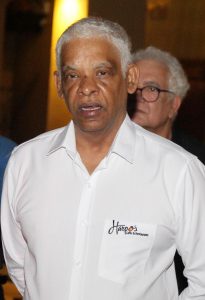 “We are of course trying to remain positive; all of us, we can feel the good times coming up. We have stuck it out for nine years and we can do it for a few more” Harpo’s Founder/CEO Harpo Gooneratne

He added: “Not forgetting that we are celebrating nine years, which is a great achievement. It’s a great iconic building that has been restored by His Excellency President Rajapaksa. It has benefited a lot of people in Colombo from both a touristic point of view and even from a local consumer point of view; it has been a great venue for people to come and sit in, and wine and dine.”

Harpo also noted: “Last year was awful. We had the Easter Sunday disaster and since then, there has been a huge dip. From then, things improved a bit in November and December last year, but since then, the industry has not been able to resurrect itself. We are of course trying to remain positive; all of us, we can feel the good times coming up. We have stuck it out for nine years and we can do it for a few more.”

Sharing some of the more specific changes they are making for their outlets, he said: “Beyond the health regulations, and adhering to all of that – and of course that we had to change our menus and what we offer has been switched up – there is a lot more focus on the local market and what they can afford.”

“We are hopeful; we will do what we can to keep the business going. We have cut down on the number of pax we can host, and with all the safety guidelines, obviously there is a huge drop. This time last year, we were very busy, and if we were to get busy again, we will still have the responsibility to follow those guidelines. We are mainly focusing on delivery, but we have traditionally been a very high-footfall kind of operation, and we will move to a more intimate laidback kind of setting during the next few months. We are focusing on things like ghost kitchens that are focusing only on delivery,” said RnR Operations Manager Sampath Perera.

All that we can do is encourage everyone to be safe: Dharshan Munidasa

“It is 2 December now, and the second wave came around only two months ago. It is difficult to predict anything, and I think all that we can do is encourage everyone to be safe,” said Dharshan Munidasa of Ministry of Crab and Next Innings, adding that in terms of changes, they had made some effort to appeal to the Lankan market and had seen some breakthroughs. 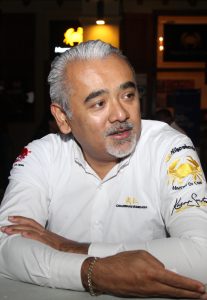 “Since September, we were doing alright, I suppose, under the circumstances. We saw a little bit of traction and went right back to zero – these are trying times for all of us” Ministry of Crab Co-Founder Dharshan Munidasa

“We have introduced the crab biryani, which came around during this pandemic, and our Indian partner shared that no one has ever made a crab biryani before – not a single crab biryani in a single famous restaurant in the world, and so we kind of own it now.

“That has been how things are going; crabs are not cheap, and we do not want to reduce the quality of what we do,” he said. “We are down by 95%, and just a few months ago it was a  negative 100%. Since September, we were doing alright, I suppose, under the circumstances. We saw a little bit of traction and went right back to zero – these are trying times for all of us.”

He shared that when they reopened in end-May, the Government was also talking about opening the airport by end-August; they had hoped things would get back to normal soon enough, but of course, it hasn’t been the case.

“For the moment, we are not looking towards anything much. We are looking to get PHI (Public Health Inspector) approval, so we can at least get some live music here, get a two-piece band playing, hopefully at least for the month of December, and maybe attract the local crowd to the complex. Otherwise, it will be like a dead one,” he said, adding: “We won’t be doing many changes because we can’t afford to in this current climate. It is unpredictable and we do not know how anything that would affect the way things will turn out in order to move forward,” shared Heladiv Tea Club Operations Manager Shane Cramer.

He shared that for their establishment specifically, they were rather reliant on the staff workers from the World Trade Centre. He said that Heladiv Tea Club, unlike a number of the other establishments in the vicinity, experiences an even split between foreign and local customers. However, due to safety regulations and locals working from home, they have experienced a dip in sales as well.

“We are really just taking cues from how everyone else is going to be moving forward, and we will play it by ear. We have a lot of special gift offers and also corporate offers for our customers, and we have heavily focused on making lots of new products for the festive seasons, changing our themes, and developing our range,” shared Spa Ceylon Operations Manager Chandana Nishantha.

“We need to limit our production and we decided to re-look at what we do to make it better, and re-look at our designs – we’ve been doing that for the last eight months. Yes, we retailers have been affected badly,” said Dominic Sansoni, from Barefoot.

Dominic shared how they have been adjusting, considering the new climate. “Barefoot in Colombo is a bit of a destination,” he said, adding that he was happy to see people come and enjoy the garden, regardless of whether they shop or not, and that these norms have changed.

“Of course, the lack of tourism has taken a big chunk of customers away, but we are a 56-year-old company, and the backbone of everything we have done has been our Sri Lankan clientele. Our place must be interesting to Sri Lankans, and if it is a place where Sri Lankans like to go and they enjoy it, I think a traveller would also want to go there – and I use the word ‘traveller’, not ‘tourist’,” he added.

Sansoni shared that they have people who have been their clients for ages, that they come from all walks of life, and that “it’s not at all just a Colombo thing”.

About the future and moving forward during these pandemic times, he said: “We have had to realise we can’t make any long-term projections, so we re-evaluate often and frequently. The news changes every day.” 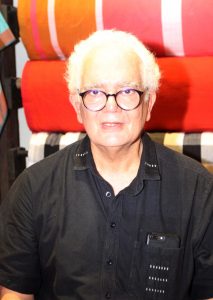 “Of course, the lack of tourism has taken a big chunk of customers away, but we are a 56-year-old company, and the backbone of everything we have done has been our Sri Lankan clientele” Dominic Sansoni

As for what Barefoot is doing that is new, he said: “Barefoot will go online. It is something we have been talking about for ages, but we’ve been putting it off. This gave us a big jolt and very soon, the Barefoot shop online will be working, and the main target for that will be Sri Lankans. But looking ahead, we would hope that things would come back to normal. I can’t speak for everyone, but I do not know what the new normal would be.”

He went on to share a little more about the Barefoot online store, saying: “I must be honest, it will not be as large as we would like it to be. There will be restrictions for various reasons as to what we will show online. We get a lot of interest from the Sri Lankan diaspora.”

Sansoni shared with us a lovely story of how a lady abroad had sent pictures of a saree she had bought 25 years ago, which still looks fantastic to this day, saying she would like to purchase another. He noted that they would start making some things that would be specific for the online store, but added that “it’s a long process; it will be a few months before we get there”.

“Everything behind this is people,” said Sansoni, adding: “And we must do the right thing by the good people who work with us.”