Early modern man: Out of Africa and into Sri Lanka

Sri Lanka made waves over the weekend when news broke of a landmark archaeological discovery in the Sri Lankan rainforest of ancient tools and the second-earliest use of bow and arrow technology in history by Homo sapiens or modern man.

The site of the discovery, the Fa-Hien Lena Cave, is also the site of the earliest discovered human fossils in South Asia. Located deep in the rainforest in Sri Lanka’s Kalutara District, the cave and its excavations have revealed fascinating insight into early Homo sapien life and culture. The weapons and other man-made tools and objects discovered in the Fa-Hien Lena Cave date back 48,000 years.

The Fa-Hien Lena cave, site of the discovery.

What makes this discovery so remarkable

The reason archaeologists and scientists the world over are taking note of this discovery is because it is the second chronological example of modern humans adapting to their environment and using sophisticated weapons like bows and arrows to hunt. The only other earlier discovery of humans using tools of this nature was made in the Sibudu Cave in South Africa with the fossils and tools found there dating back 80,000 years.

Humans are believed to have moved out of Africa approximately 50,000 years ago migrating in groups to form communities and populations all around the world. To a large extent, it is believed that early human groups stuck to coastal areas and were accustomed to living in coastal settings and hunting marine life and megafauna.

This discovery in the inland rainforest in Sri Lanka proves that early human migration didn’t stick only to the coastal areas of the country; the groups of humans migrated inland to form communities in wetland rainforests and other non-coastal environments and adapted and evolved their hunting methods to thrive in their new environments.

The discovery also paints a picture of what life would have been like for early humans on a social and cultural level, with the discovery of artefacts like bone needles, beads, and other decorative and cosmetic objects.

The team behind the discovery

The historical site was first discovered by Dr. Siran Deraniyagala, with excavations taking place from 2006 to 2012, with involvement from the University of Sri Jayewardenepura and Sri Lanka’s Department of Archaeology. The years since have been spent analysing and authenticating the findings from the cave with archaeologists, scientists, and researchers from the University of Sri Jayewardenepura in Sri Lanka, the Max Planck Institute for the Science of Human History in Germany, the Griffith University in Australia, and Sri Lanka’s Department of Archaeology all coming together to collaborate and share resources and expertise.

Excavations at Fa-Hien Lena in progress.

The Morning Brunch reached out to archaeologist Oshan Wedage who has been part of the project since excavations first began.

What the discovery means 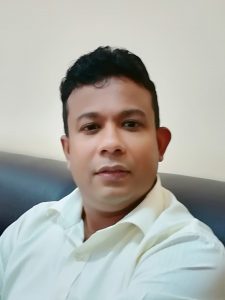 Wedage explained that early humans have shown evidence of adaptation to different environments, developing toolkits as they went along to adapt to hunting in the region they were in. The majority of evidence has suggested, however, that early humans stayed close to the coast, particularly early humans in Sri Lanka. The discovery of these fossils in the inland rainforest is exciting because it shows that humans were moving into inland environments as early as 50,000 years ago and successfully establishing communities and adapting to thrive in their new environment beyond what one would expect.

The majority of early hunting tools focused on hunting megafauna or large mammals who moved slowly. What’s interesting about the tools discovered in the Fa-Hien Lena Cave is that they show clear adaptation to hunting smaller, fast-moving mammals as opposed to megafauna. This makes sense as smaller fast-moving mammals like monkeys and deer are what you would expect to find in the area.

Analysis of the over 130 bone arrowheads found at the site shows that they were part of other weapons and were attached to shafts. The size and weight of these arrowheads, however, show that they could not have been used as spears or blow-darts, which is unprecedented, save for the discoveries in South Africa. 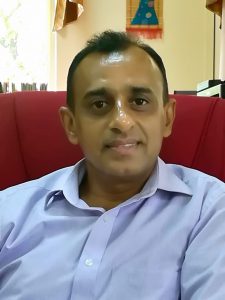 The arrowheads found were made mainly of animal bones, and to support the identification and authentication of these bones, Wedage sought the support of zoologist and University of Sri Jayewardenepura Department of Zoology Senior Prof. M.M. Pathmalal.

Prof. Pathmalal’s contribution in identifying the bones indicated that many of the arrowheads discovered were carved from animal bones; mainly monkey bones. This supports the theory that the early modern humans in the Fa-Hien Lena Cave had evolved not only with their weapons, but also in their manner of hunting, to hunt smaller, faster mammals, while developing bows and arrows to do so.

Other interesting discoveries in the Fa-Hien Lena Cave were those of ornamental marine animal shells and shark teeth that would have been used as accessories hung at the neck and the waist. Another discovery in the cave is that of ochre beads and other pigments. This is the earliest discovery of ochre beads and pigment-related material, with similar discoveries being dated at 20,000 years ago.

Wedage and Prof. Pathmalal explained that these discoveries show that early humans were as social as they are today. The presence of marine shells and shark teeth show that connections were maintained with the coastal communities that the Fa-Hien Lena Cave would have broken away from. They heavily imply lasting trading and interaction between these communities, or at the very least that these objects were generational and passed down.

The discovery of the ochre beads, Wedage explained, shows that even as early as 50,000 years ago, ochre and pigments were used to decorate and colour the body, either as part of ritual or for cosmetic purposes.

Another interesting discovery was that of needle-like implements, which implies that the Fa-Hien Lena community knitted and made specific garments, most likely to protect themselves from the rainforest environment. While temperature and surviving winters and seasonal changes would have been a priority to drive clothes-making in communities in temperate countries, this wouldn’t have been a priority in tropical environments like Sri Lanka, particularly for coastal communities. In the rainforest though, humans would have needed to adapt to protect themselves from small insects and mosquitoes. The presence of objects like needles is evidence of this adaptation to clothe themselves and thrive in their new environment.

One of the many bone arrowheads found.

Although excavations were completed in 2012, these arrowheads, beads, and other implements are only some of the objects discovered in the Fa-Hien Lena Cave. The findings recently published have been painstakingly analysed and authenticated by all the teams collaborating on the project, paying strict attention to protocols and procedures to ensure none of the findings or artefacts are compromised.

The fact that the Fa-Hien Lena Cave still has more insight to offer on early humans and how they lived is heartening.

Wedage and Prof. Pathmalal commented that the project would never have been able to be successful without the invaluable support of Sri Lanka’s Department of Archaeology and its Director General Prof. Senarath Dissanayake and the inspiring vision of former University of Sri Jayewardenepura Vice Chancellor Senior Prof. Sampath Amaratunge to upgrade the University of Sri Jayewardenepura into a research university and foster a collaborative research environment. Wedage and Prof. Pathmalal also extended their thanks to their collaborative international partners, the Max Planck Institute for the Science of Human History in Germany and the Griffith University in Australia for coming together and supporting the project across all fronts.

VIDEO STORY: Otara launches ‘Who We Are’

December 23, 2020 byNethmi Liyanapathirana No Comments
Otara Gunewardene, one of Sri Lanka’s most recognised entrepreneurs, recently launched a new online platform “Who We Are”. The platform is all about making a difference, to the people, the animals..

October 11, 2021 byNews Admin No Comments
With the ever-changing world it is evident that students need to be equipped with skills which assist them to face the challenges in life. The 21st Century demands knowledge beyond the subject matter,