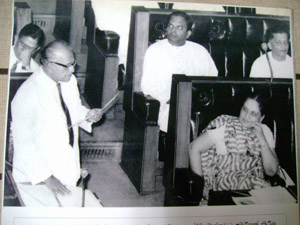 Dr. Nanayakkarapathirage Martin Perera, popularly known as Dr. N.M. Perera, one of the greatest politicians and statesmen produced by our country, was born on 6 June 1905. In recognition of his stature as a freedom fighter, a trade union leader, an authority who consolidated parliamentary democracy in the country, an economist who defended the rights of the developing world, and a politician who sacrificed political power to defend minority rights, he remains in the hearts of the people 43 years after his death.

Each year on 6 June, it has become customary to celebrate his birth anniversary by paying a floral tribute to his statue in Colombo. Leaders of the Left and many other political parties participate, together with some leading supporters of the Lanka Sama Samaja Party (LSSP), which he helped form in 1935 with socialist objectives. Among the chief speakers would be the current Leader of the LSSP and Chairman of the Dr. N.M. Perera Centre, or a representative of the latter. Similar functions in turn would be held biannually at the statues in Thun Korale, Ruwanwella, and Yatiyantota.

As usual, on 6 June 2021, the function was held, but with only three persons, as a token event to conform with the health regulations required to control the Covid-19 pandemic. As the present General Secretary of the LSSP, I gave a short speech. The Chairman of the Dr. N.M. Perera Centre, who was unwell, was represented by Ranil Vitarana, and the LSSP rank and file was represented by Nuresh Rajapakse, a member of the politburo, whose ample size filled the space left by the absent LSSPers. We retired home to discuss how Dr. Perera might solve the present crisis if he was alive.

The crisis that Dr. Perera faced as the Minister of Finance in the Sri Lanka Freedom Party (SLFP)/LSSP/Communist Party (CP) Coalition Government in 1972 was far worse than what confronts us today. In 1972, there was the perennial crisis of overproduction that dogs the capitalist economic system. But in addition, the fossil fuel price went up seven times due to the getting together of oil-producing countries to form a cartel, the Organisation of the Petroleum Exporting Countries (OPEC). But the worst global drought in 30 years led to a severe food crisis, with thousands of deaths worldwide, so that due to the traditional import-dependent policies of the United National Party (UNP) governments, our people were in grave danger (e.g. the price of a tonne of imported sugar went up from $ 40 to $ 600).

Dr. Perera explained to the people the magnitude of the crisis and called upon the people to tighten belts, stop the import-based luxury lifestyle, and develop an import substitution national economy, producing our food and developing a value-added industry (his budget allocation for science and technology was increased four times). The bulk of the burden should not be passed on to the people but be borne by the government and the rich class. The direct personal tax on the rich was raised to a maximum of 75% (today it is only 14%). He managed to balance the budget and in one year in office, earn more than the loss. The strict import restrictions reduced the foreign trade deficit and helped to cut down on foreign borrowing. The foreign debt was reduced to the lowest in our history.

Today, the biggest problem is the high cost of living, mainly due to huge profits made by rapacious middlemen (big mill owners, local money lenders to farmers such as traders, etc.). To end this, Dr. Perera and the coalition government developed the producer co-operatives (such as farmers) and the consumer co-operatives as genuine peoples’ organisations. By direct dealings between the two, he wiped out the profiteering of the middlemen. The co-operatives were so successful that Dr. Perera brought down the price of essentials to affordable levels, and even gave a measure of rice free. The result was that no one died of starvation unlike in other parts of the world. Due to the opposition of the traders, outsourcing to them was not possible. The result was long queues at the co-operatives. This and the other shortcomings were exploited by the media controlled by the rich to lay the blame on the government. They hid the global nature of the problem but blamed the government.

Besides food shortages, a major problem was the shortage of medicine in government hospitals and the high cost of medicines in private pharmacies. Prof. Senaka Bibile, a member of the LSSP, came up with his Medicinal Drug Policy, which was accepted by the World Health Organisation (WHO), and Dr. Perera strongly supported it and it was thus implemented. The outcome was that medicines for practically every disease were available in all government hospitals, free of charge. The shortages were overcome, unlike the situation that prevails today. Foreign drug companies got their governments to intervene and promised a large sum of money to the government to overcome the crisis, provided that Dr. Perera and the LSSP were expelled.

The Finance Ministry portfolio was taken away, and he was given a minor post which he refused and the LSSP was forced out of the government. The CP left the next year and the SLFP suffered a major defeat in the 1977 general election. The UNP-led by J.R. Jayewardene came to power in 1977 and opened the door for the commencement of the process of change referred to as neoliberalism. This ideology led by the US reached its zenith throughout the capitalist world, most of all in America. But it was a failure. It was rejected by the Sri Lankan people at the last presidential and general elections.

The anti-UNP political parties helped form the Sri Lanka Podujana Peramuna (SLPP)-led government and are committed to doing everything possible to solve the economic, social, and health problems facing the country and the people. Like Dr. Perera, I and the LSSP are very happy that the neoliberal foreign market dependent policies have been rejected, and that the commitment is to establish an indigenous economy, where local agriculture and a value-added industry are to be developed.

A major problem is the Covid-19 epidemic. In view of my training in virology and experience here and abroad in association with the WHO, I could have made some contribution to overcome this problem. In addition, where local value-added industry is concerned, I have already made a significant contribution as the Minister of Science and Technology when current Prime Minister Mahinda Rajapaksa was the President. In the four years, I established 263 Vidatha Centres, one in each division, and helped 12,300 micro, small, and medium-scale entrepreneurs to develop islandwide (17 exporters, 64 suppliers to Cargills and other food chains, and 53 to hotels). To promote large-scale industry for the export market, I set up a high-tech centre near Colombo, the Sri Lanka Institute of Nanotechnology (SLINTEC), with an emphasis on nanotechnology. But it would appear that I am not fit to be a Minister – State, Deputy, or Cabinet. I wonder whether what happened to Dr. Perera and Prof. Bibile had any bearing on this.

But why was Prof. Sirimali Fernando, the senior professor in medical microbiology at the University of Sri Jayewardenepura, left out. For her postgraduate research in London, England, she not only worked in the field of virology, but also used the polymerase chain reaction (PCR) test. She could have seen that the PCR test (and the rapid antigen test) were properly standardised to give reliable results (control of the epidemic will be difficult with many false positives and negatives).

One can understand what a person of Dr. Perera’s stature felt when he was kicked out of the Finance Ministry, when what has happened to me is related. The only occasion that I could express my views was when the Health Advisory Committee of the Parliament met on one occasion, at very short notice, with Health Minister Pavithra Wanniarachchi as the Chair. I proposed that a national committee of party leaders in Parliament be set up to interact with the Minister to exchange views so that we all unite to fight this common enemy. Then truly national Covid-19 committees could co-operate down to the village level in the interest of all the people. The Minister turned this down and said this Health Committee will meet twice a month and that any party leader is free to come. Four months have gone and this committee has not met once since then.

Secondly, I proposed that as community spread had begun, a new community-based approach was necessary to control the spread and I gave an outline of the necessary measures. She rejected my assessment and approach, stating that it was still in the cluster stage. I said the cluster approach could continue where indicated, but that my proposal too should be implemented. She rejected this proposal. I might mention that the day Dr. Sudarshini Fernandopulle was appointed as the State Minister of Primary Healthcare, Epidemics, and Covid-19 Disease Control, she invited me to meet her and I had a fruitful discussion with her for more than an hour. I hope she will get the necessary support.

(The writer is a virologist, government parliamentarian, Chairman of the Committee on Public Accounts, and General Secretary of the Lanka Sama Samaja Party)

No move to purchase APCs: Army

March 28, 2021 byNews Admin No Comments
No request has been made by the Army to purchase BTR-82A eight-wheeled armoured personnel carriers (APCs) as has been reported in some media and the Defence Ministry (MoD) has not received a request t