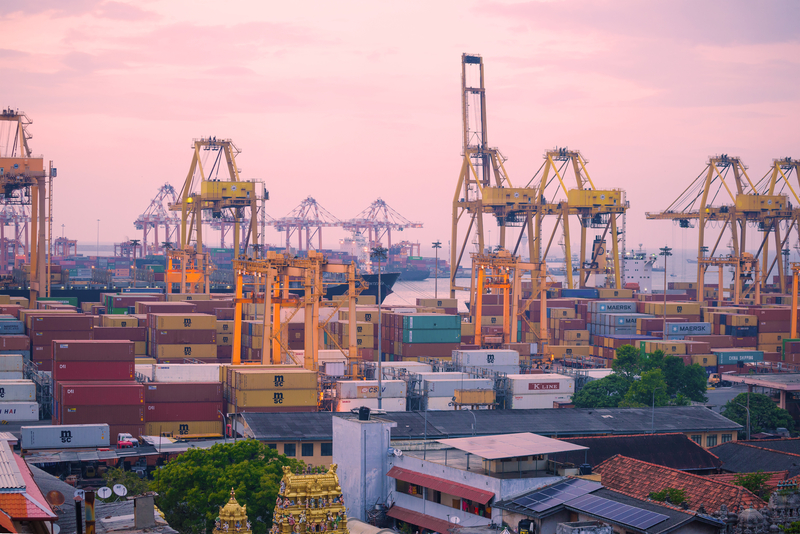 Amidst rising pressure from India to respect the tripartite agreement signed between Sri Lanka, India, and Japan for the development of the East Container Terminal (ECT) at the Colombo Port, the Sri Lankan Government is in the process of making a new proposal for the Cabinet-approved West Container Terminal (WCT) instead.

The new proposal is scheduled to be submitted to the Cabinet-Appointed Negotiating Committee (CANC) on Monday (22).

As learnt by The Sunday Morning, the new proposal, once evaluated by the committee, will be sent to India and Japan to appoint their representatives to continue the negotiations on the WCT development.

It is learnt that the committee had already started the initial discussions over the negotiations at a meeting held last week.

The ECT was agreed upon in 2019 through a memorandum of co-operation (MoC) between the three countries. Nevertheless, the Government was forced to amend the controversial ECT deal, mainly due to pressure from trade unions.

The MoC for the development of the ECT was signed between Sri Lanka, India, and Japan at the heads of government discussions held during the period from 2017 to 2019, and through Cabinet decisions taken on 30 May 2019.  It provides for the formation of a Terminal Operations Company (TOC), of which 49% is jointly held by Japanese and Indian shareholders, while 51% is held by the Sri Lanka Ports Authority (SLPA). Under the terms of the MoC, the TOC was to develop the ECT based on a Japanese loan to the SLPA, guaranteed by the Government of Japan.

The MoC was reached soon after China was given a controlling equity stake and a 99-year lease of the Hambantota Port, and concerns have been raised as to whether this deal is also a result of escalating geopolitical competition between regional powers.

As learnt by The Sunday Morning, neither India nor Japan have yet officially denied or accepted the Government’s proposal.

Nevertheless, Ministry of Ports and Shipping Secretary U.D.C. Jayalal said the committee had initiated the discussions with all parties concerned.

He told The Sunday Morning that the CANC that met last week had discussed the negotiating process.

Furthermore, the Secretary also stressed that the Ministry together with the SLPA has begun the initial process for the development of the ECT.

“We have started the procurement process and all other related processes for the development of the ECT,” Jayalal said.

All required committees have already been appointed in this regard and those committees are taking necessary steps to begin the terminal development, he added.

When asked whether the Ministry had already applied for a loan, the Secretary stressed that if a requirement arises, necessary steps would be taken to fill the financial gaps.

The handing over of the WCT for a joint development to India and Japan was agreed upon by the trade unions by a letter sent to the President. In the letter written to the President on 29 January, the unions had assured that they would withdraw from all union action if six conditions were met. These included the handing over of the already completed section of the ECT to the SLPA; completing the construction work of the terminal with SLPA funds; completing the construction within three years; and acquiring control of the South Asia Gateway Terminal (SAGT) after the already-existing agreement expired in 2029. If fulfilled, the unions agreed to support the Government for the development mechanisms of the WCT, to get Cabinet approval to take complete ownership of the ECT under the SLPA, and to get approval for both the WCT and ECT in the same Cabinet approval process.

The WCT is among one of the three terminals at the Colombo Port along with the South Container Terminal (SCT) and the ECT. Each terminal is 1,200 m in length and possesses facilities to accommodate three berths each.

The SCT commenced operations in 2013 under a public-private partnership (PPP) on a build-operate-transfer (BOT) basis with Colombo International Container Terminals (CICT) and the SLPA. CICT’s management is handled by China Merchants Holdings (International) Co. Ltd. The ECT, under the Colombo Port Expansion Project (CPEP) implemented by the Mahinda Rajapaksa Government, is the second-largest deep-water project of the Port. Of the planned 1,200 m terminal, 400 m was completed in 2015.

The Colombo Port currently consists of three main parts. One of them is the Jaya Container Terminal (JCT), belonging to the SLPA. The SAGT is owned by Sri Lanka and international entities, while a majority of the shareholding in CICT is owned by China. This terminal is located adjacent to the Colombo Port City. As a result, a terminal of sufficient capacity for the SLPA to dock large ships does not exist within the Colombo Port at present.

While local pressure groups keep silent on the WCT offer, it is still unclear whether India will agree to Sri Lanka’s unilateral decision.

In the meantime, even if the negotiations started within the country, the Government has not yet communicated even the Cabinet decision taken with regard to the MoC signed between the three countries to their foreign missions in Sri Lanka, who have expressed their displeasure over the Government of Sri Lanka’s decision and have had discussions with the Government pertaining to the matter, since.

Highly informed diplomatic sources told The Sunday Morning that the Government has not begun any sort of communications with regard to the said tripartite agreement.

“Once we finalise the new proposal, we will send it to the two countries and they will appoint representatives with whom the committee will continue negotiations,” Ratnayake, who is also a member of the CANC, told The Sunday Morning.

Explaining further on the development of the ECT, the Chairman stressed that the Authority had a development plan for the terminal and it will be implemented in the near future.

“We are taking the necessary steps and development work will commence soon,” he added.

October 26, 2020 byCharindra No Comments
Airport and Aviation Services (Sri Lanka) (Pvt.) Ltd. (AASL) stated that it has handled over 500,000 repatriated passengers from two of its airports during the period from March to October.

February 10, 2021 byNews Admin No Comments
In recent times, a proposal to cultivate and export cannabis appears to be gaining traction among certain government and business circles. This has led to increasing pressure from farmers in cannabis