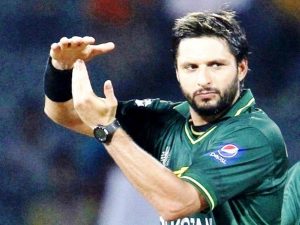 Sahibzada Mohammad Shahid Khan Afridi is widely considered one of the most popular cricketers of all time and was also a world record holder for the fastest ODI century, in 37 deliveries. The record stood for 17 years before being broken by Corey Anderson in 2014

Former Pakistan cricket Captain Shahid Afridi, who was renowned for his blitzkrieg of batting display during the heydays of his career, is the latest to speak on the unhealthy Indian dominance of world cricket today.

The star all-rounder revealed that the Pakistan Cricket Board (PCB) conducts several rounds of security checks before giving the green signal for any home series in recent times, particularly after Sri Lanka cricket team was attacked by a terrorist group in Lahore, on their way to a Test match at the Gaddafi Stadium, in 2009.

The last few days have not been pleasant for Pakistan cricket by any means. New Zealand and England were set to play white-ball series in the Asian nation. However, both teams cancelled their set of fixtures due to contrasting reasons.

NZC and ECB not appreciated

While New Zealand Cricket (NZC) abandoned their tour of Pakistan due to security concerns, England and Wales Cricket Board (ECB) cited “the mental and physical well-being of the players” behind their decision.

NZC and ECB’s approaches haven’t been appreciated by many and the two cricket boards have faced flak for the same, reiterated Cricktracker yesterday (27).

“We all know that there is a huge amount of scrutiny when it comes to arranging tours. Proper investigations are conducted by the security members of the touring nation,” Afridi had told Cricket Pakistan.

“The routes are defined and only when the process is completed, that the teams are given the green signal to visit the country,” the dasher, nicknamed ‘Boom, Boom’, has added.

“New Zealand cricketers are loved in Pakistan and for them to do something like this is unforgivable. If there was any potential threat, they should have been shared with the PCB and waited for Pakistan’s security forces to assess the situation,” he added.

It has to be noted that Pakistan’s information and broadcasting Minister Fawad Chaudhry claimed that New Zealand team had received a threatening e-mail that came from India.

“This e-mail was generated from India through a VPN showing the location of Singapore,” he told reporters.

Reacting to the claim, Afridi said other ‘educated nations’ should not follow India and take a stand as per their understanding.

“If you have to look at the bigger picture, then I think we need to take a decision which shows the world that we are also a country and we have our pride. It’s okay if one country is behind us but I don’t think other countries should also make the same mistake,” asserted Afridi.

“They are all educated nations and should not follow India. Instead, cricket should improve relations,” Afridi has opined.

“The situation was bad in India. We were getting threats. Our board asked us to go and we went there. Similarly, during Covid-19, the situation that there was in England, the cricket went on. If you trust false e-mails and cancel tours, then I believe you are offering them fodder to win,” he further added.

All Blacks make ring of changes

November 8, 2018 byRevatha No Comments
England set an improbable target of 462 runs in just over two days in the first Test