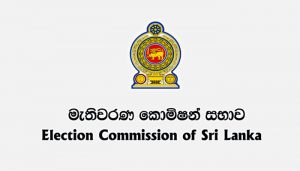 The Election Commission(EC) has received 673 complaints pertaining to the forthcoming presidential polls.

The complaints have been received during the period between 8-15 October.

The polls body noted that among the complaints were 650 instances of law violations, 06 violence-related incidents, and 17 other offences.

The polls body said, yesterday it had received 85 complaints alone, all regarding election law violations.

Meanwhile, PAFFREL has received 62 complaints since the announcement of the election on 18 September up until 14 October.

The highest number of complaints is on misuse of state power & resources which counts to 26 complaints. ‘New appointments’ take precedence from these complaints, PAFFREL said.

June 6, 2021 byNews Admin No Comments
The National Advisory Committee on Communicable Diseases (NACCD) is yet to take a decision on the possibility of administering the first dose of Sputnik V vaccine as a second jab for those who receive