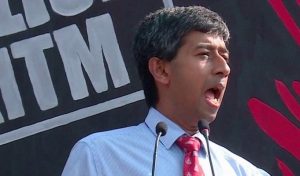 The Election Commission (EC) is to conduct an investigation into state employees who have been found to be violating election laws.

Local election monitors had complained that at least two state employees who were well known public figures had been seen at political events, and among them was the President of the Government Medical Officers’ Association (GMOA) Dr. Anuruddha Padeniya.

He said no government officer could directly or indirectly participate in promoting any political party or presidential candidate while holding the post of a government servant.

At the launch of Rajapaksa’s manifesto, former President Mahinda Rajapaksa and Padeniya were seen seated next to each other.

The EC issued a circular on 10 September, declaring that government officials, administrative officials, including medical officers without political rights should not participate in any political activity related to the election.

Being a union leader doesn’t make him eligible to support a political campaign, Ratnayake said, adding that union leaders could only represent issues faced by the respective employees.

Explaining the process of handling election violation complaints, Ratnayake said the Commission had already issued the relevant circulars and it had established separate units for Election Dispute Resolution (ERD) in all 25 districts.

“The Commission has no power to take legal action against those complaints but it will give evidence if a third party filed an action against the respective official or the person,” he said.

“A separate unit has been set up in each district. The complaints received by the Commission will be forwarded to the district office and separate investigations are being carried out by the representatives of the EC in that particular district. We also individually contact the officials and inform them not to do those things. The secretaries should understand that by doing illegal things while they are in power would have negative consequences later. The officials should know what they should do; then the choices of the politician are not relevant. Finally, the government official should have to take the responsibility,” he added.

2,000 three-wheelers to be purchased for Sri Lanka Police

February 23, 2021 byMihi Perera No Comments
The Cabinet of Ministers has approved a proposal to purchase 2,000 three-wheelers for the Sri Lanka Police Service, the government said.