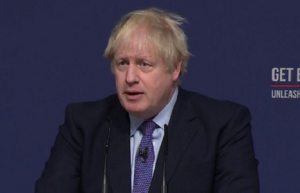 The Conservatives have won an overall majority in the general election, passing the 326-seat threshold with constituencies still to declare.

The BBC forecasts that Boris Johnson will return to Downing Street with a majority of 74.

The prime minister said it would give him a mandate to “get Brexit done” and take the UK out of the EU next month.

Jeremy Corbyn said Labour had a “very disappointing night” and he would not fight a future election.

Labour have lost seats across the North, Midlands and Wales in places which backed Brexit in 2016.

Speaking after he was re-elected in Uxbridge, west London, with a slightly higher majority, Prime Minister Boris Johnson said: “It does look as though this One Nation Conservative government has been given a powerful new mandate to get Brexit done.”

Speaking at his election count in Islington North, where he was re-elected with a reduced majority, Mr Corbyn said Labour had put forward a “manifesto of hope” but “Brexit has so polarised debate it has overridden so much of normal political debate”. BBC

January 8, 2020 byTSM Web Desk No Comments
A Ukrainian Boeing-737 with 180 people onboard has crashed in Iran, according to local media.