October 21, 2019 by The Sunday Morning No Comments

On 10 October, Meenagaya, the Colombo-bound night train from Batticaloa to Colombo, hit a wild elephant between Welikanda and Manampitiya. The incident took place soon after 1 a.m.

I was at the Polonnaruwa Railway Station by 3 a.m. and witnessed the commotion that arose. The railway staff were on their feet attending to the emergency, but their main concern seemed to be the need to load the next train. I tried hard to listen to any concerns the station staff expressed about the elephant, but unfortunately didn’t hear even one.

Trains travel through elephant-occupied lands from Gal Oya to Habarana. In fact, we trespass. Why I say trespass is because we never got permission from the owners of the land – the wild animals.

In addition to trespassing, we commit murder and cause grievous pain, as seen in the situation that occurred on the 10th.

Will we be brought to justice? Probably not, because the gentle giants cannot talk and also because the intelligent humans who can, opt not to. The rightful owners of these lands suffer in silence, as they have for a long time. The day humans became “civilised” was the day the rights of the innocent animals were infringed. 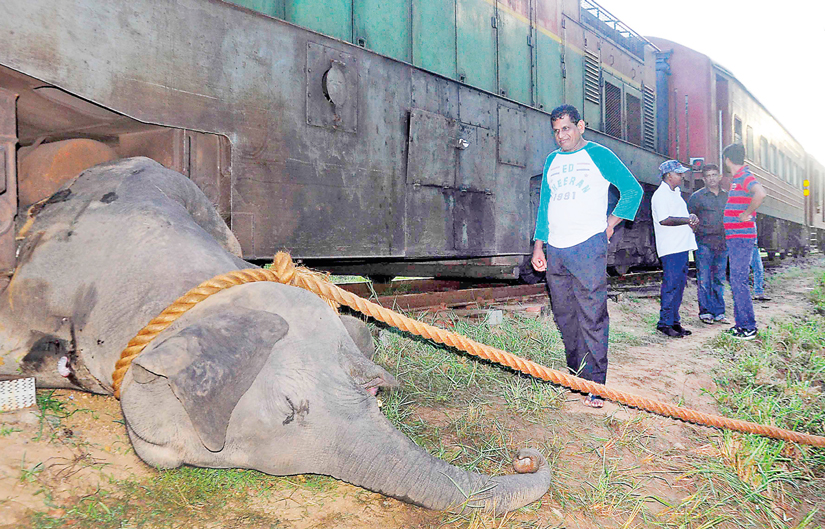 It is not only the elephants that face such atrocities, but it is only the elephant that is large enough to be seen. Let’s not forget about the leopard, sambar deer, and wild boar, which may also be facing the same fate in sporadic numbers, but are hidden behind curtains.

October seems a bad month for the jumbos.

Exactly a year ago, in October again, the same train – Meenagaya – hit an innocent elephant. The incident took place in Palugaswewa. In the same month, some days prior, the Colombo-Kankasanthurai train killed two more elephants.

Records of elephant deaths by train collision go back decades, and include the unfortunate accident at Kithulothuwa in the Kantale-Trinco railroad that caused the death of two mother jumbos, killing one calf and injuring another.

According to former Department of Wildlife Conservation (DWC) Director General Dr. Sumith Pilapitiya, it is during the Dry Season from May to September and the Northeast Monsoon from November to January that the giants move between habitats in search of food.

The monsoon came early during the past couple of years, which can be attributed to climate change caused by global warming. Hence, the high-risk season intermittently stretches from May to January now. This means it is at this time that reckless human intervention needs to be monitored the most.

Centre for Conservation and Research (CCR) Chairman Dr. Prithiviraj Fernando stated that it is the female elephants that are among the majority of the affected. “Males leave the herd when they are around 10 years of age. It is the females who nurture the young calves. This is among the many reasons that make female deaths a critical factor for elephant lineage,” he said.

University of Colombo Faculty of Science Senior Prof. Devaka Weerakoon voiced a balanced view on the subject. He was concerned of the risk to human life as much as to elephants and other animals.

“So far, no human deaths have occurred due to the elephant-railway conflict. But that does not mean it may not occur in the future. The risk to the passenger should not be discounted. We have a duty to protect both humans and animals. Hence, all measures need to be taken to minimise the risk of rail accidents.”

(EFL) board member Rukshan Jayawardene was concerned as to why an accountability issue does not arise from such accidents. “One may talk about this event, and then it is forgotten till the next disaster takes place.”

He emphasised that elephants are public property of the State and that the relevant authorities are duty-bound to protect the property of the public as well as to enforce the Fauna and Flora Protection Ordinance.

Jayawardene further stated that 125 years ago, it was the WNPS that requested the British Government to establish the Forest Department, which, with time, evolved to be the DWC.

“WNPS has continued to strive towards those efforts by means of the WNPS Subcommittee on the Human-Elephant Conflict, meeting executives of the relevant authorities, and calling for action, but all pleas have fallen upon deaf ears,” said Jayawardene.

According to Centre for Eco-Cultural Studies Director Sujeewa Jayasinghe, the following statistics have been collected by elephant researchers:

Sri Lanka, if sensitive to the cost factor, could run a pilot project in the high-risk area, for a start. According to Prof.

Weerakoon and Dr. Fernando, it could be as simple as reducing the speed of the trains at the identified crossing paths in the high-risk areas.

No. of crossing paths 83

Some suggested high-tech solutions to curtailing the problem are:

Veterans in the field such as Dr. Prithiviraj Fernando, Prof. Devaka Weerakoon, and Dr. Sumith Pilapitiya all unanimously agree that the most cost-effective as well as practically feasible solution is for the trains to lower speed, at least at the high-risk hotspots.

We waste so much time and so much energy on trying to come up with advanced solutions to the elephant-railway conflict, but the answer is so simple and so easy.

Take action to push the Department of Railways to take this simple step. As a citizen of this country, the government authorities are your representatives and it is your duty to make sure that they take the necessary and correct action.

Because if they do not, as news of the next elephant death on the railway tracks is reported, you may find it difficult to look in the mirror.

June 7, 2020 byJennifer Anandanayagam No Comments
A tooth enamel protein has been discovered in eyes with dry age-related macular degeneration. This finding may lead to a novel therapeutic target for blinding disease.

A glorious hope for a more mindful future

August 30, 2021 byNews Admin No Comments
Music is one of the most impactful mediums known to man. It has the power to evoke any emotion, and in the right hands can be an immensely powerful tool.