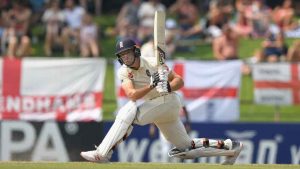 Jos Buttler sweeps through the leg side

Half-centuries from Jos Buttler and Sam Curran swept England towards a competitive total on the first day of the second Test in Pallekele.

On a dry pitch offering generous first-day assistance to spin bowlers, Buttler made a sparkling 63 from just 67 balls to ensure his side did not completely squander first use of a surface that may well deteriorate. Not many people expect to be here on Sunday.

Quickly abandoning conventional methods to combat spin – he only just recovered his ground to avoid being stumped before he had scored after skipping down the pitch early in his innings – Buttler swept (both orthodox, lap and reverse) 51 of the 63 runs he scored. Sometimes he swept as much as five times an over, sometimes he swept through extra-cover but, so well did he connect that, at one stage, Akila Dananjaya was swept for three fours in succession.

While the shot eventually brought his downfall, as he top-edged a reverse to backward point, his innings had helped revive England just as they appeared to be falling away. Rory Burns, who batted nicely in making 43, was the only other man in the top seven to reach 20.

Curran’s contribution was every bit as impressive. England were 225 for 9 when James Anderson joined Curran but, so well did he strike the ball and farm the strike that the final pair added 60 in 11 overs in a stand that seemed to dishearten an increasingly ramshackle Sri Lanka.

Curran thrashed six sixes – he has now brought up all three of his Test fifties with a six, and hit more sixes than anyone else in Test cricket this year – while Anderson contributed just seven runs in the partnership. Five of those sixes were off the unfortunate Dananjaya – twice he was driven over long-off, once over long-on, once he was pulled and once, impossibly, he was swatted over extra-cover when the bowler delivered a wide one in an attempt to thwart him – while Dilruwan Perera was also lofted over mid-off to help England to a total that may well prove above par.

For all the talk of spin, it remains seam – or at least pace – that appears Keaton Jennings’ weakness. Here he fell jabbing at one he could have left from Suranga Lakmal.

Despite a couple of early scares – offspinner Dilruwan took the new ball and twice spun deliveries past his outside edge in the second over of the innings – Burns was the most comfortable of England’s top-order batsmen. Three times he swept Dilruwan to the boundary; on another occasion he cut him there. He also picked up an early boundary off his legs off Lakmal. It was some surprise when he was drawn forward and edged to slip by a fine delivery in Dananjaya’s first over.

While Burns might be forgiven for wondering how he could play such a delivery, Joe Root might be forgiving for wondering how he missed the one that bowled him. Lunging forward to the left-arm spin of Malinda Pushpakumara, Root left a gate so large you could reverse park a caravan in it and simply missed a straight one. It was the third time in the series he has been dismissed by left-arm spinners.

Ben Stokes started his first innings at No. 3 in typically positive style. He was down the pitch to his first delivery, bowled by Lakmal, and flicked his third through square-leg for four. But while there was another flowing drive to the boundary off the seamer, life against spin proved harder. He survived a reviewed appeal for lbw on 10 – DRS showed umpire’s call – but fell in almost identical fashion shortly afterwards, back when he should have been forward and struck on the back pad by one that turned and beat his outside edge.

While the pitch offered turn, it was no minefield and England may yet come to rue two or three soft dismissals. Certainly Moeen Ali, who simply missed a short ball he had tried to turn into the leg side – Sri Lanka successfully calling for a review – may feel he missed out, while replays suggested that, had Ben Foakes reviewed his dismissal, he would have won a reprieve after being adjudged to have edged to slip. Replays suggested the ball brushed both his front and back leg but at no stage touched his bat.

After tea, Adil Rashid’s breezy innings was ended when he was lbw playing back when he should have been forward, while Jack Leach was bowled by a beauty that turned sharply to clip the top of his off stump.

It could have been worse for England. Curran survived a couple of nervous moments early in his innings. On 1, Niroshan Dickwella whipped off the bails just before Curran overbalanced and fell out of his ground and then, on 7, he edged the deserving Dananjaya through the left hand of a diving slip fielder.

Curran was dropped, too, on 53 when Pushpakumara, who seemed to be back on his heels on the long-on fence, put down a relatively straightforward chance. It summed up the latter stages of the performance in the field by a somewhat demoralised Sri Lanka side.