“England have no chance” – Vaughan 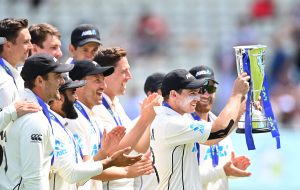 New Zealand won a Test series in England after 1999

England have “no chance” of regaining the Ashes in Australia if their batting continues to be “fragile”, says former Captain Michael Vaughan.

Joe Root’s side suffered a series defeat by New Zealand after they were bundled out for 122 yesterday (13) morning at Edgbaston offering New Zealand a chance to win the match and the two-match series.

England will play five Tests against India before their winter tour of Australia.

“They now have just five chances to sort the batting out before the Ashes,” Vaughan had remarked. “They can’t arrive in Australia with a batting line-up this fragile.

They’d have no chance.”

DANANJAYA BANNED FOR ONE YEAR

September 19, 2019 byRevatha No Comments
SL spinner banned by ICC for one year due to unlawful bowling action

May 2, 2021 byRevatha No Comments
All-island Inter-school Under-19 Div. I Tier A cricket