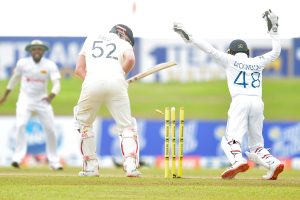 England faltered in the chase of 74, losing their top three with only 14 runs on the board, after bowling out Sri Lanka for 359 on day four of their first Test in Galle. With a target of less than 100 to scale, England were expected to sail through but a sudden flurry of wickets at the start kept the lid on the visitors’ scoring rate.

Lasith Embuldeniya drew first blood for Sri Lanka in the first over of England’s innings, knocking over Dom Sibley’s stumps. The Lankan spinners troubled the England batsmen with their sharp turns and Embuldeniya was rewarded with another wicket when he dismissed Zak Crawley (8) in the fifth over, making him edge to Kusal Mendis at gully.

With both openers back in the hut, England needed to play cautiously but a poor decision from Jonny Bairstow and Joe Root pegged them back further. The duo went for a tight single and Niroshan Dickwella raced towards short cover and aimed at the stumps to catch Root well short of the crease at the striker’s end.

With the light fading, Bairstow and Dan Lawrence managed to stabilise the innings before the umpires called stumps, taking England to 38/3, requiring 36 more.

August 13, 2018 byMalik No Comments
England cricketer Ben Stokes lied when he said he acted in self-defence during a fight outside a Bristol nightclub, a court has heard.