(1st day washed off, each side played 50 overs)

Johnny Nash probably wasn’t thinking about England’s selection for the Galle Test when he sang ‘There are more questions than answers’ but, as the selectors sit down to pick their side in the coming days, it would make a suitable soundtrack. 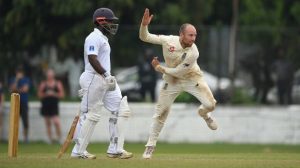 With the warm-up games now over, England’s plans are far from clear. They have choices to make on the identity of their keeper, whether to play two spinners or three, who should bat at No. 3 and which seamer – or seamers – should play alongside James Anderson and Ben Stokes.

But Denly has struggled in these red-ball warm-up games. After an unconvincing 25 in the first warm-up game, he was out second ball here pushing half-forward to a full, straight delivery.

The hope that his legspin might be useful at this level have been diminished, too. While his bowling may have a role to play in T20 cricket, here the batsmen were able to sit in and wait for the bad ball. They didn’t have to wait long, either, as he conceded three sixes and two fours in five overs that cost 43 runs. A relatively simple dropped chance in the first warm-up game didn’t do him any good, either.

As a result, his chances of making a Test debut in Galle have diminished. And, because of that, he could well have opened the door to a debut for Ben Foakes instead.

It’s not a like-for-like change by any means. But with Jonny Bairstow most unlikely to be considered for Galle – he didn’t take any part in this match and England do not want to jeopardise his availability for the second Test – they must pick from either Foakes or Jos Buttler.

It’s no secret that Trevor Bayliss is a fan of Foakes – or that Foakes is the superior keeper – and would like to find a way to slip him into the side. And, on a surface that is expected to spin, his excellence in standing up to the stumps could be crucial. Buttler will certainly play, but he could do so as a specialist batsman and allow Foakes to slot in at No.7. It may be relevant that England said before play they expected Buttler to keep throughout the innings but that after 25 overs, Foakes took over.

It does look, however, as if the batting will be opened by Keaton Jennings and Rory Burns. While Burns fell early here – he was beaten by the lack of pace in this sluggish surface and pulled to midwicket – he was impressive in the first game, while Jennings looked more solid this time. While he seems over-reliant upon the sweep and reverse-sweep to combat spinners, England are not flush with other options and his 45 in 33 overs here – he retired to provide others with opportunities – settled the debate for now.

Other performances provoked equally tricky dilemmas. Sam Curran, skipping down the wicket to the spinners, batted beautifully and claimed an early wicket when Stokes and Root combined to pull off an outstanding slip catch. But unless his control is immaculate and he can find some swing, he looks worryingly innocuous. At one stage here he conceded 28 – two sixes and four fours – in eight deliveries. Given the prospect of playing him as one of a three-man seam attack, that is a concern.

Stuart Broad, by comparison, offered control and could yet prompt a rethink of his absence for this game. But he cannot offer what Curran can with the bat, which perhaps leaves Chris Woakes as a compromise candidate. Despite the slow surface, Olly Stone made a couple of batsmen look uncomfortable, too. It’s hard to see a way in for him, but he does offer a point of difference.

Jack Leach, at least, enjoyed a fine day. If the highlight was the wicket of the left-hander Kamindu Mendis, bowled by a beauty that deceived him in the flight, then turned and hit the top of middle, there were several other pleasing moments. He conceded only one boundary – and that came in a nervous first over – and made a compelling argument for his Test selection.

Earlier Stokes batted nicely after England had collapsed from 28 without loss to 28 for 3 in ten deliveries. Ollie Pope, pushing at one on off stump, was unable to press his claims for a place and Buttler fell to a forcing shot off the legspin of Jeffrey Vandersay. At one stage, England’s massage therapist had to sprint to the nets on the ground over the road – where England’s middle-order were training – to get them to pad-up. But Stokes, who looks a fine player of spin these days, waltzed to fifty before retiring.

For the Sri Lanka side, Avishka Fernando (who took Curran for successive sixes) looked a fine player, while Shehan Madushanka swung merrily and took a shine to Denly, in particular. Lahiru Kumara again looked a fine seamer, too, and took three wickets – all of them top-order batsmen – in five balls at one stage.

At no stage was this treated as a serious game. Batsmen and bowlers came and went throughout and there was never any intention of either side defending or chasing a total. It was all about warm-up and preparation. But while England suddenly grew warm, they still have a lot of thinking to do before settling on their side for the first Test.

Meanwhile it is understood that the number of tickets bought by England supporters for this series has dropped sharply since the the last series here between these teams in 2012. Perhaps due to the scheduling – the entire tour is being played during monsoon season – and perhaps due to a perception (it may well be more than a perception) that England supporters are being charged far than home supporters, it is understood that around 2,500 Test tickets have been sold to overseas visitors. That number was at least 2,000 higher in 2012. Talk of the possibility of a tropical cyclone developing in the coming days will encourage few last-minute arrivals.

August 23, 2021 byRevatha No Comments
First edition to The Hundred is over, Braves and Invincibles make a mark