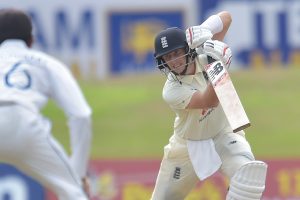 Joe Root during his marathon knock of 168 n.o.

England were 320/4 at the end of the second day’s play of the first cricket Test, on the back of a resilient century (168 n.o.) by their skipper Joe Root, at the Galle International Stadium on Friday (15). England resumed their innings from 127/2.

Now Sri Lanka are 185 runs behind England’s total in the first innings. It was Root’s 18th Test hundred.

Root put on a 173-run stand with debutant Dan Lawrence (73) for the fourth wicket. That was after sharing 114 runs for the third wicket with Jonny Bairstow who made 47.

Sri Lanka were bowled out for 135 runs, their lowest first-innings total in this venue, on the first day of the Test on Thursday.

July 8, 2020 byTSM Web Desk No Comments
Nearly four months after the world of cricket came to a halt due to the ongoing Covid-19 pandemic, cricket is set to finally make a return as England take on West Indies in the first Test in Southampt