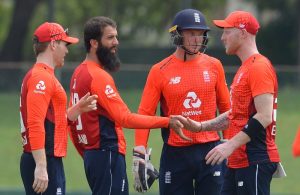 Joe Root and Eoin Morgan struck confident, unbeaten nineties in England’s first match of the Sri Lanka tour, after Moeen Ali, Mark Wood and Ben Stokes had shared seven wickets between them against a strong Sri Lanka Board XI side.

Their collective efforts enabled England to cruise to a 43-run Duckworth-Lewis victory, after rain then bad light prevented the game from reaching its natural conclusion. In pursuit of a target of 288, England finished up on 215 for 2 after 35.3,

Sri Lanka’s new ODI captain Dinesh Chandimal also made use of the occasion, spending 85 deliveries in the middle and hitting 77 runs in the process. Twenty-year-old Kamindu Mendis was the other half-centurion for the Board XI making 61 off 72. He also dusted off his ambidextrous finger-spin later in the day, bowling offbreaks to the left-handed Morgan, and left-arm orthodox to the right-handed Root, as those two batsmen went about their unbroken 174-run stand.

The Board XI had made a bright start to the day when Lahiru Thirimanne and Test opener Dimuth Karunaratne produced a fifty-run stand. But Moeen then claimed England’s first spoils, wriggling two deliveries between the defences of both batsmen in the space of three deliveries.

Kusal Mendis – recently dropped from the ODI side – could manage only 22 before he became Moeen’s third victim, leaving Chandimal to rebuild the innings from 107 for 3. He forged a 56-run stand with Kamindu for the fifth wicket, before he was dismissed by Root. That the Board XI got anywhere near 300 was thanks also to the enterprise of No. 8 batsman Isuru Udana, who hit three sixes and three fours in his 26-ball 40.

England lost Jonny Bairstow to the bowling of Udana in the fourth over, and Jason Roy to Kasun Rajitha in the ninth, but Root and Morgan quickly took control of the situation, and the visitors practically cruised from there on out. Morgan, predictably, was the more eager of the pair to venture big strokes, hitting three sixes and nine fours in his 91 not out off 84 balls. Root was 90 off 92 with eight fours to his name, when the covers came on for the final time

England play their second warm-up one-dayer in as many days on Saturday, also at the P Sara Oval.

National Super League selections made NOT by national selectors!

March 28, 2022 byNews Admin No Comments
The whole purpose of the glamorous idea of the National Super League (NSL) is lost, one can argue. The five teams of what is projected as the prime first-class cricket tournament of the country, which