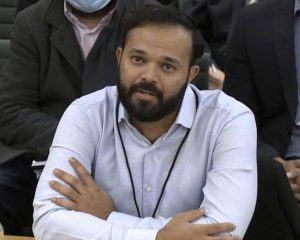 Azeem Rafiq told a Digital, Culture, Media and Sport select committee of the British parliament yesterday (16) that the issues he faced at Yorkshire are “without a shadow of a doubt” widespread in England’s domestic cricket

Azeem Rafiq, 30, told a Digital, Culture, Media and Sport select committee of the British parliament yesterday (16) that racist language was “constantly” used during his time at Yorkshire.

In an emotional testimony, he also said the club gave him “inhuman” treatment after his son was still-born in 2017. He added the issues he faced at Yorkshire are “without a shadow of a doubt” widespread in domestic cricket, reported BBC.

Rafiq said he had lost his career to racism, which is a “horrible feeling” but that “hopefully” by speaking out there will be “massive change in five years’ time”.

“All I wanted was an acceptance, an apology, an understanding, and let’s try and work together to ensure it never happens again,” he continued.

“I was not going to let this go, no matter how much damage it causes me – I was determined to become a voice for the voiceless.”

# Racist language, including terms aimed at his and others’ Pakistani heritage, was used “constantly” and “never stamped out” during his time at Yorkshire

# It left him feeling “isolated” and “humiliated”, with racist comments made by others in front of team-mates and coaching staff but not challenged

# He “didn’t realise” and was “in denial” about the scale of the problem during most of his first spell at Yorkshire, up until 2014

# Aged 15 and a practising Muslim, he was pinned down by a senior player at his local cricket club and red wine was poured into his mouth

# He said he “wasn’t perfect” and was “not proud” of some of the things he did and said while drinking, but these have “no relation” to the racism he was subjected to

Hutton, who offered his “profound apologies” to Rafiq, said Yorkshire’s Director of Cricket Martyn Moxon and former Chief Executive Mark Arthur “failed to accept the gravity of the situation”.

November 8, 2021 byRevatha No Comments
They are now under a new committee