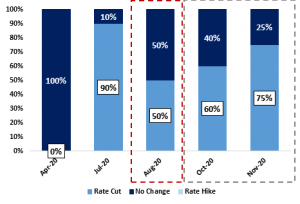 Rate revision trends of the Central Bank of Sri Lanka

With the Central Bank of Sri Lanka set to announce its latest monetary policy stance today (20), First Capital Research believes there is a greater likelihood of a further relaxation considering the current economic conditions.

In line with the expectations of First Capital Research (as mentioned in the pre-policy report dated 29 June) the Central Bank reduced the SDFR (Standard Deposit Facility Rate) and the SLFR (Standard Lending Facility Rate) by 100 bps to 4.50% and 5.50%, respectively, at its policy review held on 9 July 2020.

Sri Lanka’s economy contracted by 1.6% in Q1 2020, as against a 3.7% growth in Q1 2019, prompting flag off concern, as the negative growth was ahead of the Covid-19 impact. First Capital expects the impact of Covid-19 disruptions will be felt much more in the Q2 2020, as it continued to spread throughout the country since mid-March 2020. Moreover, decline in global demand for the country’s exports and delays in raw material procurement, and the lack of tourist arrivals due to travel restrictions further heightens the risk of lackluster GDP growth concerns for 2020E.

Despite continuous reduction in market interest rates (by 198 bps from 9.38% on 6 March to 7.40% on 7 August), credit extended to the private sector contracted significantly in May 2020 (Rs. 70 billion) and June 2020 (Rs. 54 billion) due to the impact of Covid-19 while YTD (tear-to-date) credit growth remains muted at 0.62%. However, First Capital expects private credit to gradually pick up only towards Q4 2020 amidst the reluctance to lend due to sluggish economic conditions. Nevertheless, a further rate cut is likely to induce support for a quick recovery by accelerating credit which is believed to be the Government’s current need of the hour, it said.

Sri Lanka’s exchange rate and foreign reserves remained at a much more comfortable position by July 2020 in the range of $ 400 million currency swap and with the exchange controls including import restrictions. First Capital believes a comfortable external front reduces the detriment in providing further easing in policy rates.

Rise in yields in the secondary market pre-election

Despite the improved liquidity position, yields in the secondary market witnessed a slight increase with moderated activities as market participants followed a wait-and-see approach amidst the upcoming policy review. Weighted average yields at the weekly Treasury bill auction on 5 August were seen increasing, with the one-year maturity rising by 8 bps to 4.94%, for the first time in 21 weeks. First Capital believes a further policy cut would be required to sustain the yields at current levels in line with the low interest rate environment.

With the reduction of the SRR (Statutory Reserve Requirement) by 300 bps and further money printing by the Central Bank, the liquidity position reached Rs. 182 billion nearly one-and-a-half months high. However, despite the significant SRR cuts since the onset of Covid-19, credit growth has been deteriorating thus throwing doubt over the ability of further easing policy rates to stimulate the demand.

For the first time in history, the Central Bank reduced its policy rates in four consecutive instances providing a total of 200 bps rate cuts since March 2020. With the above initiatives, market interest rates have declined although it hasn’t reflected in private credit growth. There can be a possibility that this time the Central Bank prefers to conserve its policy space and use it judiciously in the latter part of the year, reflecting a lesser probability of further rate cuts at the upcoming review.

With the expected recovery in economic activities, First Capital believes that monetary policy easing can manifest in demand pull inflation. At current levels, inflation as measured by CCPI (Colombo Consumer Price Index) is at 4.2% in July 2020, well within the Central Bank’s targeted inflation framework. However, if private credit picks up at an accelerated level and if import restrictions are relaxed towards the later part of the year, that can create a situation of an overheated economy thus creating inflationary pressures.

Despite the lackluster economic growth conditions, most of the other countries hold their policy rates at the same levels.

Cruise ship ‘Navigator of the Seas’ calls at Hambantota Port

August 6, 2021 byNews Admin No Comments
The cruise ship “Navigator of the Seas”, under the agency of Prudential Shipping, called at the Hambantota International Port (HIP) for the purposes of receiving bunkers, marking another significant m