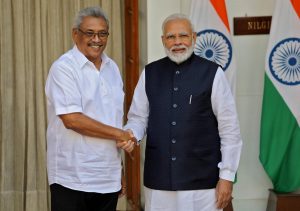 The Government last week held discussions on the Economic and Technology Co-operation Agreement (ETCA) for the first time in nearly a year, possibly signalling a resumption of bilateral negotiations on the controversial agreement with India.

The discussions took place last Tuesday (25) amongst officials of the Ministry of Foreign Relations, according to Ministry Secretary Admiral (Prof.) Jayanath Colombage.

Speaking to The Sunday Morning Business last week, both Minister of Foreign Relations Dinesh Gunawardena and State Minister of Regional Co-operation Tharaka Balasuriya confirmed that pending free trade agreements (FTAs) are being taken up at the moment, although they did not confirm any developments specifically with regard to the ETCA.

“Ad-hoc negotiations carried out before last year are being followed up methodically at the moment. We have taken up the pending matters which were initiated and not followed up by the last regime. We are taking it step by step,” Gunawardena stated.

State Minister Balasuriya told us that several signed and pending agreements are being reviewed.

“We are revisiting agreements. We are reviewing detrimental clauses to Sri Lanka because most of the agreements Sri Lanka entered into are more beneficial to the counterpart but not for us,” Balasuriya added.

The last and 11th round of negotiations between Sri Lanka and India were held in October 2018 prior to the constitutional crisis. It was also the last time internal discussions on the matter took place.

The negotiations have been on hold since October 2018 due to a number of unexpected developments in Sri Lanka such as the constitutional crisis in October 2018, the Easter Sunday attacks, and also due to the elections in November 2019 and August 2020. External factors such as the 2019 general elections in India, which was held over seven phases from 11 April to 23 May, also contributed to the delay.

Following the Sri Lankan presidential election in November 2019, well-placed sources told The Sunday Morning Business that the ETCA negotiations were unlikely to be restarted until the general election in August 2020, due to possible changes in management of relevant authorities after the election.

As predicted, no discussions pertaining to the agreement were held between the two parties during the interim period from the local presidential election to the general election.

The ETCA faced heavy opposition from professional bodies, particularly in the IT and healthcare sectors, over the past few years on the grounds that Sri Lanka’s skilled labour force would be relegated to a second choice with preference given to Indian workers.

Furthermore, in 2016, the Joint Opposition, which is currently the Government, vehemently opposed Sri Lanka’s move to enter into the ETCA with India as they believed it would lead to “foreignisation” of the Sri Lankan economy. However, several economists have pointed out its benefits, which include its potential to address Sri Lanka’s skills shortage.

May 2, 2022 byNews Admin No Comments
A high level delegation from Japan’s Ministry of Foreign Affairs (MOFA) visited the Hambantota International Port (HIP), to get first hand information on a wide range of subjects relating to port acti

UDA yet to find investors for Colombo Racecourse

September 12, 2021 byNews Admin No Comments
In anticipation of providing a lease of life to the Colombo Racecourse Mall, the Urban Development Authority (UDA) is continuously looking for investors by way of evaluating a couple of proposals they