EU EOM not prepared to be ignored…again

February 5, 2020 by Easwaran No Comments 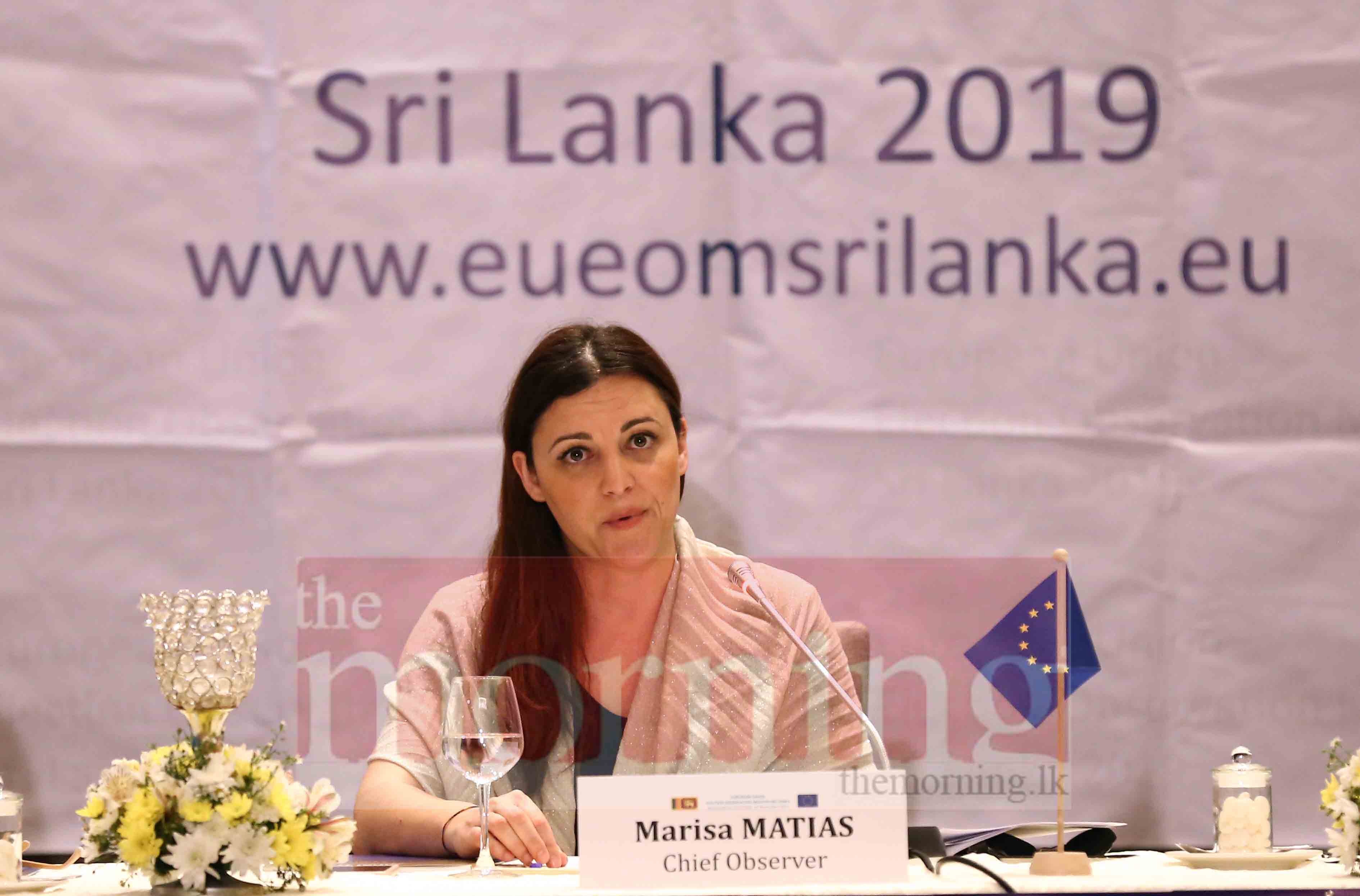 With Sri Lanka implementing only a few recommendations put forward by European Union (EU) election observers in the past, the EU are set to get tough this time around and will closely monitor the implementation of the latest set of recommendations and report to those concerned on the progress.

The EU Election Observer Mission (EU EOM) issued 23 recommendations based on its observations of the 16 November presidential election.

However, the EU EOM is aware that Sri Lanka implemented only three out of 26 recommendations made by EU election observers after the 2015 presidential election.

As a result, this time around, the Delegation of the EU in Colombo will be tasked with monitoring the implementation of the latest set of recommendations over a period of a few years, The Sunday Morning learnt.

“The EU delegation takes much of the responsibility from here on for the process of discussions leading to recommendations being implemented. It will initiate discussions with various actors such as Parliament, the Government, political parties, the Election Commission (EC), civil society organisations, as well as any relevant international actors, regional and sub-regional bodies with an interest in the implementation of a particular recommendation,” EU EOM Chief Observer Marisa Matias told The Sunday Morning.

She said that the EU EOM will continue to follow the process after its departure from Sri Lanka.

“Our methodology is to send a follow-up mission focused on the recommendations in mid-electoral cycle, so in some two to three years,” she said.

The EU EOM which left Sri Lanka last week had talks with various stakeholders on its final report with regards to the 16 November election and the 23 recommendations.

Meetings were held with the EC, civil society, media heads, and others.

In its final report, the EU EOM offered 23 recommendations to improve the framework for elections based on its observations, analysis, and extensive discussion with a range of national stakeholders.

Some of the key recommendations include calls to revise the law to ensure equal campaign opportunities by removing all disproportionate restrictions to campaigning on the ground, including on processions, on dissemination of political campaign messages, and on the establishment of campaign offices.

The EU observers have also called on the authorities to establish unified campaign silence rules for contestants in terms of traditional and online, as well as paid social media campaigning, with clear, enforceable sanctions for non-compliance.

“Legal restrictions are applied to the use of a wide variety of political advertising, including the holding of processions. Such restrictions undercut constitutional guarantees of freedom of speech, movement, and assembly and do not accord with Sri Lanka’s international commitments,” Marisa Matias said.

The observers have also called on Sri Lanka to adopt a law on campaign finance and campaign expenditure saying the law should include clear provisions on timely disclosure before and after elections, oversight, sanctions, and enforcement. Income and expenditure reports should be audited by a competent independent body with investigative powers.

“The financing of campaigning and of political parties remains unregulated. This deprived the election of an element of transparency and contributed to an uneven playing field. EU observers noted the high-visibility campaigns on the ground of the two most prominent candidates, underscoring a considerable gap in expenditure and resources between them and the other contestants. With no limits on campaign advertising, campaign coverage in traditional and online media was highly monetised,” she said.

Facebook played a key role at the last election with misinformation and disinformation taking centre stage during the campaign period.

The EU EOM has called for formal co-operation between the election administration and main social media platforms.

“The EC and Facebook should aim to develop more efficient mechanisms to enhance the transparency of campaigning on the platform and the respect for existing campaign rules (including, but not limited to, the electoral silence period),” the report on Sri Lanka stated.

The report said social media platforms, and in this case Facebook in particular, should grant equal treatment in terms of the assistance offered to election management bodies in all countries where they are avenues for political advertising and messaging.

The EU EOM also noted that Sri Lanka needed to adopt special measures as anticipated by the Constitution to remove barriers and promote equal participation of women in public and political life.

“We noted inadequacies in the legal framework for women’s political participation, with weak rules for their inclusion in political parties and unregulated campaign finance that could hamper their candidacies. However, we also note that recent progress has been made on inclusivity for women in local government,” Matias said.

She said that the recommendations put forward by the EU EOM in its final report are addressed to the relevant Sri Lankan institutions, such as the EC, the Government, Parliament, political parties, and civil society organisations.

“I would like to stress that the recommendations are the fruit of the lengthy consultations that we held with them all before the mission left Sri Lanka in December, after the presidential election,” Matias said.

The mission said it hopes to return to Sri Lanka for the parliamentary elections if an invitation is extended by Sri Lanka.

‘I survived the Taliban. I fear for my Afghan sisters’

August 19, 2021 byNews Admin No Comments
In the last two decades, millions of Afghan women and girls received an education. Now the future they were promised is dangerously close to slipping away. The Taliban – who, until losing power 20 yea

July 27, 2021 byNews Admin No Comments
In the context of the deepening global economic crisis, the country’s foreign exchange (forex) crisis is not improving. The slight increase in exports has been undermined by increased imports, especia