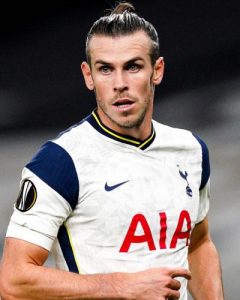 The Catalan giants are back in business in the transfer market. New president Joan Laporta is optimistic about keeping Lionel Messi. However, Barcelona requires fresh blood and adds more depth to their squad. According to many reports, Barcelona has its eyes on six key targets. Their main target is securing a new striker.

Erling Harland is at the top of their list with the Norwegian’s father Alf-Inge and agent Mino Raiola having visited the Catalan club. A cheaper option would be Sergio Aguero as a free agent with the Manchester City star reportedly eager to join Barcelona.

Barca boss Ronald Koeman is a big fan of former Manchester United star Memphis Depay, having worked with him as manager of the Dutch national team. With Depay’s contract, like Aguero’s, set to expire this summer, Barca could land themselves a bargain from Lyon.

Barca’s fourth striker option is long-term target Lautaro Martinez, who just got his hands on the Scudetto with Inter Milan.

Five men sent off at the Monaco and Lyon clan 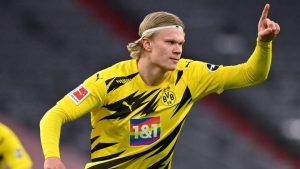 Lyon won a 3-2 thriller at Monaco in a game that saw FIVE players sent off. The defeat is a huge blow to third-place Monaco’s title aspirations as they now sit four points behind PSG in second. Lille is still at top of the table, but now Lyon is only one point behind Monaco in the race for Champions League qualification.

Monaco was on a five-game winning run and looked to be continuing that when Kevin Volland finished after a pass from Wissam Ben Yedder on 25 minutes. Depay leveled moments before the hour mark with a deflected strike.

Lyon midfielder Maxence Caqueret was sent off on 70 minutes and then Depay’s brilliant free-kick from the right was met by defender Marcelo’s head to give them the lead.

But a blunder from Lyon goalkeeper Anthony Lopes led to a penalty for Monaco, which France striker Ben Yedder scored to make it 2-2 with four minutes to go. Then it was Lyon’s 17-year-old starlet Rayan Cherki who came off the bench to finish superbly to seal the win in the 89th minute with his first touch.

That was when the trouble erupted at the final whistle. Lyon’s Mattia De Sciglio and Marcelo plus Monaco’s Pietro Pellegri and Willem Geubbels were all shown a red after the on-pitch brawl.

Another year at Spurs for Bale? 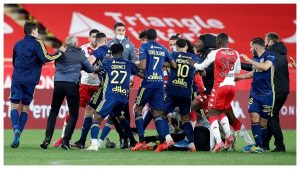 It was expected Gareth Bale would return to Real Madrid at the end of the campaign where his deal has one year left. But according to the Daily Mail, Spurs have the first refusal on agreeing on another loan switch this summer.

Spurs are paying around half of Bale’s salary this season. An extension on the same terms is understood to be on the table and would likely be financially better for Tottenham than looking to sign a suitable replacement in the transfer market.

Speaking in March Bale said: “There’s no distraction for me. I think the main reason I came to Spurs this year was to play football first and foremost. Going into the Euros I wanted to be match-fit. The original plan was to do a season at Spurs and after the Euros still have a year left at Real Madrid. My plan is to go back, that’s as far I have planned.”

In the two Premier League games under Mason, he has four goals including a hatrick on Sunday. That has taken his tally to 14 for the season in all competitions, behind only Harry Kane and Son Heung-min.

February 19, 2021 byRevatha No Comments
Speedster retires with SSC record and many sweaty memories