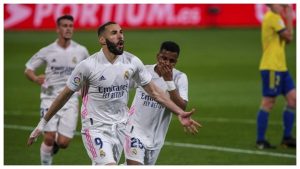 Caption: Kareem Benzema has been in fine form this season for Real Madrid

Compiled by Ranjika Perera
After a bizzare few days in football, we have got back into the league matches around the world. Bayern Munich extended their lead on top yet again with a win while RB Leipzig dropped points this week.
* Bundesliga: Bayern beat Leverkusen 2-0; Leipzig defeated by Koln
Bayern Munich’s 2-0 win meant they are now 10 points clear of second placed Leipzig. The two goals came from Choupo-Moting and Joshua Kimmich for Bayern as they registered their 22nd win in the league this year. Koln’s Jona Hector scored two goals as they stunned RB Leipzig with 2-1 win. Leipzig needed to keep winning to stay in the hunt with the defending champions, but with this defeat they are almost out of the title race.
Dortmund won their tie against Union Berlin by two goals to nil. Marco Reus and Raphael Gurreiro scored for Dortmund as they remain in the hunt to secure a spot in the top four. Eintracht Frankfurt remained at fourth place with another win against Augsburg. They have a four-point lead against Dortmund who are sitting at fifth place.
* La Liga: Real Madrid and Sevilla register wins
Real Madrid are making a case for their title defence as they continued their winning run with a 3-0 win over Cadiz. Karim Benzema scored twice and Alvaro Odriozola scored the other goal as the game was dominated by Real Madrid. This put them on level points with Atletico Madrid, who has a game in hand. Sevilla’s 1-0 win over Levante meant they leap to third spot with 67 points. However, Barcelona who is currently on fourth spot with 65 points, have two games in hand.

There will never be another Alastair Cook – Joe Root