Everyone should be disciplined, Namal remembers Parliament on “Vaas fiasco” 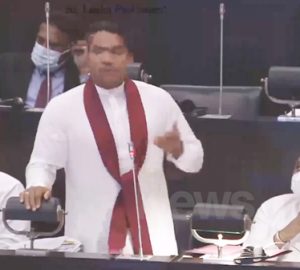 Sports Minister Namal Rajapaksa hints there should be discipline for everyone, even for great legends of the sport

As we got to know, the Sri Lanka Cricket (SLC) has recently increased the monthly salary of its COO by about ten lakhs. The CEO’s salary too has been increased by about five and half to six lakhs. But their minor staff is not apparently benefitted in the same way.

SLC on Monday (22) tarnished the image of Chaminda Vaas, a talented and popular player who had been contracted by SLC. They have issued a media release tarnishing his image. He has asked for an increment of $ 3,500 (about Rs. 675,000) for joining the West Indies tour.

Vaas is a player of Sri Lanka cricket which is brand that carried Sri Lanka to the world. Therefore such a player has not been treated properly when their officials get such massive increments.

I would like to know your (Youth and Sports Minister Namal Rajapaksa’s) idea as to why Vaas’ reputation was damaged in that manner.

Here is the full answer of Minister Rajapaksa to MP Amarasena’s queries:

There are no such increments amounting to ten to fifteen lakhs to the officials. You are talking about things that have happened during your Government (2015-19). Increments have been made on certain percentages of their salaries after having approval from the SLC executive committee.

I personally feel sorry about what happened to Mr. Vaas. I feel sorry that our national team lost such a good coach. But there is a way you need to talk about your contract and the salary with the cricket board. It is according those contracts that they are given payments when they are on tour.

Recently we appointed a Cricket Committee under Mr. Aravinda de Silva. It is that committee that takes decisions on cricket. After Mr. Vaas was appointed as a coach for the West Indies series, there should be a discussion with the cricket board on payments.

He has made a request for an increment at the very last moment. I don’t either criticise or justify that request. But the cricket board has agreed to pay him Rs. 750,000 with the ex-co approval, only for this series.

But I am personally not happy that he did that just four hours before the national team leaves for a series. In spite of the problems that you have with the board, it is the players who suffer in the end. It is a young side which has been earmarked for the 2023 World Cup.

I’m also sad because this happened when the Cricket Committee had been having discussions with Vaas to get his services for the national side in the long term.

Question: Vaas could have been given the amount given to former Bowling Coach David Sekar.

Minister Rajapaksa: Mr. Vass had been on a contract with the board even before he was appointed as the national team bowling coach (after Sekar left the job). According to the contract, there is no necessity to pay him extra. Secondly, there is a way to discuss about what is in relation to what the previous coach had received.

If you come three hours before a tour and say I won’t go if you pay me this amount, and other coaches also follow the same practice, how can we face such a situation. If players are going to do the same thing, how are we going to face it?

Therefore, there should be discipline in the coaches too, as it should be with the players and board officials. There was problem about the payment. Our Cricket Committee anyway had a plan to give Mr. Vaas a long-time contract. We would have negotiated on payments in a discussion.

SLC may have its shortcomings. But when you came at five and say I don’t go if I am not paid this much when the tour at eleven, the board can’t agree because that will set a bad precedence for both coaches and players. There should be a proper system.

I clearly say Honorary Speaker that the discipline of players, the board, the coaches, and the administrators have to be maintained going forward.

The Cricket Committee that we’ve appointed take impartial decisions only for the betterment of the sports.

Vaas is a player I too love and respect. But I am now worried not because either I or the ministry, or the board, has been disregarded in this manner by him but because those young players who are deprived of the opportunity to travel with one of their legends who brought a World Cup to our country.

Opposition MP H.M. Marikkar: It was not a matter related to his contract. What he had requested was a per diem of $ 200.

Minister Rajapaksa: It is not per diem. It’s a per day. It’s $ 200 per day. The problem is not about paying Mr. Vaas that. But the point here is the way that payment has to be made. The board can’t increase salaries according to anyone’s whims and fancies. There is a system for that and we clearly follow that method.

December 13, 2019 byTSM Web Desk No Comments
New Zealand fast bowler Lockie Ferguson has been ruled out of bowling for the rest of their Test against Australia after picking up an injury on day one in Perth.