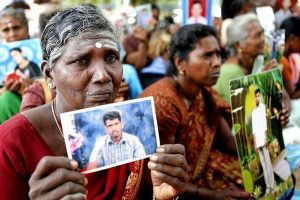 The high-profile case of the disappearance of 11 youth in which two former senior military personnel have been implicated has taken a new twist with a former high-ranking legal officer in the country now being implicated and the proceedings expected to take vital steps when it is called up on Wednesday (17).

“When the case is being called up on Wednesday, we expect that strong measures will be taken against a former Deputy Solicitor General (DSG).

“It will not only be for directly abetting the cover-up of evidence during the last four years, but as recently revealed to court, he is to have had full knowledge of the disappearance of the youths,” Attorney-at-Law for the aggrieved party, Achala Senevirathna told The Sunday Morning.

According to several statements given by former Sri Lanka Navy Commander Admiral Wasantha Karannagoda that were corroborated by the outcome of the investigations, it was revealed that this former DSG in question had full knowledge of the crimes.

It was recently revealed in court that Admiral Karannagoda had requested the officer (the former DSG), who was heading the legal division of the Sri Lanka Navy at the time, to take immediate action, but for reasons unknown to many, he had reportedly failed to do so.

Meanwhile, the Police Criminal Investigations Department (CID) has previously informed the Attorney General of the DSG’s actions of allegedly exerting duress on witnesses and other acts of hampering investigations.

Easter attacks: case of Maulavi & 24 others to be taken up in Jan

November 23, 2021 byRuwani Fonseka No Comments
The case against Naufer Maulavi and 24 others accused over the Easter Sunday terror attacks will be heard on 12 January 2022.

August 10, 2021 byNews Admin No Comments
Public health trainees and students must constantly build on, disseminate, and translate the public health knowledge and evidence base into practice, by conducting high-quality research within the set