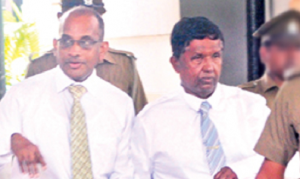 The Former President’s Chief of staff  I.H.K. Mahanama was sentenced to 20 years rigorous imprisonment after he was found guilty for soliciting a bribe of Rs. 20 million.

The Permanent High Court at Bar delivered the order when the case was taken up this morning (19).

The two persons were arrested by the Bribery Commission for allegedly soliciting a bribe of Rs. 20 million from an Indian businessman named K. Nagaraja in order to transfer the machinery equipment belonging to the Kantale Sugar Factory in May 2018.

October 22, 2018 bythemorninglk No Comments
The Navy defended the decision to acquire used ships from other countries saying they have always served its purpose.

20A will not be reversed: Shehan Samarasinghe

September 22, 2020 byCharindra No Comments
Minister of State Shehan Semasinghe stated in Parliament today (22) that there is no room for turning back on the 20th Amendment.