Excelling in a ‘man’s industry’

March 8, 2021 by Karen Hapuarachchi No Comments 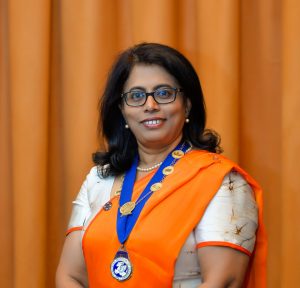 Amidst the bustling streets of New York City (NYC) in 1996, a record written by James Brown, the Godfather of soul himself, and Betty Newsome “It’s a Man’s Man’s Man’s World” functioned as a social statement and a tribute to women in the 90’s.

Today, Brown’s words “Man made the cars to take us over the road” are contradicted as females account for nearly half – or 49% – of undergraduate enrollments in STEM (science, technology, engineering and mathematics) subjects in local universities by 2017, in comparison to a global figure of 35% according to the University Grants Commission (UGC). Additionally, one woman who stands as an inspiration to young girls is Gayani De Alwis, who is an Engineer and leader of Women in Logistics and Transport.

Having completed her studies in Engineering at the Moratuwa University, De Alwis started her journey when she returned to the country after leaving to obtain a Masters Degree in engineering abroad.

Afterwards, when De Alwis applied for a Management Trainee position in Unilever Sri Lanka, she was questioned about her ability to overcome the challenge of working among a male-dominated factory, or a man’s factory.

“When I joined the company because of the background and qualifications I had, the first question they asked me was, ‘You will be the only female in the factory. As all the rest are men, do you think you’re up for that challenge?’ and I agreed without batting a lid as I did engineering, and in the entire background of 200 students, there were only 20 ladies,” De Alwis stated.

She was selected for the role and initiated her career of 20 years at Unilever. In addition, during her journey in the factory, it was stated that her role in the management department involved inter-connections to other departments whilst communicating and working with almost all departments at the same time.

However, De Alwis mentioned there was “no hard-core manufacturing” involved in the process. She also highlighted that her role fitted her personality, and she did not find it very difficult because of her natural ability to communicate, manage, and resolve matters professionally and calmly.

“By nature, I’m a very friendly person and people-oriented person. Thus, for me, with how we were brought up at home, the power difference was irrelevant, as everybody is equal. So, it was never a ‘come-down’ to speak to workers at a lower hierarchy than me,” De Alwis commented

Thus, De Alwis credited her ability to excel in her position in Unilever management on her natural ability to communicate and manage, as well as her resilient attitude, childhood upbringing, and personality.

The Chairperson of WiLAT also depicted her upbringing since her childhood, and De Alwis illustrated that in her case; equality was first taught at home. Moreover, she stated that her family did not teach her to treat men and women differently, rather equally. Thus, she theorised that this helped her in her confidence to work in a “Man’s field” and motivated her to excel in her career without doubting herself too many times.

“I don’t consider that I am a female when I am doing something. Don’t doubt yourself just because you’re a woman,” De Alwis stated.

Furthermore, having served in a management position in Unilever, De Alwis was sent abroad as the company wished to utilise her abilities in Bangalore. She stated that after two years of working abroad and returning to Sri Lanka, she developed a change of heart in her career.

“I realised that in Engineering, there is a certain level beyond which you can’t go. So if I pursue this path, then I have more opportunity to go up the career ladder,” De Alwis revealed.

In addition to this, during her career in the supply chain, De Alwis mentions that her role in another male-dominated industry such as supply chain turned heads. However, she also highlights that some of the turned heads were filled with doubts about her ability to succeed in a “Man’s Industry”.

“I had some resistance from some of the men but I did not wither. I thought the only way to show them I can do it, is to learn the subject. If you can perform and deliver, nobody can challenge you,” De Alwis stated.

“There was one guy who was working in the field for 30-odd years and who was a veteran in logistics. At the time, I was given additional responsibilities in logistics and he had to report to me. He was a bit uncomfortable to report to me those days, but it’s not like that now – this was in 2002,”  She mentioned.

De Alwis also revealed one challenging task she took upon herself when she was managing the workforce. She mentioned that a trade union of transport drivers gathered at the gate, and she decided to speak to a group of upset employees to resolve matters calmly.

“Although I seemed not scared, I was scared because we now had a problem in the company as to how am I going to operate without these workers if they refuse? So I went with another employee to the gate and I asked ‘what is the problem?’ and I explained that there is a way to solve problems,” De Alwis said.

“I said if you want to fight against Unilever, we will also take you head on like that, if you want to solve this, we can talk like decent people. I also said if you are not willing to discuss this, I will get workers from the market and run the company. So I was very stern, even though I was scared,” She added.

De Alwis further said that all the members apologised and came back to work after she hired freelance drivers for a period of time. She further highlights that sometimes women may have to face similar challenges.

In addition to this, the WiLAN Chairperson stated that after the initiation of her career, the applications to the industry of supply chain and similar male-dominated industries increased, as more women believed that it is likely for them to get selected for the relevant role and excel in it, just as De Alwis did.

“After I joined the company and took on these responsibilities, more women started applying. Women realised that ‘if she can do it, we can do it’. Thus, when I joined, we had about 15% women, and towards my retirement we had 32% women in the work field,” she revealed.

De Alwis also highlights that women should balance their feminity when working in a male-dominated industry. She further explained that women have to make it clear that they are strong as well as have the ability to deal with stressful situations, like the instance she mentioned.

Also, De Alwis further highlights the importance of avoiding possible instances of work harassment. Having expressed her gratitude for strict policies and regulations in Unilever and the supply chain that protected her from this negative aspect of work, De Alwis mentions that it is essential that women analyse their surroundings and think twice about what their co-workers expect from them.

In addition to this, De Alwis also stated that it is pivotal for companies to initiate projects and educate male workers, as well as children in schools, regarding boundaries, consent, and respect that females deserve.

Lastly, De Alwis stated that if there is anything that she would like to advise her younger self on, it would be regarding confidence. She further added that confidence can help anyone travel miles in their careers, especially women.

De Alwis is currently working on freelancing as a consultant with her knowledge on logistics and transport. In addition to being the WiLAN Chairperson, De Alwis highlights that she wishes to follow her passion on increasing women’s awareness on supply chain activities and encourage them to excel in a man’s industry, just as she did.

PM thanks tourism sector and security forces for retaining No. 1 spot

July 8, 2019 bythemorninglk No Comments
Prime Minister Ranil Wickremesinghe today thanked the tourism sector and the security forces for Lonely Planet reaffirming their ranking of Sri Lanka as the best place to visit in 2019