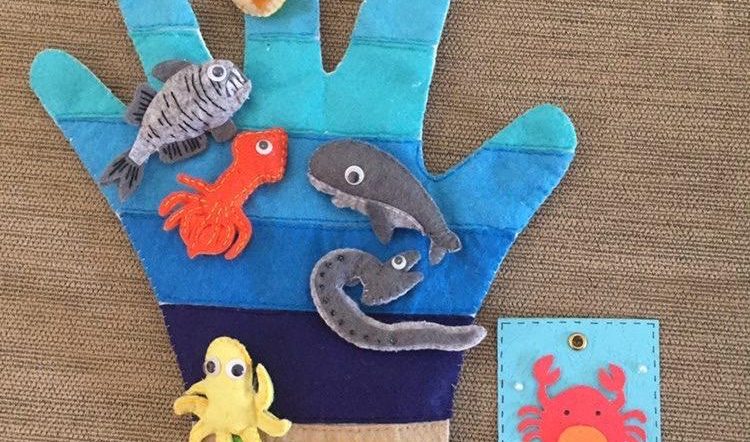 Exploring the ocean through story 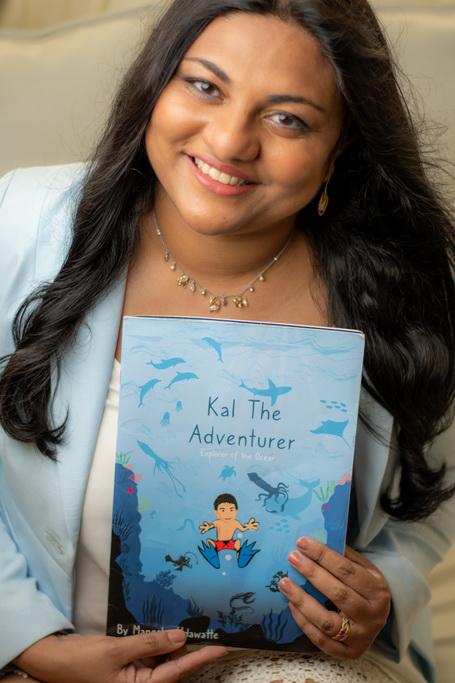 “It’s okay to use big words with children – you just need to explain them. The words that I used with the book, I used very consciously. There is a glossary in the back, but the words are also explained within the story” Manesha Udawatte

Author and educational consultant Manesha Udawatte has been writing since as long as she can remember. Her background in teaching and knowledge on kids motivated her to pen her children’s book Kal The Adventurer – Explorer of the Sea. This book is part of a series, with more stories in the making.

Brunch had a chat with her about storytelling and what other books she has in store for us. She informed us that writing Kal The Adventurer took as little as a week, but sitting down to actually write the book took her a good couple of months. Udawatte added that it took her six months to conduct research, gather facts from books and the internet, and fact-check for her book.

“Writing was not a challenge, editing took a few days, but getting started was the biggest challenge of all,” she shared.

Her book and main character Kal was inspired by her curious three-year-old son, Kal-El, who she said is constantly full of questions about nature and how the world works.

Udawatte was a part of a series of holiday programmes she conducted at the British Council Library, linking literacy with nature and science. “The ocean zone activity that I conducted was a huge success, so much so that we had to repeat it three times. When I conducted research for this activity, I realised I learned things that even I didn’t know and understood – that this is something not a lot of kids or even adults would know about. That’s how I came up with writing this particular book.”

Sharing more details on her book, she commented that it’s about a little boy who jumps into his bathtub which turns out to be a magic portal, where he is transported into the ocean zone with his bath toy, the crocodile. Kal explores the five ocean zones and has an interesting adventure in each, where he learns more about sea creatures and their environment. She added that she did a lot of research on the subject and thought of how she could impart that knowledge in a fun, playful manner.

We asked Udawatte how she honed her writing style to work in such a way where kids could grasp the concept she’s teaching, to which she said that with Kal The Adventurer, she humanised the animal characters that the little boy meets on his adventures and lets them tell him what’s special about the ocean zone and its inhabitants, so they could discover it through another child’s perspective.

Her background with teaching kindergarteners also came in handy when writing kids’ stories, and she said that when she wrote the book, she had a pretty good idea of the level of language she needed to use. She said a very common misconception adults have when it comes to children is that if you use big words, children will not understand, which she claimed is entirely untrue.

“It’s okay to use big words with children – you just need to explain them. The words that I used with the book, I used very consciously. There is a glossary in the back, but the words are also explained within the story; for example, one of the characters says ‘photosynthesis’ and Kal inquires about what it is, to which the answer is also explained in story format.”

Sharing her personal experience, Udawatte added that her child, at the mere age of three, knows the story of The Odyssey. She had bought him a picture book with monsters and he began learning words like the Cyclops and lotus-eater, and eventually turned to his mother asking for the story about the Cyclops or other monsters. “Yes, you need to tone down the length and language, but you don’t need to restrict their vocabulary or ‘babify’ the words. Kids are fast learners,” she said. 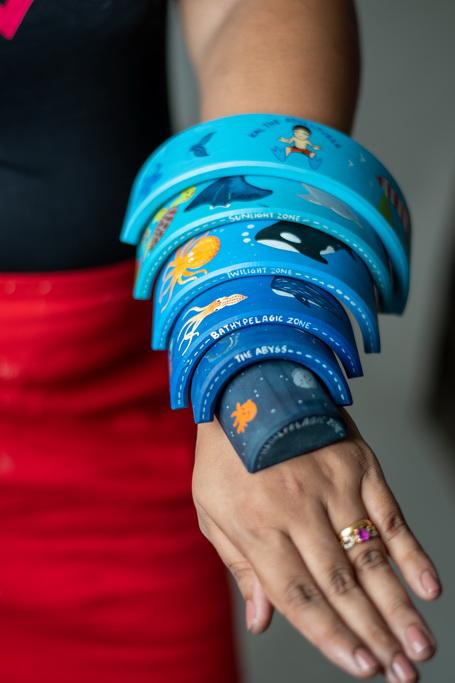 In the age of technology, we see many kids turn to electronic devices and neglect the joy of good old-fashioned reading. We asked Udawatte for her thoughts on this. “I don’t think reading or stories should be restricted to just written words. As a drama student, I understand the art of storytelling. In my opinion, a good reader doesn’t have to be a person who reads.”

Using her husband, who is also her illustrator, as an example, she commented that he is “a person who has never read a book in his life”, but that doesn’t mean that he won’t get his knowledge elsewhere. This is why she stretched the importance of audio and animated books.

“Kal The Adventurer has an audio book version voiced by Dilan Irugalbandara from Voice Print, which is for people who are visually impaired, dyslexic, or just don’t like to read,” Udawatte noted. She highlighted that bringing up children who love stories or reading doesn’t necessarily mean that they have to stick to reading words out of a book.

She also collaborated with a few women in a small business to make merchandise for the book and went on to sell them in book bundles. Talking about the merchandise, she added: “Rishma Rizvi (@soapstorisofficial) came up with an ocean-themed soap, Shamin Abideen (@pomsisland) created an ocean stacker with the five layers of the ocean, Fazla Milad (@edutoyslk) made feature creatures, @tapro_toys came up with a five-layer oceans puzzle, and 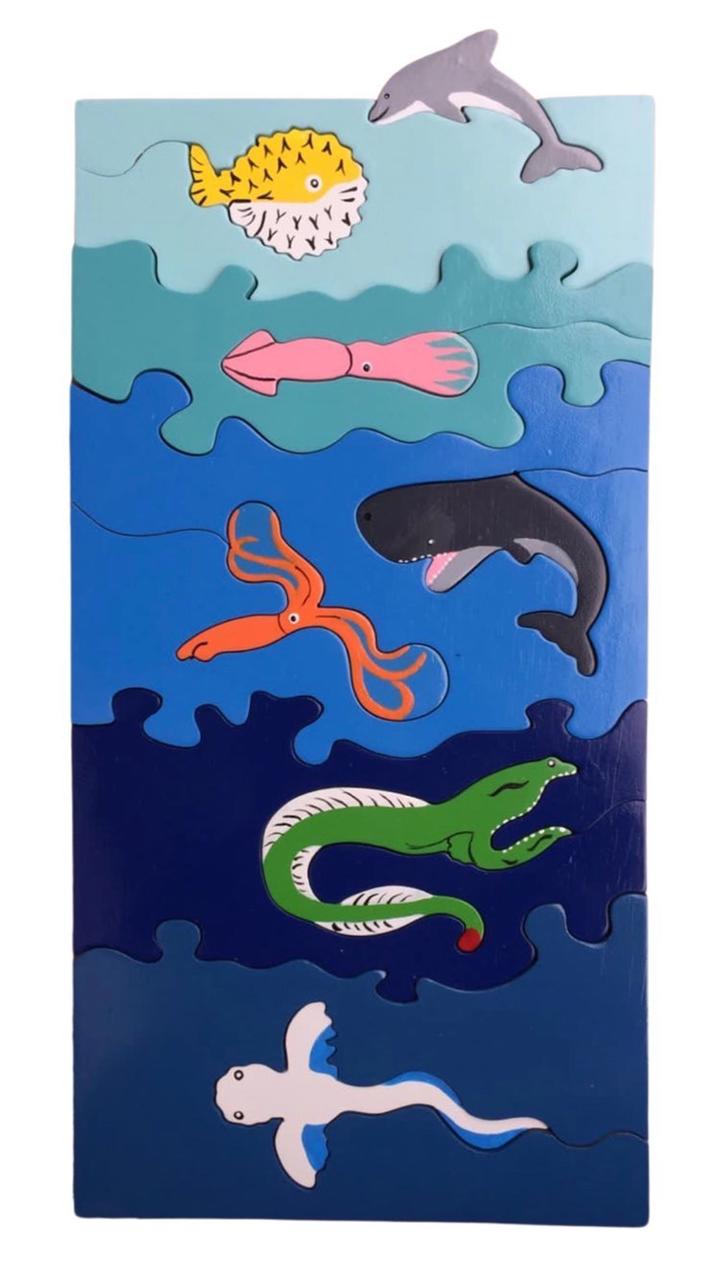 Udawatte added that she did not charge these small businesses a cent, but only charged a small fee for royalties with the wooden creature set, which went to her illustrator, to highlight the importance of paying to use other people’s art. She believes strongly in empowering and helping out other women and small businesses. These book bundles were sold out to the point where they had to make more.

Having a strong background in education and kids, we asked Udawatte for advice on what kids can do during the lockdown to keep themselves entertained and still learn something at the same time. She had quite a few suggestions. “One may think that this lockdown is a huge inconvenience, but I chose to look at it in a positive manner. I’m currently homeschooling my kid, and I am enjoying it. I have a very busy schedule, but I always make sure my kid and I do a lot of experimenting.”

She observed that because commuting time is cut off these days, the pandemic is a golden opportunity for kids and parents to work on getting independent and exploring. “We sometimes have picnics in the living room, or go outside and look at creatures in the garden and read a lot of books.”

The biggest advice she gave to parents and kids is to listen to each other, adding that there are many times where her son questions her, but she brushes it off telling him to ask later. This is not a good practice, so she often ends up going back to him and asking him to repeat his questions, and learning about the answer together. She encourages parents to use resources like Pinterest and Instagram to draft out a list of activities that they can do with their kids in order to strengthen their bond and help them learn more. Even doing chores and helping cook is all part of a learning experience, she stated.

Udawatte has two more books coming out this year, one following the Kal The Adventurer series and another on pilot whales and stranding.

Sharing more information on the books, she said she wanted the second Kal The Adventurer book to be about the forest. After conducting research, she found out that Sinharaja also has five layers, so that is where her book will take place and she will examine the delicate network of ecosystems: How flora and fauna are connected to each other and human beings. The other book is a standalone book based on the pilot whale stranding last year during lockdown and is written from the whale’s perspective.

“I learned so many interesting details about these whales, so I concocted a story about a pilot whale pod: How they got stranded and the rescue. The book is short, but I hope it will make an impact,” she shared. When reading these books with kids, there is no doubt that there is something new for all of us to learn, with the amount of research Udawatte puts into her stories.

March 11, 2021 byNews Admin No Comments
Numa The Concept Store recently opened its doors for the first time in Colombo 7, on 4 March. The event was graced by many influencers, philanthropists, local entrepreneurs, and media personnel alike.

Interpersonal edge: What to do when integrity is a rare commodity?

January 6, 2022 byNews Admin No Comments
I find many people in my workplace make great sounding promises and fail to deliver. I’m starting to not believe people when they make commitments. I don’t want to make the same mistake. How can I dem