October 14, 2020 by themorningeditor1 liberty No Comments 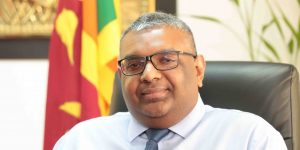 Sri Lanka’s merchandise exports have surpassed the $ 1 billion mark in September after July during this year.

Export Development Board (EDB) Chairman Prabhash Subasinghe said: “I am extremely pleased to see $1 billion of exports in September. I salute the entire export community, our resilient businesses, and all employees in the export sector for this remarkable performance. It is the third time this year we have seen a year-on-year (YoY) increase of merchandise exports. However, we are concerned about the recent escalation of Covid-19 in Sri Lanka but hopeful of a swift recovery and a stable level of business continuity. Our businesses must continue to be resilient whilst facing the unknown and must have strong Covid-19 preventive measures in order to bring in the much-needed foreign currency for Sri Lanka.”

In addition, export earnings from rubber and rubber-finished products increased by 10.54% YoY to $ 80.01 million in September 2020 due to the better performance in exports of pneumatic and retreated rubber tyres and tubes (5.19%), industrial and surgical gloves of rubber (22.7%), and gaskets, washers, seals, etc. of hard rubber (11.74%). However, exports of rubber plates, sheets rods of vulcanised or unhardened rubber and hygienic or pharmaceutical articles have decreased by 12.56% and 30.77%, respectively, in September 2020 in comparison to September 2019.

Export earnings from spices and essential oils have increased significantly by 24.14% to $ 38.93 million in September 2020 compared with the value of $ 31.36 million recorded in September 2019 with significant increase in export of cinnamon (50.06%).

Export Performance during the period of January-September 2020

Total merchandise export earnings for January to September 2020 was $ 7,401.48 million compared to $ 8,872.57 million recorded in a similar period of the previous year – a decline of 16.58%. However, this shows an improved performance compared with the decline of 19.2% recorded in January to August 2020.

Earnings from export of PPE (Personal Protective Equipment)-related products increased by 42.91% to $ 636.67 million in January to September 2020 compared with the value of $ 445.51 million recorded in the corresponding period of the previous year. The strong performance was mainly due to the increased exports of other made-up articles (HS 630790) and articles of apparel and clothing accessories of plastics (HS 392620).

The revised export target of the EDB for 2020 is $ 13.39 billion and of that, it expects $ 9.57 billion from merchandise exports and $ 3.82 billion from services exports. During the period of January to September 2020, earnings from exports were recorded at $ 9.69 billion including the estimated services data for July to September and 72.4% achieved from the revised export target.

Furthermore, earnings from merchandise exports and services exports achieved 77.33% and 60.06%, respectively, during the period of January to September 2020.

January 23, 2022 byNews Admin No Comments
Despite a jump at the Colombo Stock Exchange (CSE) following a long weekend, the market took a fall last Thursday (20) after a policy rate announcement by the Central Bank of Sri Lanka (CBSL).

March 25, 2021 byNews Admin No Comments
Investment banking and capital market activity should continue to bolster the earnings of the 12 Global Trading and Universal Banks (GTUBs) in 2021, Fitch Ratings said in a new report. Capital and fin