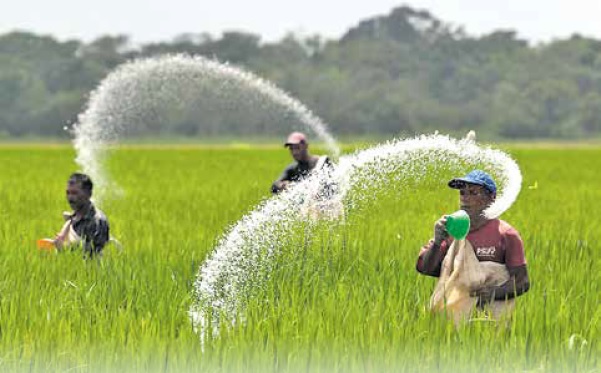 Sri Lanka’s farmers are facing increasing challenges related to recent climate change and adverse weather impacts on top of the difficulties brought on by the Covid-19 pandemic as well as the ban on chemical fertilisers.

The main farmers’ association in the country stated that the farmers in the southern and western plains were the most affected due to the monsoon rains and there were a large number of new zones affected by the recent floods.

Speaking to The Sunday Morning, All-Ceylon Farmers’ Federation (ACFF) National Organiser Namal Karunaratne said that there is a significant drop in paddy and vegetable crops, mainly cultivated in the Gampaha District, due to the recent floods that occurred as a result of non-standard constructions.

“These are human-made disasters. There is a large amount of cultivated land in the Gampaha, Colombo, and Kalutara Districts that have been affected due to the recent floods. The most important fact is that those lands had never been affected previously due to floods.”

Karunaratne said that the main reason for this impact is the non-standard development around the expressway on the relevant ecosystem.

Explaining the current situation further, he said: “None of these development processes can be described as developments that took place with a proper environmental analysis. Today, the floods caused by wetland reclamation have caused extensive damage to small and large-scale farmers around the expressway.”

Providing a scientific explanation, Karunaratne said: “This damage is due to the accumulation of silt on the seedlings for days. Normally a well-grown paddy tree can produce 30-35 grains of paddy, but this silt deposit reduces the quantity. Generally, paddy varieties that can be harvested in a short period are cultivated during the Yala season. But such disasters can reduce the expected high yields in a short period.”

He added that vegetable growers could also see a decline in their yields due to fungal and bacterial infections caused by the recent floods.

“Usually, vegetable crops are expected to bear fruit quickly in a short period. Hybrid seeds are often grown to produce such a quick crop. Due to the depositing of water on these crops and the damage to their root system, the impact of fungal and bacterial infections on them is high. As a result, the fruit has to be discarded as unfit for human consumption,” he said.

Responding to The Sunday Morning’s query on the most affected varieties, he said that short-term vegetable crops such as radish, cabbage, capsicum, beetroot, and fruits such as watermelon are highly affected varieties due to the recent floods.

Claiming that the Government has not yet prepared a proper plan to buy the damaged crops of the farmers though there is cabinet approval, Karunaratne said that earlier, the farmers’ association suggested using trains to distribute the crops across the country.

“In this pandemic situation, we had suggested that the Government use the trains for the distribution purpose of crops throughout the country. However, the relevant authorities ignored our suggestion.”

Meanwhile, a farmer named Gune from Welimada said that there is a considerable loss in their vegetable crops due to the recent heavy monsoon rains as well as the unavailability of fertiliser.

He said: “There are no seasons for vegetable farming, but the Government had only considered two main seasons when banning the importation of chemical fertiliser. As vegetable farmers, we need fertiliser daily for our cultivation. Moreover, the recent heavy rains had also triggered the drop in our yields.”

The agriculture sector is vulnerable to climate change and extreme weather patterns. The frequent occurrence of adverse weather situations will be a side-effect of inappropriate water management and agricultural planning.

Sunny Side Up: SF’s lesson on gratitude to RW

June 12, 2022 byNews Admin No Comments
Field Marshal MP Sarath Fonseka has given a lesson on gratitude to Prime Minister Ranil Wickremesinghe while also making references to past incidents.

November 22, 2020 byNethmi Liyanapathirana No Comments
While some economists agree with the imposition of import controls and restrictions, importers and traders alike have criticised the method by which the ban was imposed.