Families of missing want nothing short of justice 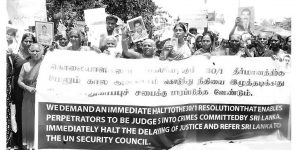 The families of the missing asserted that they would continue their fight and push for nothing short of justice.

Some families are also not satisfied with the Rs. 6,000 monthly relief offered through the 2019 Budget.

Activist and former Northern Provincial Councillor Anandi Saseetharan said that the families of the missing needed to know what happened to their loved ones.

She said that while financial assistance would be accepted by some families, as they face severe financial difficulties while going about their day-to-day lives, there are others who will not accept money.

“I myself will not accept the money. I need to first know what happened to my husband. Offering money is just eyewash,” Saseetharan, whose husband was reported missing since the final days of the war, told The Sunday Morning.

Saseetharan is the wife of former LTTE Trincomalee District Political Head S. Elilan. She continues to claim that her husband went missing after he surrendered to the Army. The Army however said it had no information on Elilan.

The Government proposed the allocation of Rs. 500 million in the 2019 Budget, to provide Rs. 6,000 as monthly relief to support families of missing persons including members of the armed forces and Police identified as “missing in action”.

Saseetharan, who represents families of the missing in the North, said that Rs. 6,000 was not sufficient to maintain a family with children.
She noted that women whose husbands went missing have to support not just themselves but their children as well.

She said that for Rs. 6,000, expenses pertaining to just part of the daily meals may get covered, but nothing else.

She noted that with education levels in the North being low, most women send their children for private tuition classes.
“Rs. 6,000 will not help women with little or no income to live a decent life,” she said.

Saseetharan stated that personally, she would not accept Rs. 6,000 and instead, would demand answers and justice for her missing husband.
“The international community has abandoned us by not pushing the Government to give us justice, but we will not rest. We will continue our fight,” she said.

As proposed in the Budget, the monthly relief will be provided to families who have obtained certificates of absence until the Office for Reparations resolves their claims.

The Office on Missing Persons (OMP) welcomed the inclusion of its interim relief proposals in the 2019 Budget.

In its Interim Report, the OMP recommended that a financial aid programme be implemented to provide a monthly living allowance of Rs. 6,000 to the surviving spouse, child/children, and/or surviving parent/s of a missing/disappeared person who has no permanent income (Para. 45(a), Interim Report) and may be affected by other vulnerabilities.

The OMP noted that the linkage of the monthly relief to the possession of a certificate of absence (COA) posed a challenge. The OMP has a legal responsibility to facilitate the provision of COAs and is in the process of devising methods to increase awareness and assist families to apply for COAs.

However, Saseetharan said that most families of the missing had already rejected the OMP as well.

Saseetharan said that she hoped to travel to Geneva to present her case to the UN Human Rights Council, but was refused leave by the government institution she worked for.

Issue on missing before UN

Leeladevi Anandarajah, another activist, managed to get to Geneva and raised her frustrations over the failure by the authorities to address the issue on the missing.

Anandarajah said that the families of the missing had maintained that they could not accept the OMP and so the international community must act to ensure an independent mechanism was in place to address the issue.

She added that the families of the missing had lost faith in the Sri Lankan Government and would look to the international community for answers.

Last week, families of the missing staged a massive protest in Batticaloa, disrupting traffic and normal movements in the Batticaloa town.
Most shops were closed while public transport was affected as a result of the protest and a general shutdown was declared in some parts of Batticaloa.

The families of the missing and others walked along the streets in Batticaloa demanding international intervention to find those who were missing.

A general shutdown was also called for in parts of the North in support of the protest in Batticaloa.

February 7, 2021 byLahiru Pothmulla No Comments
A total of 161,773 personnel have been vaccinated against COVID-19 in Sri Lanka so far, Chief Epidemiologist Dr. Sudath Samaraweera said.

May 12, 2020 byTSM Web Desk No Comments
The Colombo Stock Exchange (CSE) resumed trading a short-while ago after trading was halted for 30 minutes today (11) as the S&P SL20 index had dropped by over 5% during the trading session.