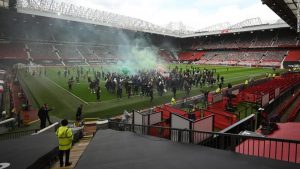 Manchester United’s Premier League game against Liverpool was postponed after fans broke into Old Trafford to protest against the Glazer family’s ownership of the club on Sunday (2).

The fixture was scheduled to kick off on Sunday evening but it was called off just before the two teams left their hotels.

Fans had gathered outside the ground and scores of green and gold flares, remembering the colours of United’s first shirts when they were formed as Newton Heath in 1878.

The protests follow United’s decision, along with five fellow Premier League clubs, to join the European Super League (ESL) last month. It all fell apart within 48 hours after players and fans showed their anger towards the alleged tournament. 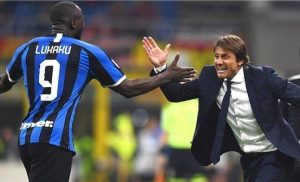 Conte speaking to the media, said “I’m astonished. We’re breaking up a dynasty. Not even in my wildest dreams could I have imagined that we’d make up this much ground on the team that dominated Serie A for nine years in the space of two seasons.”

He started Juventus’s record run – winning the first three titles. Juventus had a nine-year streak until last year where Conte’s Inter Milan was runner up.

Inter are now second for league trophies with 19, City rivals AC Milan are second with 18, but both teams are way short of Juventus’s 36. They had not won Serie A since Jose Mourinho’s historic Champions League, Serie A, and Coppa Italia treble in 2010. 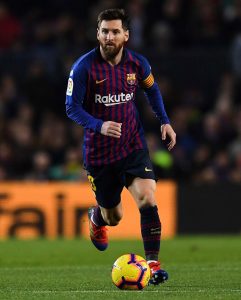 The Ballon d’Or is back after it was not awarded last year. Many believed it should have been awarded to Robert Lewandowski after his prolific year for Bayern. However, the football community is eagerly waiting for who would end up with the biggest individual honour the game has to offer.

Although the prize is scheduled to be awarded in December, the next couple of weeks will play a major role in the decision. It is the business end of the season and all major players are bringing their A-game to the fore.

Currently, Mbappe, Messi, and De Bruyne are the three front-runners for the prize. The Frenchman has been on top for so long but after a quiet few weeks, Messi and De Bruyne have closed down the gap.

De Bruyne and Mbappe will face each other for the second leg of the Champions League semi-finals next week. Messi has peaked at the right moment as Barcelona makes the final surge to win the La Liga title this year.