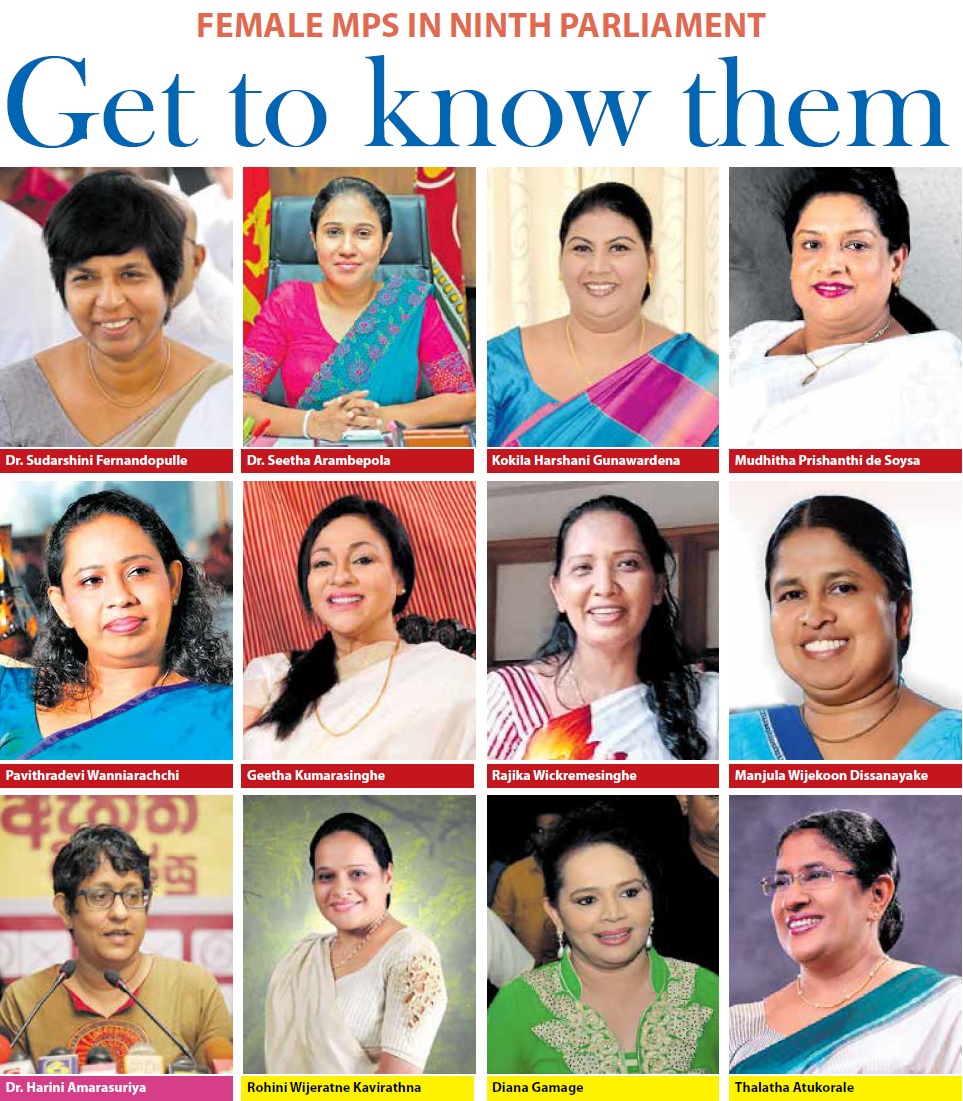 Female MPs in the ninth parliament | Get to know them

Given that this time too Sri Lanka managed to send only 12 female MPs to Parliament and that there is no Cabinet portfolio dedicated to oversee women’s affairs, the 52% female population in Sri Lanka will have to push these female representatives to make enough noise about the teething issues women face on a daily basis, due to archaic laws and regulations that are hindering them from pursuing their prospects in the work environment, as well as the ability to enjoy the freedom to live as independent citizens of Sri Lanka.

The Sunday Morning managed to speak to a section of the handful of women MPs this week to understand their roles and how they are going to contribute towards the betterment of Sri Lanka while being a voice for all women in the country in Parliament.

We will be speaking to the rest of these female representatives next week to gather their sentiments.

A very familiar face for many, given that she has served as a medical doctor since 1986 and was elected to Parliament in 2010 from the Katana electorate; fate had pushed her into politics, as the people of Katana had requested her to contest from the seat that was made vacant following her husband’s demise in April 2008.

Dr. Fernandopulle retired from her 24-year state service as a medical professional to enter active politics and since 2010, has been able to secure a seat in Parliament in consecutive elections. She has chaired several committees as an MP, specifically focusing on child development and preventing harassment towards women, and has also served in the Parliament Select Committee for Public Grievances, attending to resolve many issues faced by state sector workers.

The Sunday Morning spoke to Dr. Fernandopulle following her appointment as the State Minister of Prisons Reforms and Prisoners’ Rehabilitation to ask about her sentiments on the number of female representatives elected to Parliament and her new portfolio.

“I suppose we are stuck at the 5.33% female representative ratio in Parliament for another four years. While we are saddened that not many decided to vote for female representatives, we can continue our cause in improving the number of female representatives at the local government level to 25%. It is partially the fault of the political parties as well, as they should allow the space for women to contest from their parties,” Dr. Fernandopulle commented.

She also stressed that except for Pavithradevi Wanniarachchi, Thalatha Atukorale, Geetha Kumarasinghe, and herself, the rest of the female representatives are first-time entrants to Parliament and that they would have to be directed on how to use their positions in Parliament and being members of the Women’s Caucus to be the voice for 52% of Sri Lanka. She also highlighted issues that are faced by women and children.

“Even during the previous Government, the amount of issues that were discussed about women and children was quite low. This time, we are hoping that we will be able to get these female MPs to bring up issues that need to be immediately addressed to empower the women of Sri Lanka and ensure that a safe and equal environment is created for them,” Dr. Fernandopulle added.

When asked about her recent appointment as State Minister of Prisons Reforms and Prisoners’ Rehabilitation, Dr. Fernandopulle noted that she is quite satisfied to take over the responsibility of attending to the longstanding humane issues faced by inmates that need to be addressed.

She also noted that prisons need to be seen as a place for rehabilitation and correction and not a place of conviction. While it seems like a difficult task at first, she said that she is willing to put her mettle to the test and has already approached several organisations and professionals in the vocational training, psychological, and medical spheres to assist in changing the mechanism with the Department of Prisons.

In addition to that, Dr. Fernandopulle also noted that she will continue with her social responsibilities and projects she has been continuing as a politician to ensure that a safe environment is created for children to receive their primary education and also to empower and encourage women who have become the breadwinners of their families due to various social circumstances.

Dr. Seetha Arambepola rose to fame in the political arena after she was appointed as the Western Province Governor. An ENT surgeon by profession, Dr. Arambepola has practised both locally and internationally since 2013.

Serving as the State Minister of Skills Development, Vocational Training, Research, and Innovation, she has already eased into her role as a state minister, conducting many meetings with various stakeholders that she would be working with during her term in office.

Speaking to The Sunday Morning, Dr. Arambepola noted that education is the basic foundation for the creation of a prosperous, productive country, productive citizens, a happy family, and a just society, which is the hope of thousands of people in this country.

“The President has named the next decade as a decade of skill development. I think a lot can be done through my ministry to prepare the background for them to build this country and become prosperous. The legal background has been prepared for that,” she elaborated.

Having worked as a political activist for 15 years, she noted that she will look at addressing all the issues that the people of Mirigama have brought to her.

“I know the issues the people who voted me in have been facing for decades. The areas have water supply issues, road connectivity issues, and education-related issues. I will ensure that the budgetary allocations that are set aside for the Gampaha District will be efficiently utilised to develop and uplift the livelihoods of the residents of this district.

“Furthermore, I will closely work with local government institutions to make sure the rural areas of Gampaha get developed in the next four years while I am the people’s representative and voice in Parliament.”

As the women’s leader of the SLPP for the Gampaha District, Gunawardena also agreed that women empowerment need to be a key focus with a lot of labour-intensive work required, especially by the women in her region. She said that she will look at empowering them to improve their skills in craft work and creating business awareness.

Muditha Prishanthi de Soysa stepped into politics after the voters from her deceased husband’s electorate had requested her to contest from the vacant seat representing the Sri Lanka Podujana Peramuna (SLPP).

“At no point did my husband encourage our son or myself to get involved in active politics. However, after deep consideration following the request made by the voter base of Ratnapura, who time and time again supported my deceased husband during his political career, as well as the invitation extended by Prime Minster Mahinda Rajapaksa, I decided to contest in this election.”

She said that the people of Ratnapura did not disappoint her and had casted enough votes for her to secure a seat in Parliament.

“Though I cannot move at the same speed as the skilful politician he was, I just can’t isolate supporters who were by his side. I promise to use all my capabilities and skills in carrying out the political work my husband left behind,” de Soysa noted.

Contesting from the Ratnapura District, Pavithradevi Wanniarachchi managed to gain the highest number of preferential votes from the district during this election. Given her work as an interim cabinet minister during which time Covid-19 broke out and the country had to immediately follow a lockdown protocol to prevent the virus from spreading, she was once again appointed as the Minister of Health.

Entering Parliament in 1994, Wanniarachchi followed her father’s (Darmadasa Wanniarachchi, Member of Parliament from 1965-1977) footsteps into Parliament and hails from a well-known business family in Ratnapura. A lawyer by profession, since she entered politics, she has ensured that the people in Ratnapura had a voice in Parliament, and during her stint as the interim Cabinet Minister of Health, she managed to upgrade many hospitals in the Sabaragamuwa Province.

In 2010, Geetha Samanmalee Kumarasinghe contested under the United People’s Freedom Alliance (UPFA) from the Galle District but could not secure a seat in Parliament. Not shying away from her defeat, she continued her political journey and became a political activist, working in the grassroots levels for five years.

The five years of campaigning from 2010-2015 paid off when she managed to secure a seat in Parliament during the 2015 general election. However, her dual citizenship became an issue, questioning her loyalty to Sri Lanka, and she was unseated.

Renouncing her citizenship in Switzerland, Kumarasinghe once again pursued her political career, not bowing down to the various challenges she had to face, and emerged victorious during this year’s general election, managing to secure enough preferential votes from the Galle District to enter Parliament.

Kumarasinghe claims to have retired from her acting career and said that she is fully dedicated to serving the people of the Galle District, who have continued to trust her and voted her in for a second time.

Having first been elected to Parliament in the year 2004 through the United National Party (UNP) and through the seat made vacant by her brother’s demise (Gamini Atokorale, who died in January 2002), Thalatha Atokorale was later appointed as the Minister for Foreign Employment Promotion and Welfare during the Yahapalana Government from January 2015 to February 2018. She was later appointed as the Minister for Prison Reforms from May 2018 till September 2019. In the meantime, she also served as the Minister of Justice from August 2017 till September 2019, becoming the first female parliamentarian to hold the position. Atukorale secured a seat in Parliament in this year’s general election through the Samagi Jana Balawegaya (SJB) from the Ratnapura District.

Contesting through the National People’s Power (NPP), Dr. Harini Amarasuriya was nominated to Parliament through the National List. A senior lecturer at the Department of Social Studies at the Open University of Sri Lanka, Dr. Amarasuriya completed her PhD in Social Anthropology from the University of Edinburgh, where her dissertation work explored the nexus between the state, development policy, and practice within the bureaucracy, specifically in relation to probation and childcare services in Sri Lanka.

Her work includes research in the areas of youth unemployment and conflict, gender, child protection, globalisation, and development.

Prior to joining the Open University, Dr. Amarasuriya worked as a child protection and psychosocial practitioner for several years. She currently serves as a Board Member of Nest Sri Lanka, a local NGO working in the psychosocial sector; the Centre for Women’s Research (CENWOR); and the Law and Society Trust (LST).

Rohini Wijeratne Kavirathna has been known for the immense support she rendered towards her husband’s (Sanjeewa Kavirathna) political career before his untimely demise in March 2014.

Her father, K.Y.M. Wijeratne Banda too was a well-known politician who served as the Minister of Agriculture.

Contesting via the Samagi Jana Balawegaya (SJB), Kavirathna is the only female representative to have been elected from the Central Province of Sri Lanka in the 2020 general election.

Trypanosoma: Can it be fatal?

June 3, 2019 bythemorninglk No Comments
With the third case of Trypanosoma infection reported in March from a Vet Clinic in Kadawatha, Peradeniya Veterinary Hospital is urging the public to be vigilant, especially if a pet canine falls ill.

June 19, 2021 byNews Admin No Comments
With the recent fuel price hike coming as a hard blow to the general public who is already worn thin from the third wave of the Covid-19 pandemic, things only seem to be getting worse.