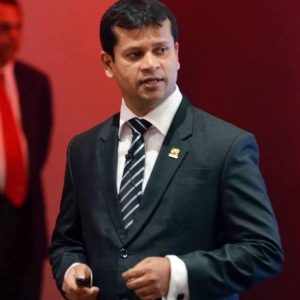 * Jaswar Umar claims he has 115 votes, positive of winning

* Elections to be held at the BMICH

The  Football Federation of Sri Lanka (FFSL) Annual General Meeting (AGM) which was scheduled to be held on Monday (7) was postponed indefinitely due to the extended travel restriction in the country as a countermeasure to the spread of Covid-19.

Jaswar Umar is contesting Dr. Manil Fernando for the FFSL post of presidency this time.

FFSL sources said the postponed election is likely to be fixed for the 22nd of this month but arranging a fresh date for the AGM depends entirely on the lifting of the ongoing travel restrictions in the country.

Jaswar Umar is not a new face to local football arena. He is a former senior football referee, the football world body FIFA and the Asian Football Confederation (AFC) Match Commissioner too. Umar has held numerous administrative posts in Sri Lankan football.

His manifesto for the FFSL election is titled “Attract, Invest & Develop, Achieve”. It looks into creating an interest in the society for the sport of soccer, then invest and develop the sport from the grassroots so that the country can bring back the glory days of soccer.

He also wishes to employ a clear segmentation in the development of local football where there will be separate teams of officials to look into the regional, national, and international development.

A trust fund and fifty mini pitches in five years

Starting a trust fund for those who served the game is also in Umar’s manifesto. The players, coaches, referees, and all stakeholders of the sports need assistance during the ongoing pandemic.

Umar’s vision includes building 50 mini-pitches round the island, a project which will be supported by the private sector. He is expecting an excess of the number of players in the island and more than eight million playing minutes during a year once his overall project is to complete.

For an added motivation and recognition of the soccer individuals here, he also wishes to hold a national and provincial football awards ceremony.

A team full of experience

He has selected individuals with experience to support his cause. Retired DIG Upali Hewage, a Vice President of FFSL, has been chosen for his General Secretary post. The four Vice Presidents will be Ranjith Rodrigo, present FFSL Media and Communications Manager, K.P.P. Pathirana, Arnold Emmanuel, and Dulshan Nagahawatta. A.F. Sellar would be the Treasurer and Nagarajan will be his Assi. Treasurer.

In a recently held media conference, Jaswar Umar declared he can have a comfortable victory in the AGM with around 115 votes out of the total number of 186.

June 2, 2021 byRevatha No Comments
Some memorable happenings on this day, in sports