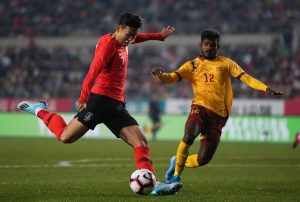 * Charith Rathnayake to miss out game due to suspension

(Live on TV1 or http://www.footballsrilanka.tcv/live)

Table toppers South Korea will be eying to finish the qualifiers on a high. Tottenham Hotspur player Son Heung-min scored two goals in the first leg against Sri Lanka.

It will be another tough outing for the lions and they will heavily rely on their Skipper Sujan Perera to be alert between the sticks. The Lankans will also be missing the services of Charitha Rathnayake who received his second yellow card in the previous game.

The Lankans almost pulled off a surprise win over Lebanon during the weekend. They were leading early on but eventually went on to lose the game by 3-2.

Wazeem Razeek’s ninth minute goal on the counter put Sri Lanka ahead but three quick goals in response from the Lebanese quickly shifted the momentum in their favour. The game was dominated by Lebanon.

Skipper Sujan Perera played a massive role guarding the goal throughout the game. Razeek scored his second through a spot kick in the second half and he hit the poles once through a free kick, but unfortunately Sri Lanka couldn’t earn a draw.

Barca, Real Madrid, and Juve under investigations on ESL

May 15, 2021 byRevatha No Comments
More football news from Europe

September 14, 2018 byRevatha No Comments
Asia Cup cricket will begin in Dubai on Saturday, 15 September when Sri Lanka take on Bangladesh in the curtain-raiser