August 27, 2021 by Dimithri Wijesinghe No Comments 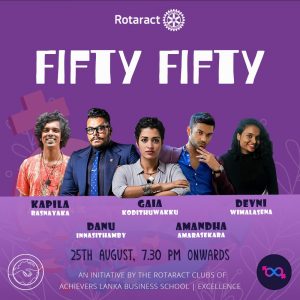 The panellists discussed a plethora of topics including gender mainstreaming, emotional effects of gender inequality, toxic masculinity, confidence building, and the impermanence of gender.


A key highlight of the event was the changing nature of gender expression due to the growing accessibility to all parts of the world. Our digital connectivity has made it so that we are more aware than ever about the freedom we have within ourselves to express as we see fit.


While gender equality is a topic that is widely discussed, the panellists brought forth a fresh perspective to the discussion, as they utilised a different viewpoint for the conversation – taking the time to look at the topic from the perspective of an individual engaged in a female-dominated industry.


Often, the conversation is based on the present and the general everyday lens which is tinted in patriarchy and male dominance. However, Amarasekara urged the audience and his fellow panellists to look at gender equality from the perspective of someone who comes from a female-dominated industry, like modelling.


He drew attention to the huge salary differences when it comes to female models and male models. Looking at the gender gap from a different lens, he highlighted why it is that an industry would prioritise one gender over the other. And it all boiled down to societal attitude.


He said: “Back in the day, ladies were more into fashion than men.” He added that while attitudes are changing, Sri Lanka is very much in the adolescent stages of these changes, and while we are growing slowly and painfully, one step at a time, the disparity becomes even more glaring.


Similarly, it can be assumed that things are certainly changing; with the changing attitudes in relation to women and their owed due appreciation in their respective fields, which for now, are male dominated, the effective factor would be this change in “societal attitude” and the need for us to fast track these changes and afford what we call “equal opportunity”.


Innasithamby also added to this conversation, sharing that it is important to note when you say “equal opportunity” that it is not in fact the misconception of “they have to do everything that a man does”; he said that it is the understanding the capacity of a woman and giving her that due opportunity.


Innasithamby shared that since his father’s passing when he was only six-and-a-half years old, his mother was who played the roles of protector, guardian, etc. and he said that what he saw was “masculinity in a more feminine way” and he has appreciated the fact that he was able to witness this broader viewpoint from that young age.


Kodithuwakku also shared that this element of “societal attitudes” weighs heavily on the discussion of gender equality, particularly elements of Sri Lanka culture.


She said: “When it comes to women, it is embedded in us to really look down upon ourselves – I think it comes from culture also. It is never enough; ‘you’ve gotten darker, skinnier, etc.’, and when you get to know that somebody else is living their truth you will attack them because it challenges your own identity.”


She said that it really comes down to your own identity. “Growing up I always saw my mom telling herself that she is ugly, when in fact she was a beautiful woman,” she said, adding: “All my life I saw her calling herself ugly and that translated onto me.”


Kodithuwakku said that she believes that this narrative has to change and a great way to change it is to speak out about our vulnerabilities because when you do, it strengthens you. “It is almost like therapy and speaking about your demons gives you strength and it applies to all, not just the minorities or the marginalised – it is for everyone.”

Is it too late to turn Ceylon into Sri Lanka?

October 3, 2021 byNews Admin No Comments
Sri Lankans and their apparently never-ending post-colonial hangover have remained a matter of contention for years, mixing in with just about anything we do. One such conversation to do with this pos

ExamHub: An innovative learning solution to level up your exam prep

May 30, 2021 byNews Admin No Comments
While globally education is headed in a favourable direction where it is starting to become learning-focused as opposed to exam-focused, Sri Lanka, if we are being optimistic, remains somewhere in bet