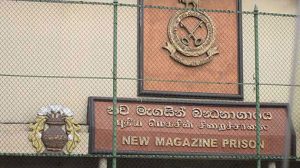 According to the Prisons Department, 54 parcels containing contraband including 47 mobile phones were thrown into the Magazine Prison between October 12 and December 31, 2020.

Further, 71 cigarettes, 14 lighters, seven beedis and a 400 ml bottle of liquor were also found inside the parcels.

The parcels were seized by the prison officials, and they were handed over to the Borella Police Station for further investigations.

May 27, 2020 byTSM Web Desk No Comments
Popular musician Iraj Weeraratne, through his lawyer Prabuddhika Tissera, has fired a letter of demand to former Sports Minister Harin Fernando over a case of defamation of character.

May 22, 2019 byRandev No Comments
In order to solve the power crisis shortage, the cabinet of ministers has approved the purchase of 400 MegaWatts of emergency power for up to nine months.