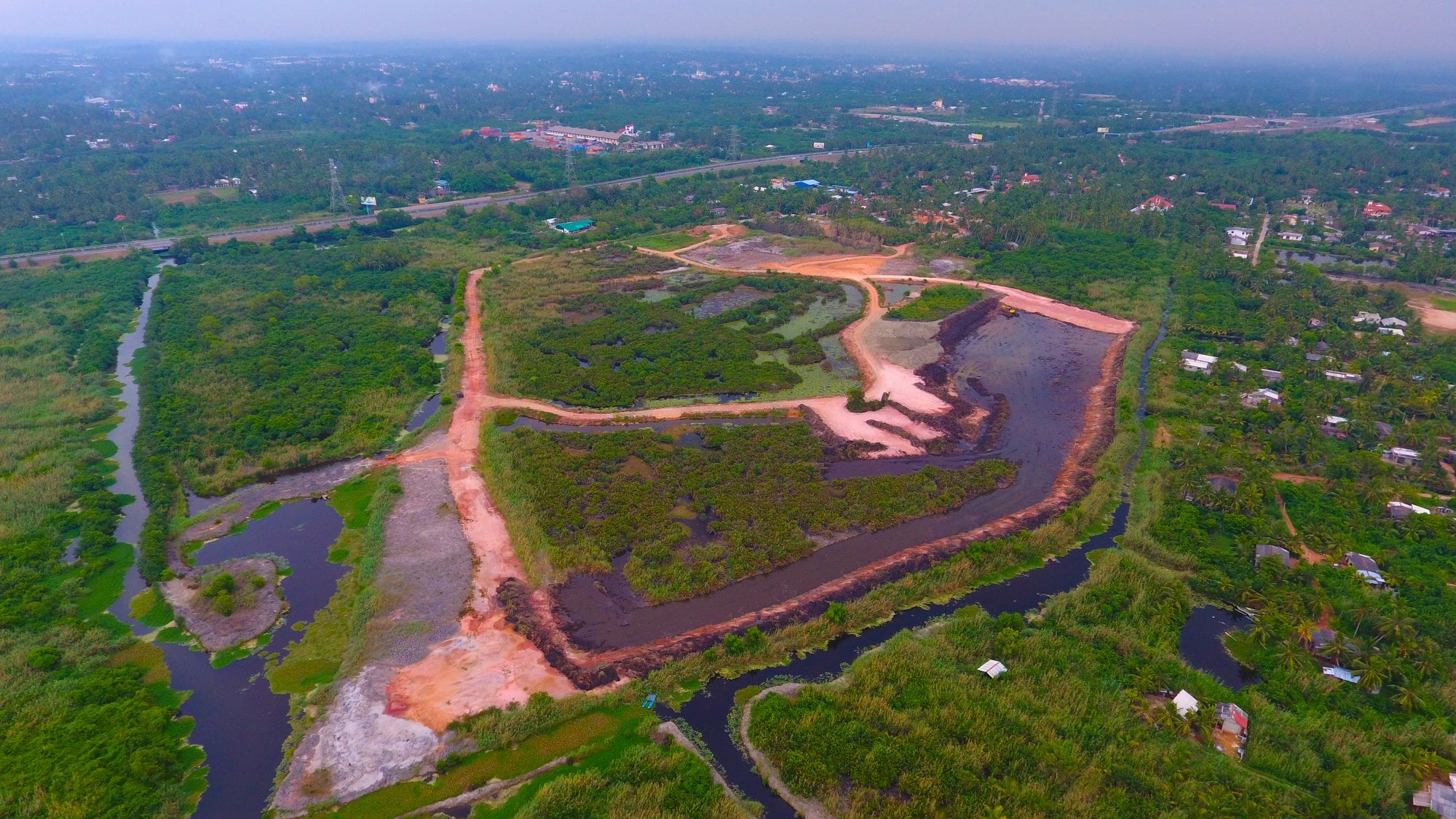 Believed to have originated nearly 7,000 years ago, the Muthurajawela marsh is identified as one of the country’s most important wetlands with its contribution to flood control as a critical flood retention area. The region is also home to 192 distinct species of flora and 209 distinct species of fauna, along with another 102 species of birds, some of which have been found to be indigenous to the marsh.

In 1996, 1,777 hectares of the northern part of the Muthurajawela marsh was declared a wetland sanctuary by the Government under the Flora and Fauna Protection Act, in recognition of its vast biodiversity.

Back in 2018, the Government in office at the time took steps to de-gazette a 110-acre area of land for a proposed liquefied natural gas (LNG) power plant, as a solution to tackle the country’s energy crisis, citing the importance of establishing more power plants to meet the current demand.

Thereby, the Government at the time approved the LNG power plant proposed to be established in Kerawalapitiya.

The project plans to fill nearly 100 acres in the Muthurajawela Urban Buffer Zone (UBZ), and according to the Environmental Impact Assessment (EIA) report for the project, a comprehensive hydrological and hydrodynamic analysis has already been carried out.

The location of the Muthurajawela Wetland Sanctuary exists in a rapidly developing urban area, making it an extremely vulnerable ecosystem, and considerable changes have taken place concerning the biodiversity of the Muthurajawela ecosystem over the past few years. Environmentalists opine that it is only a matter of time until the industrialisation takes its toll on both the buffer zone and the Negombo Lagoon in its vicinity, impacting not only the ecosystems, but the livelihoods of the people dependent on the lagoon.

According to renowned environmentalist and environmental lawyer Dr. Jagath Gunawardena, the land allocated for the LNG power plant project is a part of the buffer zone between the Muthurajawela Sanctuary and the already filled-up zone.

Reiterating that the buffer zone had been created to prevent the implications or adverse impacts from activity in the filled-up areas from seeping into the sanctuary, Dr. Gunawardena stated that releasing a part of the buffer zone sends out the wrong message in itself.

Speaking with The Sunday Morning, Dr. Gunawardena stated: “In addition to the environmental implications, there is also a possibility that this would impact the livelihoods of fishermen and people who are dependent on the Negombo Lagoon.

“When this project had been proposed initially, I tried my level best to see that this project would be shifted to a much more environmentally friendly location, rather than allocating land from the buffer zone, so it needs to be highlighted that not only would the sanctuary and the wetland ecosystem suffer an adverse impact, but it may affect the Negombo Lagoon, and ultimately create a chain reaction of problems in the process.”

According to Dr. Gunawardena, the buffer zone has become an absolute necessity at present, given that there is significant industrial activity going on in the close vicinity, and if the buffer zone is to be reduced gradually, it would undoubtedly set a bad precedent.

While the land for the project had been released from the Urban Buffer Zone of the Muthurajawela Sanctuary under a gazette notification issued in September 2018, the EIA that had been conducted recently states that the project site only takes up a mere 1% of the urban buffer zone, the sanctuary, and the Negombo Lagoon.

The report also states that although there is a possible loss of habitat for fauna and flora, there is ample space in the Muthurajawela Sanctuary and buffer zone area, and the buffer zone would also be rehabilitated to compensate for the loss.

A detailed assessment of the potential environmental impact of this project has also been conducted, where its approach has been one of mitigation by design, whereby some of the potential environmental impacts have been reduced, and although the EIA recommends an overall habitat management plan and strong mitigation, there still seems to be a lot of scepticism with regard to the project.

“We must also understand that by giving out the land in the buffer zone, the purpose of the buffer zone would not be achieved, regardless of the fact that the proposed power plant or any other project may not have any adverse effects.

“The point is that once it is built and there is significant human and industrial activity in the vicinity, the purpose of the buffer zone and between the filled-up area and Negombo Lagoon and the Muthurajawela Sanctuary, would be lost,” he further elaborated.

Speaking with The Sunday Morning, Ministry of Environment Secretary Dr. Anil Jasinghe stated: “This project has been in the pipeline for a while and had been initiated and approved by the previous Government. However, this is coming to fruition now. The land has been de-gazetted for the project and it will commence as planned.”

Furthermore, Dr. Jasinghe went on to say: “On the north side, we have a declared sanctuary for wildlife, and on the south side, we have the proposed LNG plant, as well as the Muthurajawela solid waste dump. There is a stretch of 162 acres of land in the middle, which would safeguard the sanctuary.”

July 27, 2022 byNews Admin No Comments
Six-time Prime Minister Ranil Wickremesinghe, who took oath as the eighth President last week, faces the daunting task of leading the country out of its economic collapse and restoring order after thr

Sunny Side Up: Local toddy for exports

December 19, 2021 byNews Admin No Comments
Locally manufactured toddy is the latest commodity to be added to Sri Lanka’s list of export items.