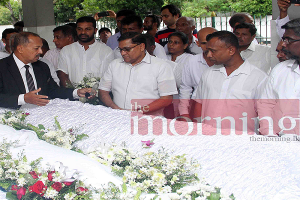 Many including politicians attended the funeral to pay their final respects.

February 21, 2020 byJennifer Anandanayagam No Comments
Prime Minister Mahinda Rajapaksa draws a letter from the 'Sinhalese Alphabet' in a ceremony held at the Independence Square in Sri Lanka's capital Colombo on Friday to commemorate 'International Mothe

May 31, 2021 byMihi Perera No Comments
Sinopharm vaccination was carried out in the Wellawatta area for all its residents.