November 10, 2021 by Dimithri Wijesinghe No Comments

As Sri Lankans, we are all well aware of the famous nai miris. Not to be confused with its equally feisty cousin the kochchi miris, this chilly, which is also known as “scotch bonnet” pepper, happens to be among the hottest peppers in the world, coming in at an astronomical 100,000-350,000 on the Scoville Scale. 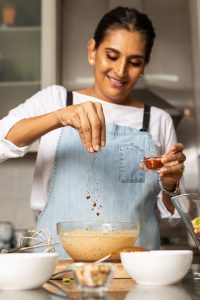 Tam’s Gourmet has gone ahead and bottled it into the most deliciously addictive sauce you’ll ever have.

Speaking to Founder Tamara Raymond, she shared that Tam’s Gourmet was once a byproduct of her restaurant Life Food Café, and while unfortunately the pandemic has not been kind to Life Food, which has since been closed, Tam’s Gourmet has gone on to take on a life of its own.

Tam’s Gourmet offers a number of bottled condiments, dips, salad dressings, and sauces, all of which are multipurpose – sauces doubling up as dips and vise versa. Tamara shared that having grown up in Melbourne, Australia, she had grown accustomed to things being very convenient and readily available. Surely, this was something that many mothers and cooks in general would appreciate – the convenience of being able to put in a drop of this and a drop of that and be able to create vibrant flavours without the hassle.

She shared that she first came across this particular idea for a nai miris sauce when she had it at a Mediterranean restaurant. As is her habit, she often attempts to recreate the flavours she loves, and so came along her own take on that sauce – although, Tamara’s take on the sauce is a lot more Sri Lankan.

She shared that she wished for it to have that distinct essence of the Sri Lankan tropics and so she included mango together with nai miris, and we have the Fire Starter Nai Miris Sauce by Tam’s Gourmet. 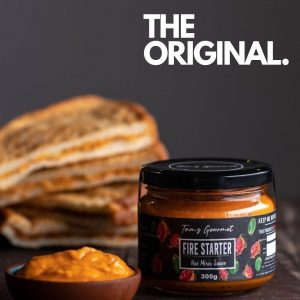 We really must confess that we have been more than a little obsessed with this sauce. Don’t get us wrong, there’s a bit of a limit to how much you can have, and Tamara herself shared that all you really need is a single tea spoon; it is recommended that you do not go overboard with the stuff. However, it is so addictive that you may find it difficult to stop at a single spoon.

We’ve been lathering it on every single food item we could find because it is simply delicious: The tangy mango paired with the burning but incredibly flavourful spiciness of nai miris is just something else. It is packed with flavour, and it truly is multipurpose. We have since used it in its diluted form as a salad dressing, as a meat marinade, and straight up as a sandwich spread.

At present, all Tam’s Gourmet products are 100% homemade and totally natural, about which Tamara shared that her intention was in fact to avoid preservatives and any potentially harmful additives. Best thing is, the sauce still has a comfortable one-year shelf life. Tamara added that while her products are currently available at eight different vendors, she wishes to expand and possibly have some of her products lining the shelves of supermarkets very soon. 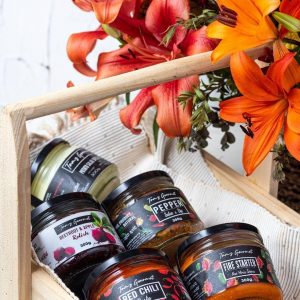 If you think you can handle the heat and like to hold onto the Lankan card of honour for spice tolerance, then we dare you to try the Fire Starter. See how your taste buds handle the challenge!

May 18, 2020 byJennifer Anandanayagam No Comments
According to Uber Eats Sri Lanka Lead Bhavna Dadlani, they’ve gone the extra mile in ensuring that both parties experience a smooth transition throughout these difficult times.

Werk – the community platform only for women