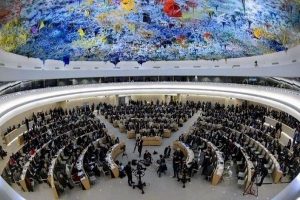 With the United Nations Human Rights Council (UNHRC) meeting at the end of next month in Geneva for its regular session, Sri Lanka has already commenced diplomatic-level discussions to secure support to counter any pressure which may be exerted on the new Government.

Government sources said that both Russia and China have already reiterated their support for Sri Lanka and similar support is expected from Pakistan and other countries that have in the past opposed any “interference” in Sri Lanka’s domestic affairs.

Speaking to Tamil newspaper editors last week, Prime Minister Mahinda Rajapaksa said that he did not expect any major developments in Geneva on Sri Lanka during the upcoming session.

He also said that at that time, the Government will be focused on the parliamentary election likely to be held in April or May.

Tamil political parties, which are usually very active in Geneva during the regular sessions, are also expected to place more focus on the parliamentary election.

However, he admitted that with elections due during that time, focus is unlikely to be on Geneva.

Premachandran participated in past Geneva sessions, but is now busy forming a new Tamil alliance under the leadership of former Northern Province Chief Minister C.V. Wigneswaran.

Wigneswaran’s alliance is preparing to contest the upcoming parliamentary election.

Last March, the UNHRC adopted a resolution on Sri Lanka, granting it a further two years to implement a previous resolution from 2015.

Resolution L.1 was adopted by the Council in Geneva without a vote after Sri Lanka announced it would be cosponsoring it.

The resolution “requests the Office of the High Commissioner to continue to assess progress on the implementation of its recommendations and other relevant processes related to reconciliation, accountability, and human rights in Sri Lanka”, and deliver updates at UNHRC sessions in 2020 and 2021.

Accordingly, the Office of the High Commission for Human Rights (OHCHR) will deliver an update on Sri Lanka at the session which begins late next month and continues till March.

The update will, however, find that despite some progress, Sri Lanka is still short of meeting the commitments it made since 2015.

The UK, which played a key role in the 2019 Resolution, is expected to exert pressure on the new Government to continue with the commitments made by the former Government on the human rights issue.

Focus is expected to be on the Prevention of Terrorism Act (PTA), which is yet to be repealed.

The former Government had assured that the PTA would be repealed and replaced with a new Counter Terrorism Act (CTA).

However, the new Government had decided to scrap the move, drawing criticism and concern from international human rights groups.

Government sources said that a fresh resolution by Sri Lanka, which will look to make the old Resolution null and void, has been proposed by the new Government and is likely to be submitted by the Sri Lankan Mission in Geneva at the upcoming session.

Sri Lanka will seek the support of the Council to be taken off the human rights agenda and to allow Sri Lanka to address its issues through its existing domestic systems.

Implementing past resolutions on Sri Lanka and other countries has been a costly affair for the OHCHR.

Last week, UN High Commissioner for Human Rights Michelle Bachelet sent out an urgent appeal to member states, seeking funds to carry out her work in 2020.

In the letter, Bachelet said her office would require a further $ 375.5 million to support vital existing programmes and equally vital new commitments this year.

In her appeal, Bachelet said her office will maintain the quality and scope of its support to the Treaty Bodies, Human Rights Council, and its mechanisms, including the special procedures and the Universal Periodic Review (UPR).

In addition, she plans to direct efforts to strengthening work in five key “frontier” areas that have already shown accelerating impact on fundamental human rights.

“Your financial support has been essential to the work of my office to date, and I take this opportunity to thank the 81 donors – among them, 65 states – who demonstrated their leadership, and their confidence in the office, by donating $ 177.4 million last year,” she said in the letter.

Bachelet had said that voluntary contributions by states, together with support from multilateral organisations, private foundations, and the corporate sector, have been the lifeblood of the assistance her office brings to the world.

“Although requests for our help have continued to increase, last year saw a decrease of some $ 10 million in voluntary contributions to our office as compared to 2018. In addition, new restrictions were placed on funding that had previously been freely offered, so that over two-thirds of the funds we received were earmarked – the highest proportion in the past 10 years,” she said.

The High Commissioner appealed to member states to provide unearmarked funds, so that the resources can be allocated to areas where they are most urgently required.

“I am confident that you have recognised the competence of the office and the relevance and benefit of our work. I am committed to deepening that focus on assisting states to protect rights and build more sustainable and resilient societies.

“I view this programme of work as a joint effort – one that requires your financial support, and many other forms of co-operation, to place human dignity and wellbeing at the centre of local, national, and global affairs. As we work to assist people and governments across the world, we count on your support,” she said.

July 15, 2021 byNews Admin No Comments
The Cabinet of Ministers recently reached a decision to establish nine Provincial level units with video technology to record evidence from children who have faced abuse, in a bid to avert inconvenien

April 26, 2020 byTSM Web Desk No Comments
Even the sanest of people do the craziest things when frustration gets the better of them. Donald Trump, by far, is certainly not the most rational person even at the best of times if his record is an